This task will track the racking and setup of 4 new lvs systems for eqiad. The hostname sequence will be lvs101[3-6]. These are replacing lvs1001-lvs1006.

right, so let's @Cmjohnson update firmware on lvs1016 NICs and I'll check MSI-X status after that :)

@vguiterrez I updated the firmware on lvs1016

@Cmjohnson I still see the same FW version from ethtool and same MSI-X:

So MSI-X limit can be changed on the NIC BIOS, it was set to 16 for enp4s0f0, after setting it to 32 and power cycling the server, lspci showed the proper MSI-X count and ethtool -L allowed proper configuration:

Change 432102 had a related patch set uploaded (by Vgutierrez; owner: Vgutierrez):
[operations/puppet@production] pybal: set lvs1016 as primary instead of lvs1003

For lvs1015, @Cmjohnson can you cable the following?

@Cmjohnson any updates regarding lvs1015?

lvs1015 idrac is setup, I think it's cabled correctly but I am not really sure, enp4s0f1 doesn't translate for me looking at h/w but I am pretty sure it matches the port order. I am not sure what you need from here to make it all work. I am attaching the picture of the mac addresses. 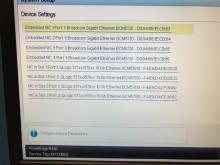 BTW, would you mind checking the ethernet firmware version and update them if needed (same as we did with lvs1016)

@ayounsi could you enable lvs1015 network ports? thanks!

@ayounsi could you enable lvs1015 network ports? thanks!

I added lvs1015 to interface-range LVS-balancer on asw2-c-eqiad, and to LVS-cross-row on the other 3 row switches, for the respective ports.

@ayounsi: I did notice two inconsistencies between the switches:

So this didn't seem to work, the "native vlan" setting in the interface-range didn't explicitly add the vlan until I manually added it. Now it appears to work:

From lldpcli everything looks good:

The way I did it on the other asw2- is to apply the MTU and access-mode directly to the interface-ranges, which means a few duplicated lines but more clear configuration overall.
I'm planning on making the configuration similar on asw2-d-eqiad when we retrofit that stack with a 3rd 10G member.

Note that codfw has access-port defined but not used, so this should be fixed as well.
EDIT: MTU set for all interface-range

asw2-a/b/c had the proper mtu set for all the interfaces-ranges except the LVS- ones, I added it and it's now running with a proper mtu.

In addition, I updated the task's description and included the ports for lvs1013 and lvs1014.

@ayounsi lvs1013 and 1014 on-site work has been completed. I did not add the LVS vlan....I will leave that to you. I still need to run the cross-connects but the servers can be installed.

Vlan is configured for eth0 of those two servers, the port is still showing as down though.
I also configured the vlan for their eth1 port.

Outside of immediate emergency situations, resolving any blockers to get the remaining two LVSes into service should be a very high priority at this point.

As best I understand the situation, the overall status is:

Context reminders: LVS servers in general, and eqiad LVS servers in particular, are some of the most production-critical machines that we have; virtually all important services both public and internal route traffic through them. They're also the front-line machines that are the first to see the brunt of anything nasty from the Internet once it gets past our hardware routers, and the legacy ones still in use only have 1G interfaces which can't cope very well, especially under denial-of-service attack conditions. We've been trying to replace those legacy machines since mid-2015 now and still haven't gotten there for various reasons, but there shouldn't be any major blockers at this point as far as I'm aware.

lvs1014 idrac is configured and is connected to all the switches

I don't think DC-Ops is holding this task up any longer.

Change 511118 had a related patch set uploaded (by BBlack; owner: BBlack):
[operations/puppet@production] lvs1015: switch A and B cross-row ports

Change 511118 merged by BBlack:
[operations/puppet@production] lvs1015: switch A and B cross-row ports

Note https://gerrit.wikimedia.org/r/c/operations/puppet/+/511118 - I had to switch the lvs1015 cross-row ports for rows A and B (enp4s0f1 and enp5s0f0) backwards at the software level to match the physical reality shown by lldpcli show neighbors, which was backwards from the documented table of ports at the top of this task. The current config works and we can keep it if we want. Note that I didn't make any other related changes, so if we keep this config, we probably need to edit the software port labels in the switch configurations to match, and possibly any physical labeling in the DC, to avoid future confusion. Alternatively, before we put this machine in service, we could physically swap the cables back to the intended config at the rear of lvs1015, revert the mentioned puppet patch, and reimage the server again. Either way, there's probably some followup to do on this.

After that, I think we should try re-pooling edge traffic and sit on this for a day or two, before we begin stopping service on all the legacy machines and removing them from puppet setup and router config, etc.

I am removing the ops-eqiad tag on this task, if you need additional dc ops work please add the tag back.

These have been in-service for a while now, closing!