For Chrome on Ubuntu Wikistats 2 has some element displacement problems in the line and map charts,
line chart issues have been already solved by another task:

For the map chart, the popup info box appears displaced under the cursor.
As my cursor doesn't show up in the screenshot, I added a red arrow where the cursor was. 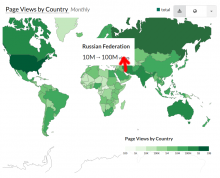 If you use other browsers you'll see where the popup should appear.

Which project is this about (Analytics ?) and where to find "Wikistats 2"?

This problem was solved by another task already.