This is a bug that has previously been fixed but has re-appeared.

On Trove (the Australian library content aggregator) everything comes with a pre-formatted Wikipedia citation which normally can be directly copied from Trove and pasted into Cite>Manual>Basic where it is "magically" transformed. Over the past day or so, this has stopped working and pasting the pre-formatted Wikipedia citations intto Cite>Manual>Basic stopped transforming.

while trying to add the citation for

Having found this newspaper article, the user went to the "i" in a circle on the left-hand tool bar which generates a number of citation formats 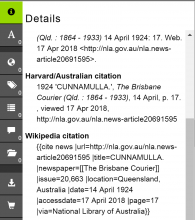 instead of doing this

as it normally does.

The problem was previously blamed on invisible characters / formatting within the text string when copied from the browser. However, the problem was fixed some time ago. The workaround was to paste the text into a absolutely-plain-text tool and then copy it out before pasting into Cite > Manual > Basic (I usually use Notepad on Windows). Unfortunately the club session was using a Mac lab (and none of us were regular Mac users) and we could not find a true "plain text" tool (we thought textedit should have worked but failed to figure out how to do it on its tool bar). The only way I could find to make it work with the group was to switch to source editor and add the citation that way. Unfortunately the group (who are mostly relative newcomers to Wikipedia) don't know source editor so I had to do that edit for the first person to experience the problem and the session collapsed as there was no way the users could continue on their own using VE.

In the Mac Lab we were using iMacs with Safari. However, I am also getting the problem at home with Windows 8.1 and Chrome, so it does not appear to be platform-specific. I am unaware of Trove undergoing any changes in this timeframe.

Please undo whatever changed and broke this. It was working beautifully before.

Mentioned In
T189556: Pasting long content is many times slower than inserting the same content in a different way
Mentioned Here
rGVED04137a1ed3fa: Localisation updates from https://translatewiki.net.

I note that we have 1Lib1Ref South starting May 15 so it's important that Visual Editor's citations are working OK with Trove citations since citation is the key element of the campaign.

Hurray, it is working again!