I was running into strange unit test failures while testing a PR, failures unrelated to the PR work, and (eventually) realized it was related to the primary language of the Simulator I was running the tests on. Some of unit tests rely on English language strings and US region specific formatting to be considered successes.

I think at minimum for the time being we should at least document that the unit tests require the device's language/region to be en-US. 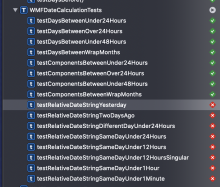