The WMCS project gitlab-test hosts a instance called gitlab-ansible-test, which was used for pre-production testing of GitLab configuration changes. The instance was setup before the migration from Ansible to Puppet (see T283076). The project gitlab-test also contains a dedicated puppet host and a gitlab-puppet-test machine which was mostly used to test changes for the pupptisation of Ansible code (see T283076). This instance is out of date and has no public ip (because of quota limits).

We have to decide if a dedicated puppet host is needed and if needed, how we want to manage this.
The old instances and the puppet host should be replace by a new instance, which uses the same code as production GitLab (and if needed, a fresh puppet host)

So I see the following steps here:

per the gitlab IC meeting we had today, the plan is:

After logging out and back in on Horizon you should see the new project in the drop-down list.

fyi, currently we have this situation: 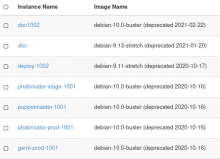 doc1002 - temp instance that was created to see if the role(doc) (doc.wikimedia.org) works on bullseye, but the "move doc to bullseye" project is stalled on the releng side. I have already created the new ganeti instances for this quite some time ago. should be deleted? but we need to check with hashar, maybe

doc - as above but on stretch, should be deleted? but we need to check with hashar, maybe

deploy-1002 - This is permanent. It is our local deployment server. This is so that gerrit/phabricator changes can be deployed like they are deployed in production, from a deployment server. Btw the "-" between name and number is supposed to be the correct naming scheme in this project.

phabricator-stage-1002 - This is a phabricator instance that is meant to be used for testing "new stuff". The type that does not have to be "like production". Hence it's called "stage". Anyone can use it. Would point Mukunda to this one first.

puppetmaster-1001 - This is our local puppetmaster. it stays around permanently. we can use it for gitlab instances too.

phabricator-prod-1001 - This is a phabricator instance that is meant to always be "like production", so unlike "stage" this should not be changed manually so that others can trust it is like prod.

gerrit-prod-1001 - As above but for Gerrit. The "gerrit-stage" should also exist in theory but does not right now.

So following this pattern I would make a new gitlab-prod-1001.

And yes, we are at quota limit. I think it's just "instance count" and not more specific about CPU/disk etc.

Part of the reason is that we also have the 2 doc instances in there that are just "kind of" related. (releng yes, but not really devtools).

I made T299561 to explain all that and ask for quota increase to unblock us here.

When applying the prod puppet role (role::gitlab) via Horizon and running puppet the status is:

Function lookup() did not find a value for the name 'profile::gitlab::active_host'

So next thing needed here is to add values in Hiera for cloud.

This could be done via Horizon or the repo and I would greatly prefer if we use the repo.

We should add a section for gitlab to puppet/hieradata/cloud/eqiad1/devtools/common.yaml in the puppet repo, merge continue here.

For now I removed the role again so that we don't get pinged for failed puppet on the instance. Will follow-up next Gitlab IC meeting.

btw, you can see here in Phabricator when someone changes roles on cloud VPS instances. example:

So next thing needed here is to add values in Hiera for cloud.

This could be done via Horizon or the repo and I would greatly prefer if we use the repo.

We should add a section for gitlab to puppet/hieradata/cloud/eqiad1/devtools/common.yaml in the puppet repo, merge continue here.

I prepared https://gerrit.wikimedia.org/r/c/operations/puppet/+/754063 for that. I amended a patch to use devtools instead of gitlab-test. This change adds the missing key profile::gitlab::active_host and various others.

We still need one additional floating IP in devtools (see TODO in change above). So I added this to the request in T299561.

Then re-applied the gitlab role on our cloud instance.

We will need next: "did not find a value for the name 'profile::gitlab::service_ip_v4'" (edit: so, yea, that is exactly expected, we wait for the floating IP). ACK

Also thanks for catching the floating IP part of our quota request!

Thanks to @aborrero our quota increase request is resolved.

We should now be able to have 2 additional temp. VMs at a time. So 2 of us could do a temp test at a time without touching the "prod" instance.

And we can now add the new floating IP to Hiera.

tested applying the puppet role after floating IP was added.

we will need "profile::gitlab::monitoring_whitelist" in Hiera next

The merge above fixed: did not find a value for the name 'profile::gitlab::monitoring_whitelist'

next issue is: parameter 'exporters' expects a Hash value, got Array

[operations/puppet@production] gitlab: parameter for exporters expects Hash but is array by default

[operations/puppet@production] gitlab: parameter for exporters expects Hash but is array by default

The "role::gitlab" (except same thing as prod) class is now applied on gitlab-prod-1001.devtools in cloud VPS andDOES NOT FAIL anymore. as in "puppet agent finishes". This is a nice step to achieve for now.

That being said we are aware there are some more follow-ups we'll have to fix, among them:

can't get certs from acmechief in prod

This is not the first time cloud VPS projects run into this though, so there should be ways around it hopefully.

[operations/puppet@production] gitlab: parameter to allow using either acmechief or certbot for certs

Alright! the TLS cert issue should be fixed with the above ^

at least in this sense:

Also the nginx issues disappeared from the puppet run!

We are getting there, step by step.

But we still have an issue with the installation of the gitlab-ce package.

I am trying to manually remove and install the package next.

this is not puppet-related anymore. Manually installing gitlab-ce also does this:

Puppet runs on gitlab-prod-1001.devtools.eqiad1.wikimedia.cloud now look good and succeed. I think it was mostly due to firewall/ferm issues and a bad nginx configuration (wrong cert path and listening addresses). The issues should be fixed with the changes above. I had to implement some WMCS/labs specific code because the floating IP is behaving a little bit different from production instances.

I've noticed that after some arbitrary time networking to the new instance stops working (no http/https/ssh possible). I try to find out what's going on there. A soft reboot from horizon webinterfaces fixes the issue.

I cleaned up the old gitlab-ansible-test instance together with floating IP and disk. I also added some docs in https://wikitech.wikimedia.org/wiki/GitLab/Test_Instance.

In yesterdays meeting we discussed that we may need some more automation for ephemeral/temporary GitLab test instances. So that bigger changes can be tested without altering the production-like test instance. I started to document the needed steps for a new test instance here: https://wikitech.wikimedia.org/wiki/GitLab/Test_Instance#Setup_new_test_instances I see quite some room for more automation and optimization.

I'll change the priority to low. The new test instance was most urgent. Having temporary test instances is not needed currently but will be relevant in the near future.

SSH access to the test instance is not working because of different networking behavior on WMCS/VPS. The public floating IP ("service ip") is NATed to the VM. So we can not bind on this address directly.
I requested a second networking port in T302803 and hope we can map/NAT the floating IP to this second port to replicate the production configuration (with NGINX and git SSH daemon listening on a different address).

I also created a new network security group for GitLab, which allows SSH access from everywhere.

With the help of @Majavah the correct configuration of private and public/floating IP was found. https and cloning over SSH works now. Thanks again!

The test instance https://gitlab.devtools.wmcloud.org/ should be usable for testing now.

I will create a dedicated, low priority task for the automation of new ephemeral test instances, so we can close this task soon.

I created a dedicated task to automate the test instance creation: T302976

I also changed the flavor of gitlab-prod-1001 to g3.cores4.ram8.disk20 because of some hard to reproduce networking issues (no http/ssh connection possible, reboot needed). I assume 4GB memory was not enough and critical processes got killed. This is a bit hard to troubleshoot without metrics and monitoring in WMCS. I'll keep an eye on the test instance to check if it happens again.

I'll close this task. The test instance should be fully functional now: https://gitlab.devtools.wmcloud.org/

If you need anything more or find any bugs, feel free to re-open this task.

Mentioned in SAL (#wikimedia-cloud) [2022-04-18T19:07:16Z] <mutante> - gitlab-prod-1001 randomly stopped working. we got the "puppet failed" mails without having made changes and can't ssh to the instance anymore when trying to check out why. trying soft reboot via Horizon T297411

running puppet after it came back showed:

puppet runs on the test instance gitlab-prod-1001 fail with

I'm reopening this task until we found a fix for that.

Does this only affect this instance or maybe all users who have a local puppetmaster in their VPS project? It seems like we haven't touched anything and it was working before and the error makes me think something changed somewhere upstream or alternatively..someone tried to switch between local project puppetmaster and regular global puppet master.

The admin sshd was listening on 0.0.0.0, which interfered with GitLabs ssh daemon.

I fixed it by setting profile::ssh::server::listen_addresses explicitly for the admin sshd. See changes above.

@Dzahn @brennen I'm closing this task. From my understanding the test instance is functional and the puppet error should be fixed. Feel free to re-open in case anything is missing.