Expected:
Typing "Wikidata" should have the exact match appear on top of the list. And if not, it should at least be included in the suggestions. Especially because the interface requires the user to select an autocomplete item. It cannot be entered manually or directly.

Actual:
Only other projects appear, and the list is limited to 5 results.

Other:
I tried working around it by adding the unrelated projects first and perhaps removing them later, but the already added project still appear in the autocomplete list, so there's no way around it that I can see. (Short of working around the entire interface by leaving a comment mentioning it, since that associated it as well). 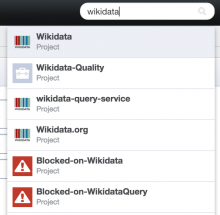