Not an issue anymore these days due to customization ( Auth > Customize Messages > Login Screen Instructions): 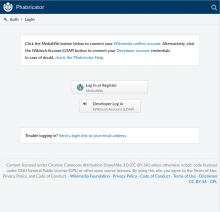 That's not the login screen I get when I browse in an incognito browser:

@Aklapper I thought the login page we have here on phab was custom and done by us?

Could the button text be centered and make the buttons the same width?

I can't reproduce either (I switched from english to french)

You could try using ?safemode=1 which should disable user js and css and see if it still happens. @Schnark

TerraCodes added a comment to T227699: Creating a Commons gallery page incorrectly states "This entity does not exist.".

Could you link the page its showing that on? When I try to reproduce it I don't see any message like that.

I can see properties on the page too, @Bugreporter does it still not show any results for you?

Maybe add an option to disable it as a wg* variable or as a user preference? That way wikis/users who want to disable it can, without fully removing the feature for people who want it.

TerraCodes closed T239381: Preferences do not remain disabled as Resolved.

(marking as resolved rather than invalid because I think the issue went away, rather than there not being an issue to begin with)

TerraCodes added a comment to T239381: Preferences do not remain disabled.

The only thing in the console when I test it on meta is JQMIGRATE: Migrate is installed with logging active, version 3.0.1, which I'm pretty sure isn't related to this.

This got uploaded to the wrong phab instance.

TerraCodes added a comment to T239186: Language section in navigation sidebar shows up even if empty.

Would it be possible to add a way to disable/hide it then?

That is already possible: You can write your own custom CSS to hide it.

Nov 28 2019, 9:59 AM · UniversalLanguageSelector
TerraCodes added a comment to T239186: Language section in navigation sidebar shows up even if empty.

Would it be possible to add a way to disable/hide it then? Maybe by moving the language settings into Special:Preferences with the rest of the preferences, or by adding a preference to hide the language sidebar when empty? Because I find it annoying thats its taking up space on my screen despite being empty and unless (since theres no languages in the section).

TerraCodes created T239186: Language section in navigation sidebar shows up even if empty.
Nov 26 2019, 5:31 AM · UniversalLanguageSelector

(this patch was a pain to get sent for review because I accidentally used the wrong email/name when committing it, why can't we use something thats easier to use like github or phab?)

(this patch was a pain to get sent for review because I accidentally used the wrong email/name when committing it, why can't we use something thats easier to use like github or phab?)

@TerraCodes are you still planning to work on this?

TerraCodes added a comment to T188200: Allow signatures to be global.

Hm, something I thought of when suggesting this on another wiki farm was to make the signature global, but only if "use wikitext" wasn't checked. Maybe that would help here?

It works fine on Firefox because they fixed it (https://bugzilla.mozilla.org/show_bug.cgi?id=1510862), so its just Chrome, which is still a lot of users. Also, I believe the patch was only intended to be done temporarily until browsers patched it, which Chrome still hasn't done.

TerraCodes added a comment to T215071: Merge Wikipedia subdomains into one, to discourage censorship.

However note that in the event that your browser can't support TLS v1.3, you won't be able to view the page at all

Hey, my browser supports it, because I did these steps:

Yeah I checked, but it seems that I wasn’t BCCed? Unless the headers/my clients don’t show BCC I guess.

@Reedy that might be a good idea, since I'm now getting email that's being spoofed (eg, it says it's to security@tools.wmflabs.org but I somehow got the email).

@Reedy that might be a good idea, since I'm now getting email that's being spoofed (eg, it says it's to security@tools.wmflabs.org but I somehow got the email).

It looks like the content is blacked out via site css, maybe due to the protest about Article 11 and Article 13 happening today?

TerraCodes added a comment to T10912: The "Prompt me when entering a blank edit summary" wrongly triggers for undo edits.

TerraCodes added a comment to T71550: Move code in enwiki MediaWiki:Common.js and Gadgets to MediaWiki software.

"(This loads the base style for the watchlist. Please do not disable this option.)" in enwiki's gadgets is probably a good candidate for moving into the codebase too.

Isn't $wmf* better than $wgWMF tho?

That depends. The Config abstraction layer in MediaWiki maps logical names (e.g. "ArticlePath") to a global named $wgArticlePath. If we used "wgWMF", these variables could (in the future) be managed through the same system, interacting with $wgWmfRealm as "WmfRealm".
Anyway, that's a later step. We can at least standardise first on one of the two patterns we already use (wmf* -> wmg*).

TerraCodes added a comment to T199012: Gerrit's "Show Diffs" button does not always expand all diffs for each changed file.

I could reproduce for a minute but then it worked. It's because that file is large.
So i would call that expected behaviour. Just need to wait for it to open :)

@TerraCodes The ones we've seen for the recent blackout, as I was saying. Itwiki had more ore less three days to decide for a blackout, and there has been some uncertainties until one hour before the effective blackout. Other wikis have had even less time, and in order not to be late they opened short polls (we're talking of a matter of hours, not days), for instance cawiki. Some wikis actually ended up with nothing done because of not enough time left to vote, for instance elwiki. In such a situation, where time is really crucial and should be spent in reaching consensus, communities should have a quick way to enforce their decision. At any rate, this is the classical situation that you can't actually foresee, and for which we need to be ready, no matter how rare such situation could be.

Tho I'm suddenly unable to reproduce this now?

What emergency situation(s) would require a blackout of a whole wiki?

Jul 7 2018, 5:41 AM · Performance-Team (Radar), Patch-For-Review, MediaWiki-extension-requests
TerraCodes added a comment to T190015: Create separate user group for editing sitewide CSS/JavaScript that does not include administrators by default.

Both this and T71445 are useful things to do.
T71445 hasn't happened yet because it's much more complex to design and build.

Actually it can be something like:
Re-introduce superlock which locks these css and js pages.
Let those pages be edited by the staff usergroup only, or whatever.

Can "Deployment servers" be checked off since the two tasks next to it are resolved?

Thanks for the note, I just fixed that.

Can "Deployment servers" be checked off since the two tasks next to it are resolved?

Was this the vandal that changed the names of tasks into gibberish? And unsubscribed AKlapper?

Just for a note, why not add a button at Phabricator to enable reverting to an earlier state?