Based on observations from recent user research (T207831) and design reviews, the relation between the collapsed (summary card) and expanded (issue details) is not always clear. Similarly, the connection between the issue card and the marks in the document can be also strengthen.

The changes proposed to the original design of issue cards (T189488) are described below:

You can check the proposed approach in a basic prototype

Use a chevron for expanding and collapsing

We want to distinguish the yellow/red marker that is shown for the active issue that is expanded:

Inspecting the current code, an example is shown below for a possible adjustment:

Change 477584 had a related patch set uploaded (by Petar.petkovic; owner: Petar.petkovic):
[mediawiki/extensions/ContentTranslation@master] Use a chevron for expanding and collapsing of issue card

Change 477584 merged by jenkins-bot:
[mediawiki/extensions/ContentTranslation@master] Use a chevron for expanding and collapsing of issue card

Checked in wmf.9 - all specs seem to be in place.
(a) error/warnings 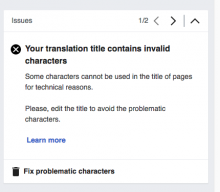 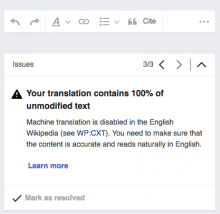 @Pginer-WMF , please review the following before marking this ticket Resolved.

(1) There are somewhat noticeable although small issues filed in https://phabricator.wikimedia.org/T212436

(2) (minor) The contrast between active/inactive errors is rather low - #222222 #72777d. The arrows are small and what works perfectly in terms of contrast for VE options in the toolbar is not that clearly visible for the issue card navigation arrows.

@Pginer-WMF , please review the following before marking this ticket Resolved.

Thanks for the review, @Etonkovidova.
I think the result is good for the purpose of the ticket. We need some adjustments on how the different cards appear and move (T212436) and some minor styling adjustments, but follow-up tickets can be created for these.