The general structure for the empty states is:

The specific cases to support are illustrated below,

When the list of languages is empty because no options are available at all, the empty state is shown: 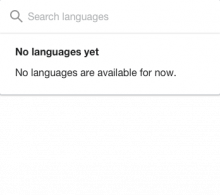 No languages are available for now.

The app using the selector can define actions to support users to add the missing languages. For example, on Wikipedia those could lead to Content Translation. In this case, the specific app would customize the description and the list of actions.

Although other actions should be possible, we want to make sure that the example of Content Translation integration works.
In this case, the actions would link to Content Translation with the article pre-selected to start the translation. Two specific target languages are provided based on suggested languages (excluding the current language which is used as source). A generic "more" action is provided where the target language will be selected by the user. 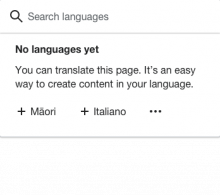 You can translate this page. It’s an easy way to create content in your language.
[Language 1] [Language 2] [More]

Searching a language that does not exist

When the user searches for a language that does not exist in our database of all languages, the empty state is shown. In this case, the user is encouraged to review the spelling and informed of alternative ways to search for the language. 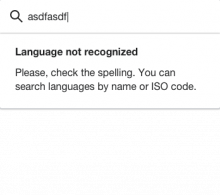 Language not recognized
Please, check the spelling. You can search languages by name or ISO code.

Searching a language that exists but is not supported 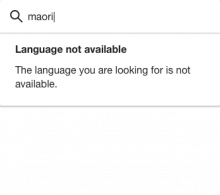 Note that the user search query can result in multiple unavailable languages (e.g., searching for "esp" could lead to this empty state if content is not available for both "español" and "esperanto"), so the generic version of the message does not mention a specific language. For cases where the search query identifies only one language, the title message would include it (e.g., " Esperanto not available").

The app using the selector can define actions to support users to add the missing languages. In this case, the languages surfaced would be those matching the user search. Additional suggested languages can be used to fill the remaining actions. 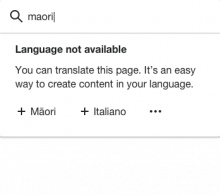 Language not available
You can translate this page. It’s an easy way to create content in your language. Change 635505 had a related patch set uploaded (by Santhosh; owner: Santhosh):
[mediawiki/extensions/ContentTranslation@master] POC: Renderless language selector and custom selectos based on it

Change 635505 abandoned by Santhosh:
[mediawiki/extensions/ContentTranslation@master] POC: Renderless language selector and custom selectos based on it

Reason:
It was just POC