Hi, I have created an SVG (attached and at https://commons.wikimedia.org/wiki/File:Vector_saturn.svg ) which demonstrates four big librsvg bugs very prominently. The file should render correctly in Inkscape.
A correctly rendered PNG can also be found on commons under the name File:Vector saturn (Correct render).png.

The bugs shown are:

Not dependent on the blur size in Inkscape—for example, in Inkscape, a very small object may have a blur size of 10, but still disappear in librsvg.

4—Failure to correctly render blurred objects on the edges

Thanks for taking the time to report this and attaching the great testcase.
For future reference, one problem per report is welcome, as this report is unfixable until four different issues are fixed.

Fix included in version 2.40.10 which got released yet. Now need to backport or need to wait for the distribution used on Wikimedia servers to provide that version....

For which aspect of this bug exactly (as there are four listed)? All?
Feel free to click "Upstream" in the list of projects and drag the task to the "Merged in upstream" column if you're sure. :)

Oh, I think not but at least partly. Need to try out this, but won't have time until 31. October.

That's not fully fixed in 2.40.16: In comparison to https://commons.wikimedia.org/wiki/File:Vector_saturn_%28Correct_render%29.png the re-rendered version still shows the info box on broken rendering and the shadow is missing.

We'll unfortunately not be able to easily upgrade to 2.41.0 at this point; librsvg started to implement parts of the code in Rust and Debian jessie does not yet provide the Rust toolchain.

the re-rendered version still shows the info box on broken rendering and the shadow is missing. 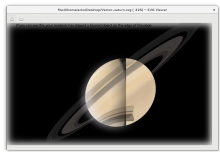 As I have no idea which of the four issues described in the task description still apply, can someone who has more knowledge of SVGs please file specific bug reports (one per issue) at https://gitlab.gnome.org/GNOME/librsvg/issues/ ?

There's no change in rendering between 2.44.10 and 2.50.1. The remaining issues appear to be T193942: fill using radialGradient not rendered and 4—Failure to correctly render blurred objects on the edges. The background extends outside of the SVG boundary, where a blur is applied. rsvg moves the blur inside the boundary.

Rendering of librsvg 2.51.1 compared to resvg, chrome, batik and Inkscape and others.

I think the issue should be slitted in minimal (not) working examples, this can also help identifying if the svg-file is broken or the rendering is wrong.

Aklapper updated the task description. (Show Details)May 14 2021, 8:44 AM2021-05-14 08:44:07 (UTC+0)
Aklapper moved this task from Backlog to Reported Upstream on the Upstream board.
Aklapper removed a subscriber: • wikibugs-l-list.
JoKalliauer changed the task status from Open to Stalled.Jun 29 2021, 9:50 PM2021-06-29 21:50:03 (UTC+0)
JoKalliauer moved this task from Backlog to librsvg (upstream) on the Wikimedia-SVG-rendering board.
Log In to Comment
Content licensed under Creative Commons Attribution-ShareAlike 3.0 (CC-BY-SA) unless otherwise noted; code licensed under GNU General Public License (GPL) or other open source licenses. By using this site, you agree to the Terms of Use, Privacy Policy, and Code of Conduct. · Wikimedia Foundation · Privacy Policy · Code of Conduct · Terms of Use · Disclaimer · CC-BY-SA · GPL