While from the processing point of view (backend of the frontend) it is pretty stable, the actual user interface is still mostly a proof of concept to expose the functionality.

And the dialog as-it-is (which isn't ideal, but could work as initial deployment maybe), also has various issues (see attached screenshot, should mostly speak for itself):

We should also think about how the user is introduced to the functionality. Right now it injects a more or less random button into the EditPage on its own block-level row. That position isn't suited for this, will likely interfere with existing scripts and things, and isn't an API for buttons. Maybe it should go in the sidebar, or the tab bar, or the content action menu, or integrated in the WikiEditor toolbar, or something that isn't like it is now which is just a temporary way to insert it somewhere on the page. 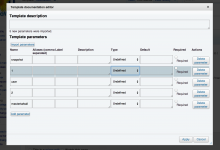