Use (and improve) the ULS language list to facilitate language selection on the "new translation" dialog.

As a user, I can easily select my languages of interest so that I have a clear idea as to whether my usual languages are supported and can select them quickly. 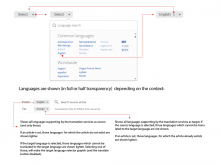 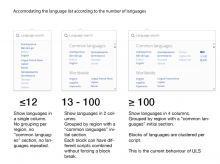 Change 174094 had a related patch set uploaded (by Nikerabbit):
ULS for source and target selectors

Change 174094 merged by jenkins-bot:
ULS for source and target selectors

ULS adjustments for map removal were described at https://wikimedia.mingle.thoughtworks.com/projects/language_engineering/cards/4017

Change 177536 had a related patch set uploaded (by Santhosh):
ULS width according to the number of languages

I also noticed that the "Common languages" section was not appearing on labs instance where many languages are available. I expect that section to appear (as it does in ULS) when there are more than 10 languages to facilitate the selection of usual languages for users.
This is already part of the designs, but making it explicit here just in case it helps.

Also related to language selection, we have this comment from the talk page:

when you click "start new translation" it appears two languages selected by deffault (in my case, spanish to catalan)
if you don't click the languages again to "re-select them" I can't start translating.
Hope it clarifies it all. Would be great that, if one language appears as pre-selected, it actually is :-)

The expected behaviour is: Given that I have selected "Spanish (source) to Catalan (target)", just by changing the target to Spanish, the resulting selection should be "Catalan (source) to Spanish (target)". The same should happen if the source is changed from Spanish to Catalan.

This was described (and implemented) in the original language selection card, so feel free to refer to it for more details.

@pginer These regressions are fixed in the following patch which has not been merged yet. I took care of all language selection issues, I believe.

The commit is associated with the following task:

Needs a review for the task to progress: https://github.com/wikimedia/jquery.uls/pull/171

Change 177536 merged by jenkins-bot:
ULS width according to the number of languages

Change 195443 had a related patch set uploaded (by Amire80):
Save the selected language to ULS's previous languages

Change 195443 merged by jenkins-bot:
Save the selected language to ULS's previous languages

(This latest patch shows the Common languages only when there are more than 12 languages to show.)

Change 202710 had a related patch set uploaded (by Amire80):
Update from upstream

Amire80 mentioned this in rMEXT4b8d37f9c2e1: Updated mediawiki/extensions Project….Apr 8 2015, 2:01 PM
Amire80 mentioned this in rEULSe65202b434d3: Update jquery.uls from upstream.
Amire80 closed this task as Resolved.Apr 8 2015, 2:07 PM
Amire80 removed a project: Patch-For-Review.
Amire80 edited a custom field.
Amire80 moved this task from In Progress to Needs More Information on the Language-Team board.
Log In to Comment
Content licensed under Creative Commons Attribution-ShareAlike 3.0 (CC-BY-SA) unless otherwise noted; code licensed under GNU General Public License (GPL) or other open source licenses. By using this site, you agree to the Terms of Use, Privacy Policy, and Code of Conduct. · Wikimedia Foundation · Privacy Policy · Code of Conduct · Terms of Use · Disclaimer · CC-BY-SA · GPL