The generated MediaWiki PHP documentation has an Introduction section. All the sections under this in the left-hand nav (Introduction > Introduction, Setup, File Operations...) come from includes/filebackend/README. The intent in the README markup is they should appear in a separate File Backend section:

Two Doxygen commands were conflicting in the README file: \page and \ingroup. I removed \page and inserted the text as a detail description for the FileBackend module, in FileBackend.php's \defgroup.

I believe the text in question makes more sense as a detail description of the module, but the original README file is still there, conditionally excluded from Doxygen, in case someone wants to keep the extra text as a separate file.

Thanks for looking into this!

Two Doxygen commands were conflicting in the README file: \page and \ingroup. I removed \page

That change alone makes the text disappear from the Introduction section (good), but it also gets rid of it from the Modules >File backend section (bad).

and inserted the text as a detail description for the FileBackend module, in FileBackend.php's \defgroup.

I think that's overburdening the PHP file. It's fine to have a separate README, we have several in our codebase. We want a lightweight way to

Doxygen 1.8 supports markdown files. I don't know if these three things are easier if we change the file to README.md.

We want a lightweight way to

I'm curious where 2 and 3 are visible. Right now, I'm not seeing a link to the README in group__FileBackend.html or a "File backend design" link anywhere in the sidebar. There is some longer form content that appears on classFileBackend.html, but it comes from FileBackend.php.

With Markdown support enabled in Doxygen, we have the option to generate this page by converting it to Markdown. I've opened https://gerrit.wikimedia.org/r/c/mediawiki/core/+/539439 as an example of what this would look like. To summarize:

Including similar files for FileRepo and JobQueue, the resulting navigation looks like this:

I fiddled around a bit and found something that might work. First, the outcome: 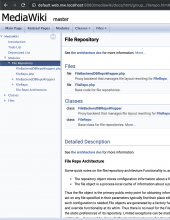 Note how the Arch section is in the sidebar within the relevant module sub-menu, not in the root list. This is the outcome we want. Yay!

I got there by adding @ingroup FileRepo to the top of architecture.md.

The downside is that the formatting of the actual content gets funky. The first paragraph and bullet list of the architecture page renders fine, but then subsequent paragraphs don't render right. I'm not sure why that is. And, while the menu is great, the result of clicking it isn't a dedicated page. Instead, it's a "very large footnote" at the bottom of the index page for the given module group. It's essentially acting as if this Markdown file was part of the @defgroup block.

Nice! I was able to get the paragraphs to render correctly by putting @ingroup FileRepo above the title, but, as a result, Doxygen nests the file under the filename in the sidebar:

Although not ideal, I think this behavior is ok, at least for a first step.

Nice. Yeah, that seems fine. Could you upload the updated patch to Gerrit?

Yep! I'll do that later today.

It looks like https://gerrit.wikimedia.org/r/539439 did not completely solve this issue. The new pages now appear nested under the code of conduct page. I'll experiment with how to resolve this, but I'm not sure how this is happening. Additionally, it looks like we'll need another exclude pattern to account for https://doc.wikimedia.org/mediawiki-core/master/php/md_maintenance_benchmarks_README.html

I've opened a patch for the new exclude pattern, but I wasn't able to find a way to get the class-level Markdown files to not nest under the code of conduct while still having the Markdown formatting render correctly. We'll need to decide whether to revert https://gerrit.wikimedia.org/r/539439 if we can't find a solution for this.

It being categorised as subpage of "Code of Conduct" is quite mysterious indeed. I am unable to find a link between these pages that would cause Doxygen to associate them.

What happens if we exclude that file from the index (given it isn't needed in the Doxygen output). Do they move to another mysterious place?

Interesting results: When I excluded the Code of Conduct page from the Doxygen output, the new pages appeared nested under the Introduction page, which is the outcome I was expecting originally. However, when I added another Markdown file (converting one of the /docs .txt files, for example), the new page appeared nested under that Markdown page. I experimented with creating a dedicated landing page, but it seems that Doxygen randomly selects a Markdown page under which to nest the pages tagged with @ingroup. Since we eventually plan to convert the /docs .txt files to Markdown, I don't think excluding the Code of Conduct is a viable solution here.

One idea that could work is to remove the ref links from the page titles. This results in the outcome described above in which the navigation renders correctly, but paragraph breaks within the pages aren't respected. Although a bit hacky, I was able to create paragraph breaks by adding <br> tags to the ends of paragraphs. I've opened a patch to illustrate this (inelegant) solution and included a screenshot of the result:

The only other option I see is to revert the conversion to Markdown and try to render the text through another file format, although I'm not sure what this would look like.

Hm.. yeah, so for now I'm thinking maybe it's not so bad if we keep them as normal top-level pages, with "JobQueue Architecture" being there alongside "Introduction", manually linked from a related group or class description. Basically what we have now, but without the @ingroup trick.

That seems to produce no surprising side-effects and seems easy to reason about, even if it's not (yet) the hierarchy we originally wanted. Thoughts?

Sounds good to me! I'll open a patch.

I'm untagging Green team; I can't confirm this either way. @apaskulin can you close this if it's done?