Follows-up from T167885: Regression: Backend Save Timing raised by about 50%

Restarting a server causes APC to get cleared since it is part of the same process. While it might be nice to preserve it somehow, I think we've gotten used to this being the case and accepted this. It has also become an unfortunate, but regular habit, to restart HHVM when APC usage grows out of hand (given HHVM doesn't do LRU garbage collection and just lets itself OOM if not enough keys expire in time).

Regardless, the recent HHVM upgrade did *not* cause a memory drop like usual, but rather an increase.

On the other hand, looking at HHVM APC Usage (which is what initiated this investigation) on an individual app server, I do actually see a drop (as one would expect, since an upgrade involves a restart, and as such all cache keys in memory are meant to be lost). 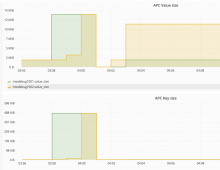 This also shows clearly that APC keys are correctly cleared as part of an HHVM restart.

The overall usage across the cluster also looks to have stabilised since the upgrades/restarts.

Perhaps the base footprint is a bit higher in the new HHVM, or perhaps we're using APC more in MediaWiki in general, but there doesn't appear to be a problem with restarts not clearing APC, and it certainly hasn't doubled nor is it otherwise retaining previous keys.

Resolving this task as such.