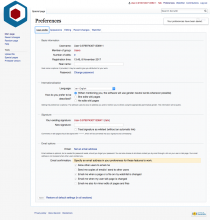 31f87d19e56a is just before the problem was introduced.

When saving the user preferences, the return page is generated with a cached and outdated User. I haven't dig into it beside hinting at git bisecting it.

This looks like an integration issue with ChronologyProtector vs WANObjectCache.

Within a request, during and even after the master DB transaction, the web request will not see the DB changes it made (committed or not) unless it uses the DB_MASTER. Cached values always use DB_REPLICA, so they remain stale during the request. This is fine, as calling code is expected to stick to user DB_MASTER loaded data when using reads to determine writes or show things to the user on POST requests that do *not* send redirects in response. This didn't change with 6b2f13b055c8.

Via ChronologyProtector, the next HTTP requests by the user after their last one that changed stuff go through the trouble of waiting for the replica DB to catch up to where the master was right after those changes were committed. MediaWiki therefor sees the changes from that prior request in the next one. Previously, WAN cache totally disallowed* any caching for tombstoned (recently deleted) keys for HOLDOFF_TTL seconds. That meant that the keys the user causes to purge (due to DB writes) in the prior request always ignored the cache and used the replica DB itself.

However, after 6b2f13b055c8, for cached values, they are still stale due to interim keys on the next request since the up-to-date (via the above logic) replica DB is not used if there is a tombstone and interim key.

So I see what is likely happening here:

The simple thing is to not set INTERIM keys in the same request that purged them. The duration of that rule would be HOLDOF_TTL so that the array holding the purged keys doesn't get too big for long-running maintenance scripts. This can be done with a HashBagOStuff nested in the WAN cache object easily enough.

That would leave open race conditions though, where it's *another* request by another user that saves back stale values.

An even simpler, more correct, way would be to disable use of INTERIM keys on any request that still has to wait for DB replicas to catch up. ChronologyProtector only keeps master positions around for a user for POSITION_TTL seconds since the last write by that user (it assumes that lag is gone by then). After that, there is no replication lag waiting anymore. The INTERIM key TTL is 1 second, so it is unlikely that a stale value would blip back for that user and then go away around this time. That said, such dependencies should be visible in the code somehow.

The question is how to do that in a way that is not super specific for being in WAN cache, in terms of separation of concern.

I noticed a worse bug of cpPosTime cookies not being used (not related to WAN cache). The patch for that is above.

I noticed a worse bug of cpPosTime cookies not being used (not related to WAN cache). The patch for that is above.

I've untagged this task from that commit, since that really only matters in multi-DC or replicated "main stash" stores, which does not apply to us atm.

zeljkofilipin moved this task from Blocked (externally) to Done (within RelEng) on the Release-Engineering-Team (Kanban) board.Nov 29 2017, 6:43 PM
gerritbot added a comment.Dec 1 2017, 12:04 AM
Comment Actions

it's in our respective done columns, so is it resolved? :) :) Things left to do?

@greg the only thing I did was report the problem. It's hard for me to tell if it's resolved. As far as I am concerned, it can be removed from Release-Engineering-Team (Kanban).

Does this still occur?

Does this still occur?

This is happening again. I can reproduce it when targeting mediawiki-vagrant manually or by running selenium tests.

@zeljkofilipin given the cause is different, we should file separate bugs for these failures. Otherwise we would have long living "Some test is failing" tasks that are always re-opened. Also, re-opened tasks can be lost in the noise. Looks like it's still the same team/person though, at least ;)

@zeljkofilipin given the cause is different, we should file separate bugs for these failures.