Do log errors with no url or file_uri instead of dropped from client side error instrumentation
Closed, ResolvedPublic
Actions

Errors that have no file_url or url are dropped by our client side error instrumentation.
For modules in Chrome, certain errors (currently only reproducable for ResourceLoaderWikiModule modules) are unexpectedly being triggered without this information so are correctly being dropped. We would like these errors to not be dropped but for that we need to ensure they carry the required information.

Put the following code inside MediaWiki:Common.js

and visit a page in the Chrome browser.

The error will be reported with an empty url, no file_url and anonymized stack trace.

The issue does not seem to impact issues inside the code itself. When I put the same code in ~/git/core/skins/Vector/resources/skins.vector.js/skin.js the file_url and url are both present.

Absence of a URI doesn't have anything to do with wiki modules specifically. It applies to all modules once they are cached. If anything, wiki modules are cached less often due to them sometimes being user-specific or uncacheable for other reasons. I believe this is why we are seeing a disproportionate amount of errors from gadgets (and much fewer from our own deployed code), exactly because this issue is not affecting wiki modules such as gadgets as much.

While local storage execution has no URL (browser UIs sometimes call this "VM:123" or "(anonymous)" but it seems file_uri remains empty since these aren't valid URIs), it does have a stack trace.

I think it would make sense to simply remove this check, and instead check only for absence of a stack trace, which I suspect was the intent of the check intially - on the assumption that file_uri would be the first uri in any multi-line stack trace. However, we now know that this is incorrect.

leaving aside the known issue that almost all client errors are currently being dropped due to the faulty file_uri check.

That's not correct. As I've pointed out in my investigations in T266517 it looks like we're only dropping client errors in Chrome from ResourceLoaderWiki modules […] I encourage you to do your own investigations here. I am sure you will reach the same conclusion.

Some evidence that goes against your theory:

I already did. I wouldn't have said this based on a theory.

When following T262947's task description steps in a fresh Chrome browser with no previous Wikipedia page views, we find an error with a long load.php URL for many freshly fetched modules. When reproducing it again after a refresh, or more generallly on non-initial page views, we still find a load.php URL associated with the error, albeit a much shorter one. This time it fetched only jquery.ui and Kaltura. It having such a URL means it didn't load from localStorage cache.

This is because TMH uses jquery.ui, which is larger than our 100 kB threshold for modules cached in localStorage. As such, they always load from a URL. (From the third page view on, these will enjoy fragmented client-side HTTP-based caching instead).

OK. Let's take a closer look. Upon loading the mw-client-errors Logstash dashboard (without any filters enabled) the top five user agents are:

Firefox being more common than any of these major browsers, whilst saddening to my heart, should be suspicious no matter what. Yes, combining the two Chrome patch releases would, just about, give Chrome the top position as most common UA. Having latest Firefox be 80% of Chrome's share is still highly suspect though, and that's before we even filter out unrelated noise from Chrome extensions.

When focussing on the top Chrome version only, I find from spot-checking the top 10 most common error messages that the majority falls in one of two categories:

All others are from page views where the faulty code was either loaded for the first time on that page and thus not yet cached, or from modules like TMH that are too big for localStorage.

I think it would make sense to simply remove this check

I don't doubt we are dropping events, but right now I am not convinced that we are dropping them significantly. Flooding logstash with errors that cannot be easily debugged due to anonymous stack traces and absent file uris would only give us inflated numbers and more noise to contend with, not alert us to new unknown errors. As the main person championing this it would also cause me unnecessary work.

When the change ( (I9a5fc15fe0aa93a856ab0d835882300f00984d1b ) went live on 19th August, we were still at low volume < 1000 errors a day, adding new wikis and fixing various gadgets as well as hot fixing production code, so it's hard to know exactly how many errors are not being unreported but I should note that deploy didn't drastically drop our numbers:

It's possible we are underreporting the number of errors, but that's okay. Once we have deployed to English Wikipedia, fixed more of our existing bugs, and are seeing a reasonable volume of errors with lots of wiggle room I am happy for us to explore modifying or removing the check, but right now this is keeping triaging manageable.

Here's an easy way to demonstrate the issue. 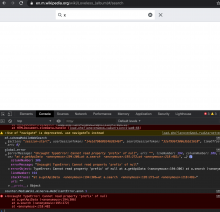 This is applicable to all regular production source code.

I think it would make sense to simply remove this check

I hope the above removes any remaining doubt.

Flooding logstash with errors that cannot be easily debugged due to anonymous stack traces and absent file uris would only give us inflated numbers and more noise to contend with, not alert us to new unknown errors. […]

Imho file urls aren't particularly relevant or useful when debugging JavaScript. The stacktrace is all you need imho, which we get either way. Once we have source maps working end-to-end, we can consider compressing variable names for a tiny perfwin, but until then our names are generally more than unique enough to figure things out.

Besides, on the URLs we do get today, it only tells you it was one of 100+ mostly unrelated modules.

I don't see how this could only inflate known errors. Afaik there is no meaningful correlation between loading code from cache and exposing an error. If anything, I imagine it's quite common for most code to first be loaded and not fully excercise all code paths on the first view in that feature's interaction. Pretty much all errors that happen after the first view or use of a feature, we are completely missing out on.

If I understand correctly, you are suggesting that the error load we plan for is limited to the ideal scenario where we don't have significant errors. That sounds dangerous to me. If it is true that we couldn't handle this error happening and while opening up Chrome, then we must not under any circumstances open up Chrome. Whether we fix the Graph bug must not factor into infrastructure capacity, especially infrastructure meant to handle unexpected errors.

Given we have enabled to major wikis already, I assume we have somewhere documented an answer to these two questions or questions similar to it:

Can you point to these and conclude whether we are currently over capacity? (if it weren't for the Chrome bug). Based on that we need to e.g. reduce wikis, introduce sampling, or apply other measures to limit the maximum amount of influx when unexpected errors happen. Or, if it turns out that the planned capacity already accounts for this and the current rate is orders of magnitudes below it (even with the Graph bug), then it's fine to go ahead.

This is not about eventgate capacity, this is about my own capacity :)

We're now in a good place to do this, now that we've removed the user generated content based Graph errors and have a good handle on all our existing bugs.

When allowing these into the pipeline, it's important we can debug them via other means than the file url and filter them if necessary so I've folded this into the pending schema changes.

So this is live now, but not really useful. It seems these additional errors are being anomyized and send as "Script error" without a stack trace so they are totally useless for debugging purposes.

So my hypothesise in T266517#6604763 is currently holding true:
We were underreporting errors at the trade-off of actionable errors.

You can filter these with file_url=undefined.

What was your goal here @Krinkle ? I ignore script errors in triaging, so this only impacts the overall error count. It would be useful to understand why code in Chrome loaded from localStorage is anonymized as "Script error" and fix that if possible, but we should resolve this ticket and probably create a new bug for that.

This has led to a huge spike in "Script error"

but only a tiny spike in other errors

I recommend we now either explicitly filter out these inactionable errors or restore the support for filtering out errors where file uri is undefined.

I should note the other errors are pretty useless to us. All of them have stack traces such as "at <anonymous>:1:60" so without the file uri there's little we can do about them.

Given we are over the threshold on https://grafana.wikimedia.org/d/000000566/overview?orgId=1

Change 670945 had a related patch set uploaded (by Jdlrobson; owner: Jdlrobson):
[mediawiki/extensions/WikimediaEvents@master] Do not log script errors without file uri

Change 670879 had a related patch set uploaded (by Jdlrobson; owner: Jdlrobson):
[mediawiki/extensions/WikimediaEvents@wmf/1.36.0-wmf.34] Do not log script errors without file uri

Change 670945 merged by jenkins-bot:
[mediawiki/extensions/WikimediaEvents@master] Do not log script errors without file uri

The problem statement given in the title is resolved, however I don't think it's resolved in the way that was originally intended. My guess is that code executed from localStorage is somehow being anonymized as "Script error." and we should do some further investigation in ResourceLoader to understand why and avoid it [1] .

Change 670879 merged by jenkins-bot:
[mediawiki/extensions/WikimediaEvents@wmf/1.36.0-wmf.34] Do not log script errors without file uri

So my hypothesise in T266517#6604763 is currently holding true:
We were underreporting errors at the trade-off of actionable errors.

Were you able to reproduce these scripts errors yourself by triggering an error from a cached script? Did we not already confirm weeks ago that errors from scripts executed after local storage cache have a useful message and trace? They only lack a file becuase they don't come from a networked URL.

I may be wrong here, but I don't think the problems introduced by the above commits have anything to do with the task at hand.

The hypothesis I think is obviously false as indicated by T266517#6604780. The current instrumentation is only logging errors triggered by users in the same page load as when those scripts were downloaded. Not only does that drastically reduce the probability of catching in general (since most script execution happens from a cache, thankfully), it also makes it impossible to catch erorrs from interactions that by design can only happen after a past page load that has downloaded the code in question.

Re-opening since it's not solved. (Feel free to re-prioritise.)

i'll setup a chat next week so we can get on the same page here and will create a new ticket with what we discuss. At this point this ticket is far too confusing to follow, in particular the title "Do log errors with no url or file_uri instead of dropped from client side error instrumentation". We are logging errors with no file uri.