Create a mapping table for the Libris Authorities database (new), i.e. which fields are there in the database, and how they correspond to Wikidata properties. What problems will there be in processing the data?

This will be necessary when we start importing data other than just the URI's (which is the first step).

The mappings will live here: https://www.wikidata.org/wiki/User:Alicia_Fagerving_(WMSE)/LibraryData/Libris_auth_mapping

Have you seen this mapping wikidata to bibframe

FYI: We have abt. 1700 Swedish authors connected from Litterturbanken on P5101

I also created a property for books from Litteraturbanken P5123 that is not filled....
My understanding is that information about Litteraturbanken books is available with metadata from LIBRIS see blogplost if you search using bibl:LITT ==> that we could in Wikidata create objects for the about 2895 books they have see statistics 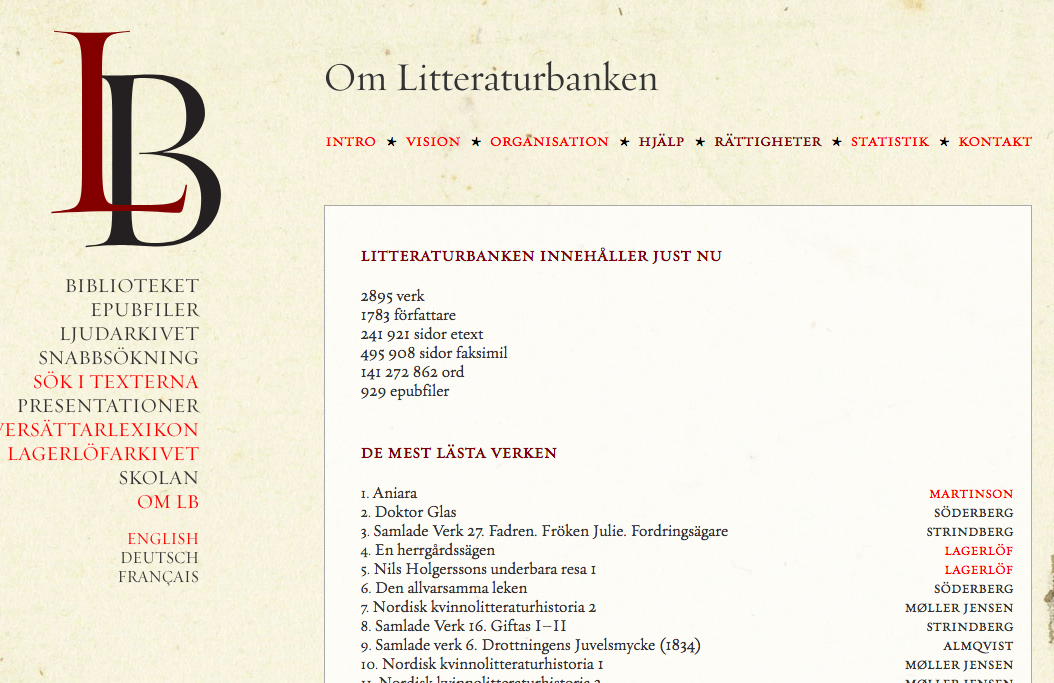 FYI: I also requested on friday to set up LIBRIS for doing Federated search see T202122: LIBRIS SPARQL in Wikidata

@Salgo60 This task is about the authority database, not works/Bibframe.

@Alicia_Fagerving_WMSE Yes I understand that but I feel a strategy and a vision for the whole concept of LIBRIS-XL and BIBFRAME and working together with Wikidata would be good to get in the future.... 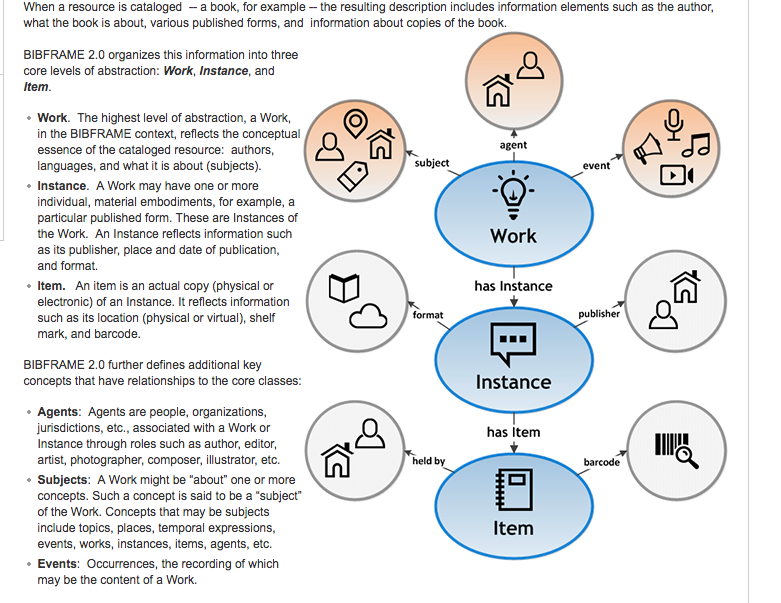 Question 1 will LIBRIS have the Qnumber of the Wikidata person so that we easy can do Federated searches and have exact match?
Question 2 Do you know if the SPARQL endpoint is http://libris.kb.se/sparql as I have suggested in T202122: LIBRIS SPARQL in Wikidata and Wikidata:SPARQL_federation_input#LIBRIS

@Salgo60 : A vision is certainly being developed :) Yes, an authority post would correspond to the Agent. Back-linking from Libris is a possibility, considering they already store some viaf/isni ID's. The Sparql endpoint, as you can see, uses the old SELIBR ID's, so it's not helpful at this point in the project (we're focusing on the new URI's), and I don't know if/when there will be a usable endpoint for the new Libris.

@Alicia_Fagerving_WMSE
Thanks for the answer and now more questions ;-)

Question A) do you have the new SPARQL endpoint so we can set that one up also? I tried ask LIBRIS people but got no answer link

FYI: I did a small test with a tool HUB ==> when we get the LibrisURI in Wikidata people could use Wikidata to find the new record.

My understanding from speaking short with Peter Kranz the former CIO at KB was that they had an usercase where they should store WD: Qnumber in LIBRIS XL but I havnt heard anything more...

When I check Strindberg tr574vdc33gk2cc (json) it looks like they store sv:Wikipedia URL in LIBRIS XL as Se även

feels wrong not using Wikidata and set it as same as or have its as its own Property..... 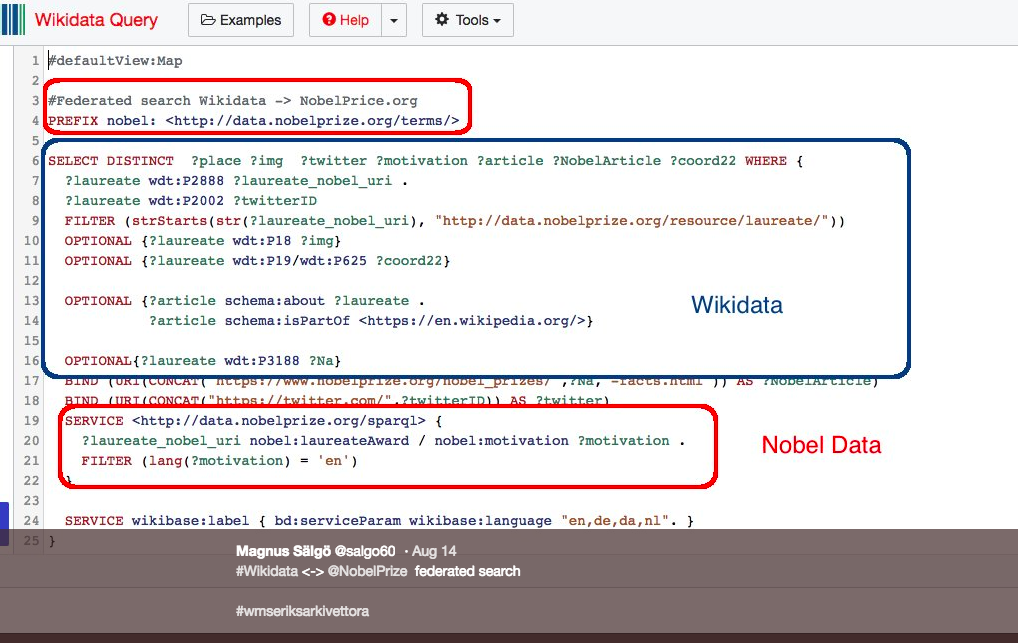 Property 2888 was used see Albert Camus Q34670#Property 2888 same as http://data.nobelprize.org/resource/laureate/628 next step will be to have a specific Nobel-URI in Wikidata....

Just a very quick note (I'll have a more thorough look at your questions later): unfortunately there are very very few auth posts in Libris that link directly to Wikipedia. Dbpedia links are a bit more common. It doesn't look like either were inserted in a systematic way.

My feeling is that LIBRIS has a backlog of needs to be done things which I guess is no surprise with an old system,.... and now moving directing Linked Data then you need to start communicate and have a change process (like using Phabricator) in a total new way that I feel LIBRIS is not prepared to be doing....

I have also pointed out for the LIBRIS people they need something more than a discussion group to track changes and what is released see kundo.se/org/librisxl några reflexioner samt en fråga

have you any thoughts of quality of dates from LIBRIS? my feeling is that all dates at LIBRIS are unsourced..... or?

@Salgo60: It's very rare that Libris cites any sources, and when they do it's only with fields like profession and maybe description… I haven't seen any sources for the dates.

We haven't examined how accurate their dates are. I don't remember any bad experiences, but then of course it's not something you double-check when just reading catalog posts. We could think about examining a random sample, but it would have to be worth the time. Do you have any examples of bad data quality?

On the plus side, the vast majority of dates in Libris are YYYY, so there's less place for error than with day dates.

As for multiple dates, we're working on T202400 and intend to implement it before the upload.

I would say the other way around always trust SBL P3217 we have found some web errors but the feedback from people skilled in researching history says always trust SBL.... see my review of SBL

Another good pattern I have seen is to add Property:P4390 mapping relation type ==> you can describe the concept with

I guess pointing at a person is always exact match but if we start to link to concepts then maybe we need to qualify it....