Tags
Subscribers
Amire80, Nikerabbit, santhosh and 4 others
Assigned To
None
Authored By
Jdlrobson, Dec 14 2018

It's important to have consistency across mobile and desktop in certain ways to help bridge the gap between interfaces.

Many users have commented that the ability to change language is impossible in mobile. This is likely because the icon in mobile is currently not accompanied by text and given space is a constraint in mobile design, difficult to fix.

To unify these UI's we can add an icon to the languages heading in Vector like so:

This should strengthen the language icon's meaning for users in desktop and help people navigate between languages better on mobile.

Change 479718 had a related patch set uploaded (by Jdlrobson; owner: Jdlrobson):
[mediawiki/skins/Vector@master] A language icon shows next to languages header

I would be very careful with introducing such. We're all clear that the current link garden could see improvements.
But this doesn't seem to improve user-experience to me for several reasons:

As a matter of fact, the icon already appears on desktop.

This is not what most people see in Wikipedia articles:

This is what most people see in Wikipedia articles: 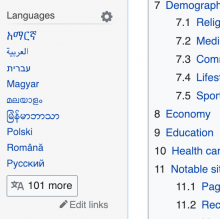 By default, the Compact Language Links feature is enabled to anonymous users, so if there are more then 9 languages in the sidebar, the "More" button is shown, and it includes Wikimedia's "文A" language icon. (Caveat: The Compact Language Links feature doesn't work on the main page in several projects, including the English Wikipedia. It's a complex issue tracked at T179140. But everywhere else the list is compact.)

This icon is not shown if there are less than 9 languages, and when it is shown, it is shown at the bottom of the list and not at the top as the initial task description suggests. So yeah, it's not perfectly consistent as it should be.

For esthetics and consistency it may be a good idea to always show the icon and perhaps the "More" button, even when the languages list is small. However, I am skeptical about the effectiveness of this measure in strengthening the language icon's meaning for desktop users. Maybe it will work and maybe it won't. See also my long comment at T210865#4837020 about the generally problematic concept of "language icon".

To sum up, while I'm not squarely opposed to the suggestion in this task, I don't think that it will actually be a big step towards making languages more accessible on either desktop or mobile environments. A more comprehensive solution is needed, and it has to involve proper goal setting and design research. Some food for thought about this can be seen at https://www.mediawiki.org/wiki/Interlanguage_links/Implementation_comparison.

Change 479718 abandoned by Jdlrobson:
A language icon shows next to languages header

As @Amire80 points out the icon is already used in some places. With the roll out of Desktop Improvements this should get better. AS task creator - resolving :)