A way to fix this would be to separate the single quotation marks more, so that it would be clear that they're meant to make the text italic.

EDIT: I've also uploaded a file for a reference (this is from a Meta-wiki page named "User groups", the original English message is in italic, but that's not obvious for someone using the Translate extension):

Interesting problem, thanks for reporting this! The font-family here (Firefox 64, Linux, on meta) is just defined as generic sans-serif coming from body: 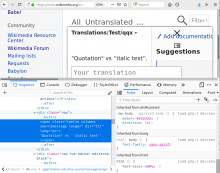 Wondering if there are better fonts that allow differentiation that could be applied to a more specific area than body.

I'm using Chrome on Windows, and the inspector shows me the same - font-family is sans-serif, coming from body (the sans-serif coming from html is stroke out for some reason - idk if this matters, I'm not a coder)