Note: the associated epic T214647 should be read first before taking on this task!

The Drawer hide event removes a few CSS classes from the Drawer’s DOM element, but it never removes the Drawer’s actual HTML, and it also doesn’t remove the CSS classes on the HTML element.

The reference drawer element should no longer exist in the DOM

The reference is still in the DOM, just below the <body/> closing tag, but hidden. 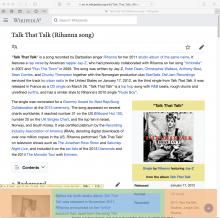 This leads to bugs like T211691 where the .has-drawer class on the HTML element clashes with other classes.

However, One Does Not Simply remove a class from the HTML element. The Drawer features a fade-in and fade-out animation, and to preserve this animation, the element must be removed after the animation finishes. This means adding a timer to the hide method (which means we should also guard against multiple calls to that timer). A timer is also prone to breakage if the CSS animation duration changes. It should be determined if we can somehow keep the CSS animation duration and the duration of the timer in sync (maybe with window.getComputedStyle)?

Bonus round
The Drawer is animated with a .drawer-visible class on the HTML element. This can probably be replaced with a CSS animation on the drawer itself, which will be executed when the Drawer is appended to the DOM. A CSS class would still be required to reverse the animation before the element is detached from the DOM., but at least this effect would be contained entirely in a keyframe animation, instead of in opacity, display and transition css rules.

The reference drawer element should no longer exist in the DOM

I'm not 100% sure about this.
I think the expectation right now is that only one Drawer can be displayed at any given time.

This leads to bugs like T211691 where the .has-drawer class on the HTML element clashes with other classes.

I don't think that being in the DOM is the problem here, but that when hidden it doesn't cleanup after itself.

Will chew on this one a little more. Clearly the status quo is not good enough, but I'm not sure switching out add/remove classes gives us anything, as we add the classes to support animations and to apply opacity to other elements.

Change 553163 had a related patch set uploaded (by Jdlrobson; owner: Jdlrobson):
[mediawiki/skins/MinervaNeue@master] Remove references from the DOM on close and manage body classes

Pulling into sprint as this cleaned up the solution to T225213 by fixing the Reference Drawer (when merged: adjust acceptance criteria by ticking resolved boxes, move out of sprint, remove "patch for review")

@nray this looks done to me? Is there anything remaining or can this go into QA?

@Jdlrobson I think there is one more remaining patch at https://gerrit.wikimedia.org/r/#/c/mediawiki/skins/MinervaNeue/+/553163/

Change 553163 merged by jenkins-bot:
[mediawiki/skins/MinervaNeue@master] Remove references from the DOM on close and manage body classes

This is fixed for red link drawer but not the other drawers..