We want to measure the impact in terms of readers' engagement of adding the new Data Center in Singapore.
Readers get significant latency improvements, but does this impact their engagement with Wikipedia? Do they tend to read more pages? Does the number of unique devices significantly increase? Is it more likely that they register as new users?

One possible idea is to build, for different time snapshots, a regression model that can tell whether there is a relation between countries Wikipedia usage and data center re-routing.

We will describe each country with the following independent variables:

The target/dependent variable will be:

We will plot the significance of each feature over different time snapshots. If engagement-related variables becomes predictive of the target variable after re-routing time, it means that there is a significant relation between the switch to the data center and readers' engagement.

To do this, we will need:

This looks awesome @Miriam -- just adding more particulars to what I mentioned today:

Hey @Miriam , happy to help if you want to try the Bayesian approach :)

Also @MNeisler and @Tbayer has done an analysis about the impact of Singapore Data Center's switch last year: T184677 . I'm not sure if you're addressing the same questions here, but if you want to learn more about the previous analysis, feel free to reach out to @MNeisler .

Thanks @chelsyx ! Yes the questions are somehow similar -- how performance impacts engagement -- and we want perform a robust analysis 1 year after switching to the Singapore data center.

@Miriam - sorry for the slowness!

I've also left out the Oceania conversions (Australia, NZ, and various surrounding islands). Those converted, reverted, and experimented on multiple times circa April - July, and some of those countries are still mapped there, but the latency benefit for Oceania is known to be questionable - some localities actually get worse latency to eqsin than ulsfo, and many of the rest are very borderline benefits. Probably best left out of any broad analysis of the rest of AP.

[edited to remove NC from the 2nd timestamp, as that's off in Oceania as well]

@BBlack Thank you, I'll get back to you with more insights soon!

Hello! Sorry for the slow response, travels in the middle.

So I did some initial analysis of 2.5 years of traffic data, starting from January 2017.

TL;DR lift in engagement in switched countries is substantial, but seem to be very much related with growth of internet user base, however early results show that the switch might play an important role in this engagement lift.
Disclaimer: the data is fairly small, so further investigation is needed to validate the latest findings.

Results for Overall Metrics before and after switching time (generally set as April 2018), comparison between treatment and control groups 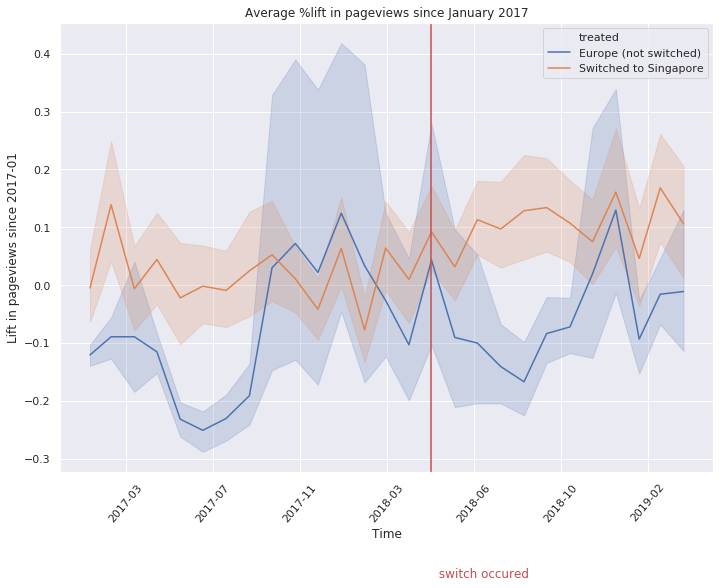 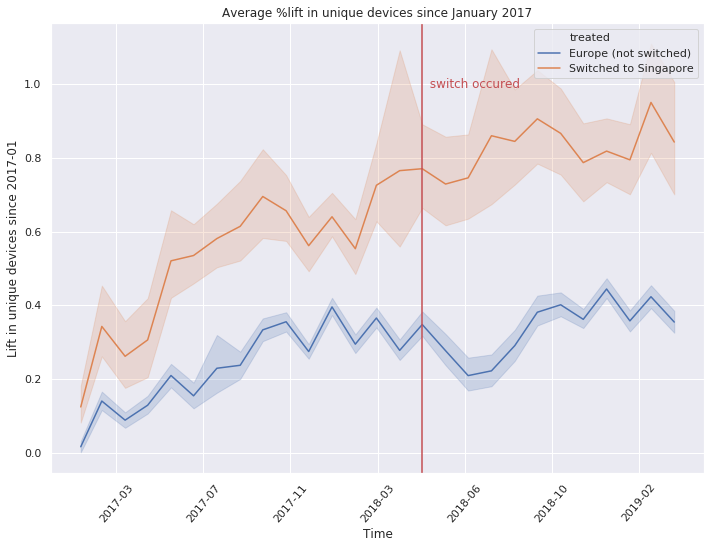 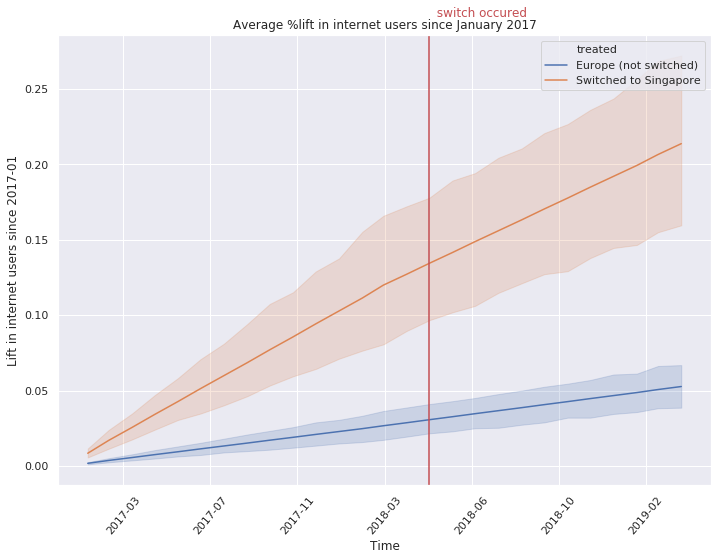 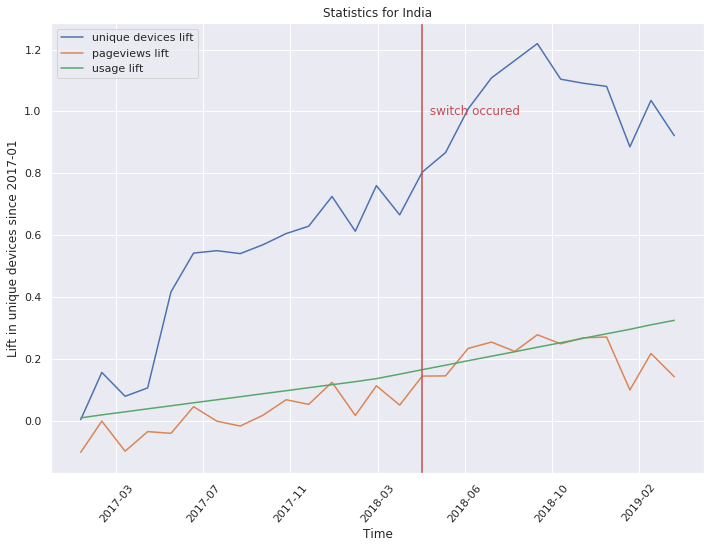 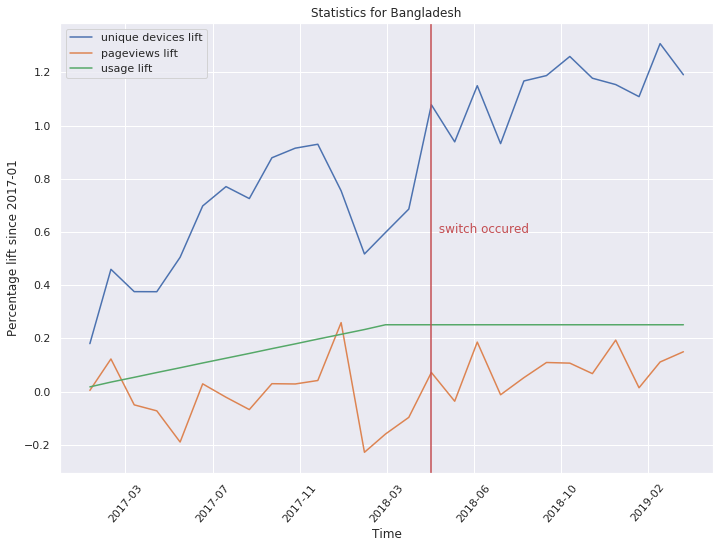 From the plot below, we can see that both variables are important to predict lift in unique devices, and therefore that the switch plays an important role in the lift of unique devices. 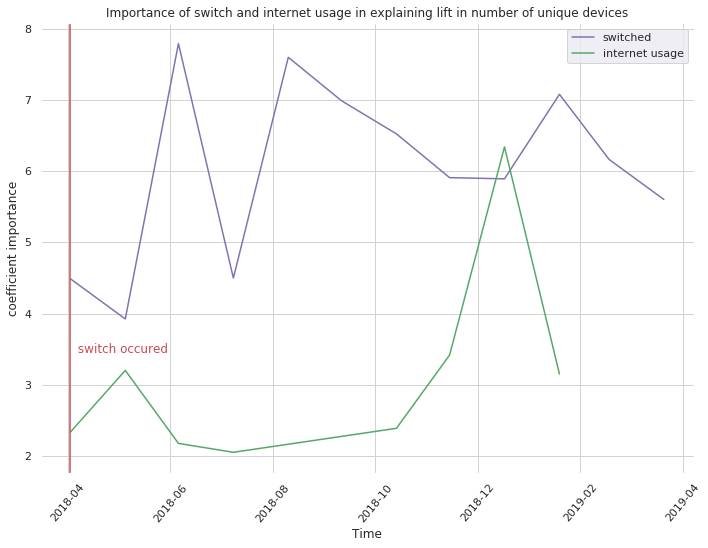 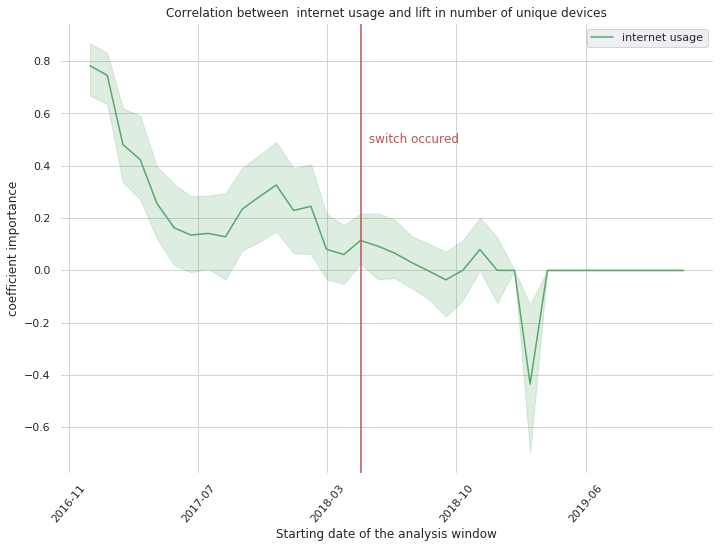 @BBlack does the above help? Happy to steer the analysis in other directions if needed.

@chelsyx maybe we can look at the time series analysis if you have time?

@Miriam Thanks for doing this analysis. Based on what we discussed on Thursday, it would be great if you can look at some of the South American countries with internet growths similar to Asia and see if the patterns you see (for unique device growth) can be similarly explained. If the patterns are different, we have a conclusion to make here with some modest signals.

Also, one more suggestion, this data (just like all the data we have related to pageviews, is affected by bots). You might want to look at unique_devices (underestimate) rather than the total, this number is less affected by bots, as only bots that might accept cookies are counted in this measure, and it also speaks as to the number of "returning sessions" to the site (i.e. people that were looking at wikipedia on tuesday that also come to browse on a thursday).

More info on this here: https://wikitech.wikimedia.org/wiki/Analytics/Data_Lake/Traffic/Unique_Devices/Last_access_solution#How_we_are_counting:_Technical_explanation

HI @leila, according to what we discussed, some further analysis below. 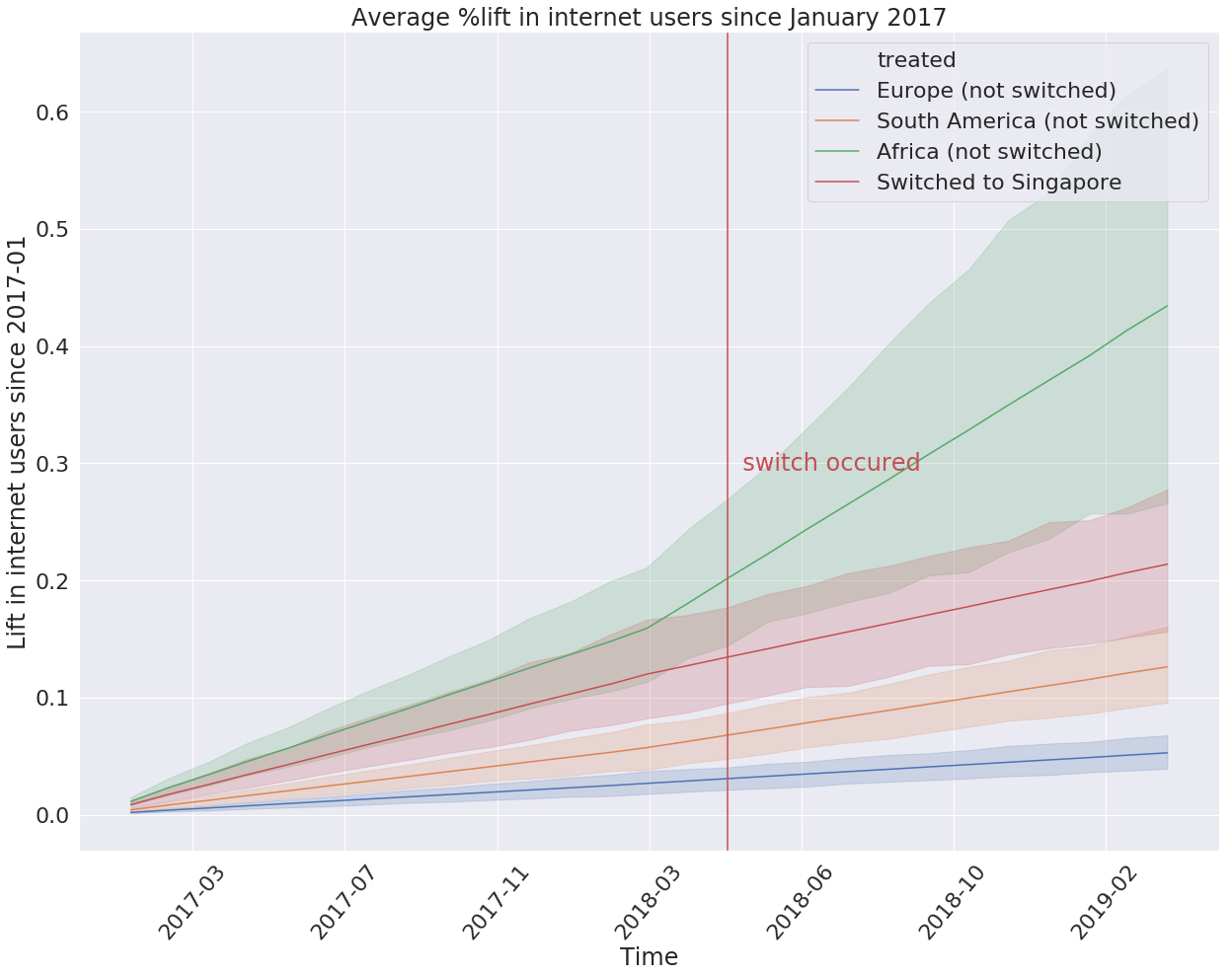 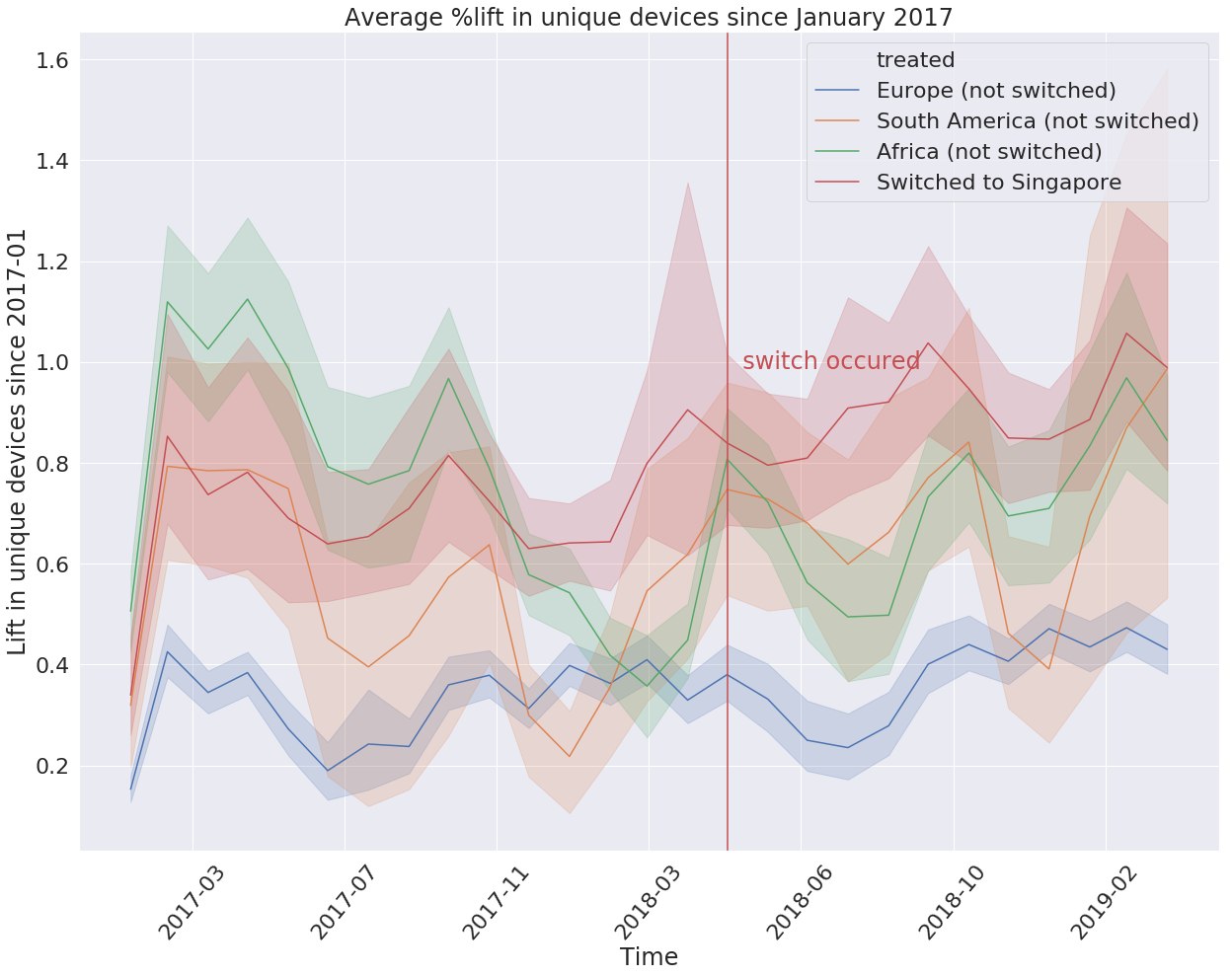 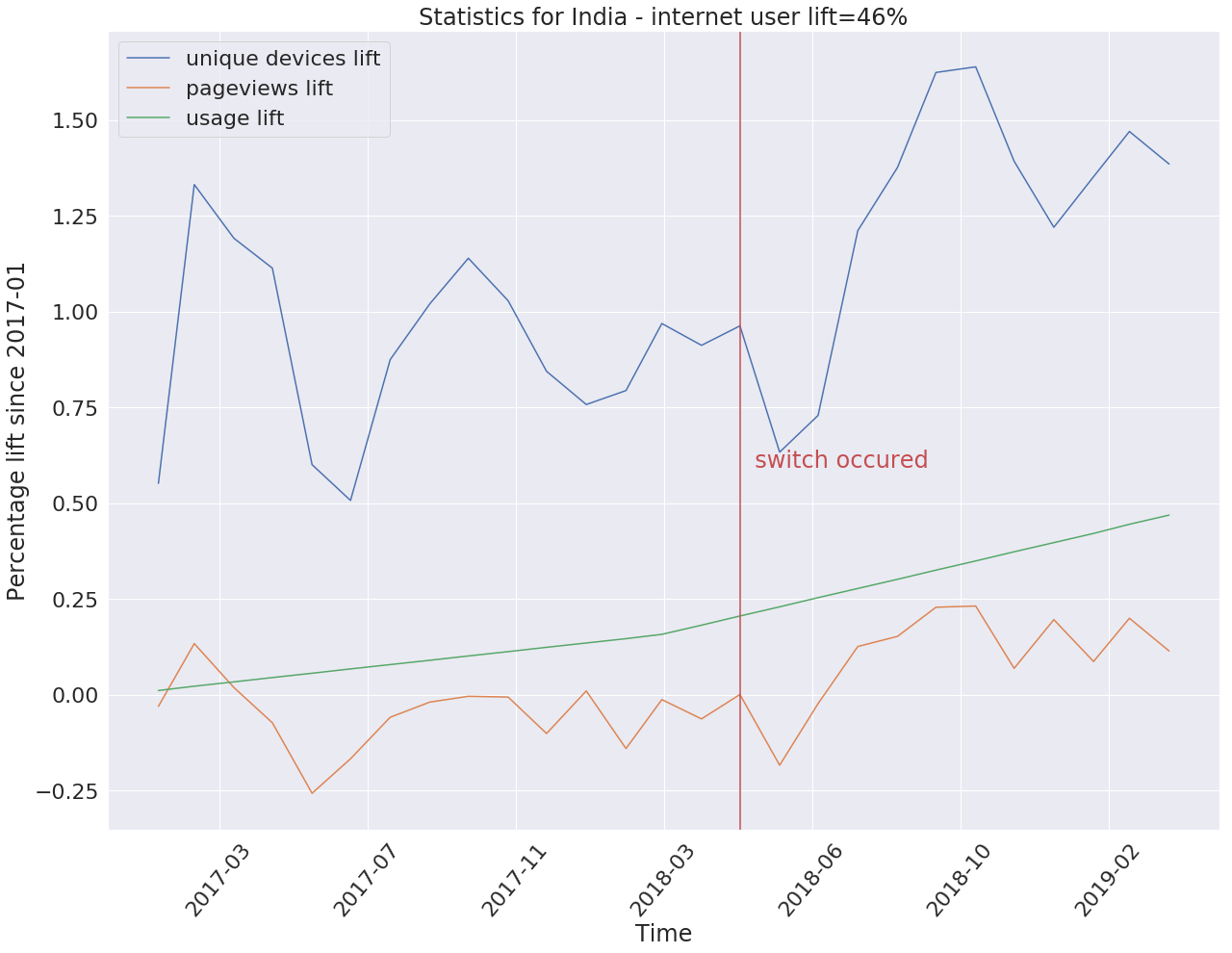 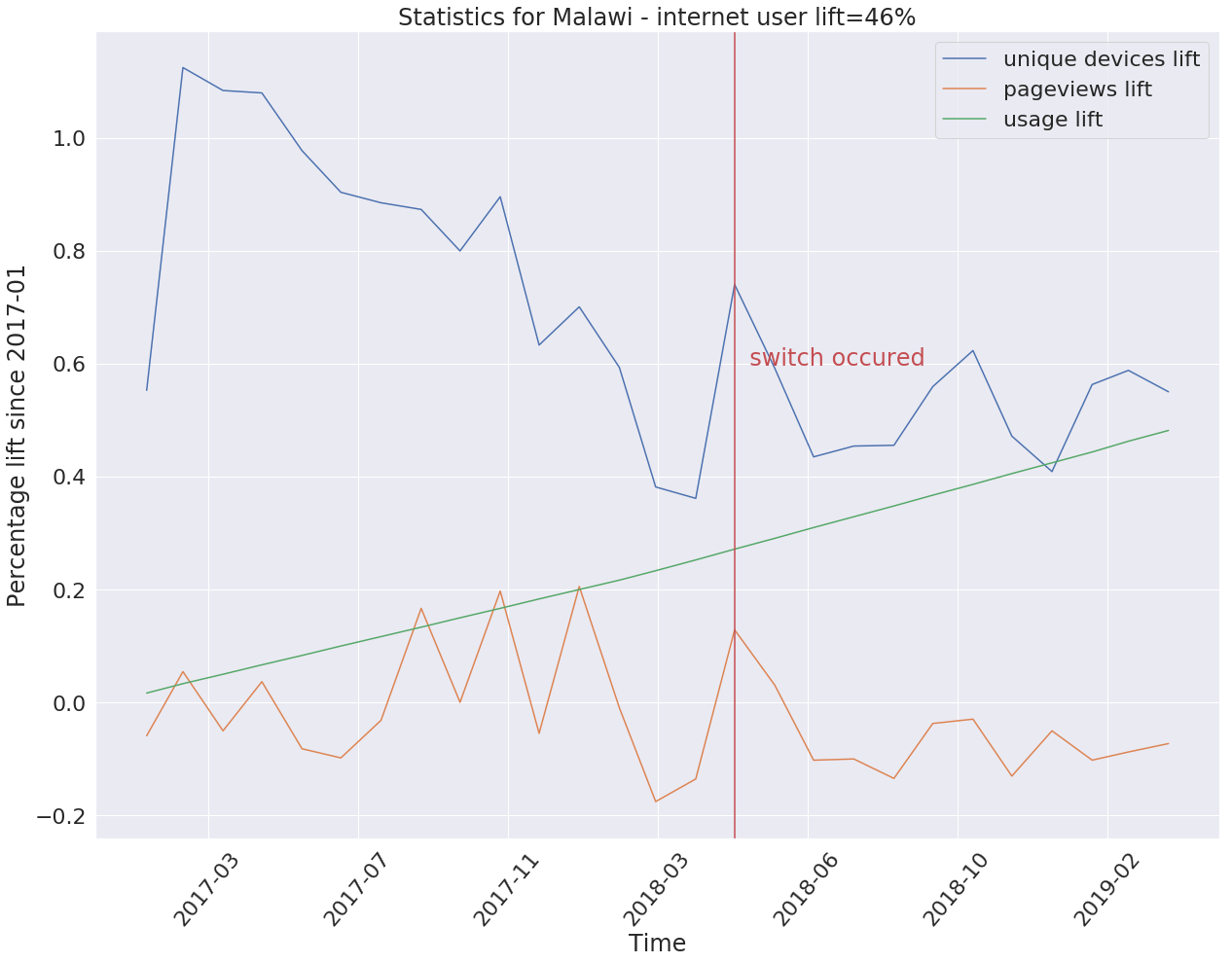 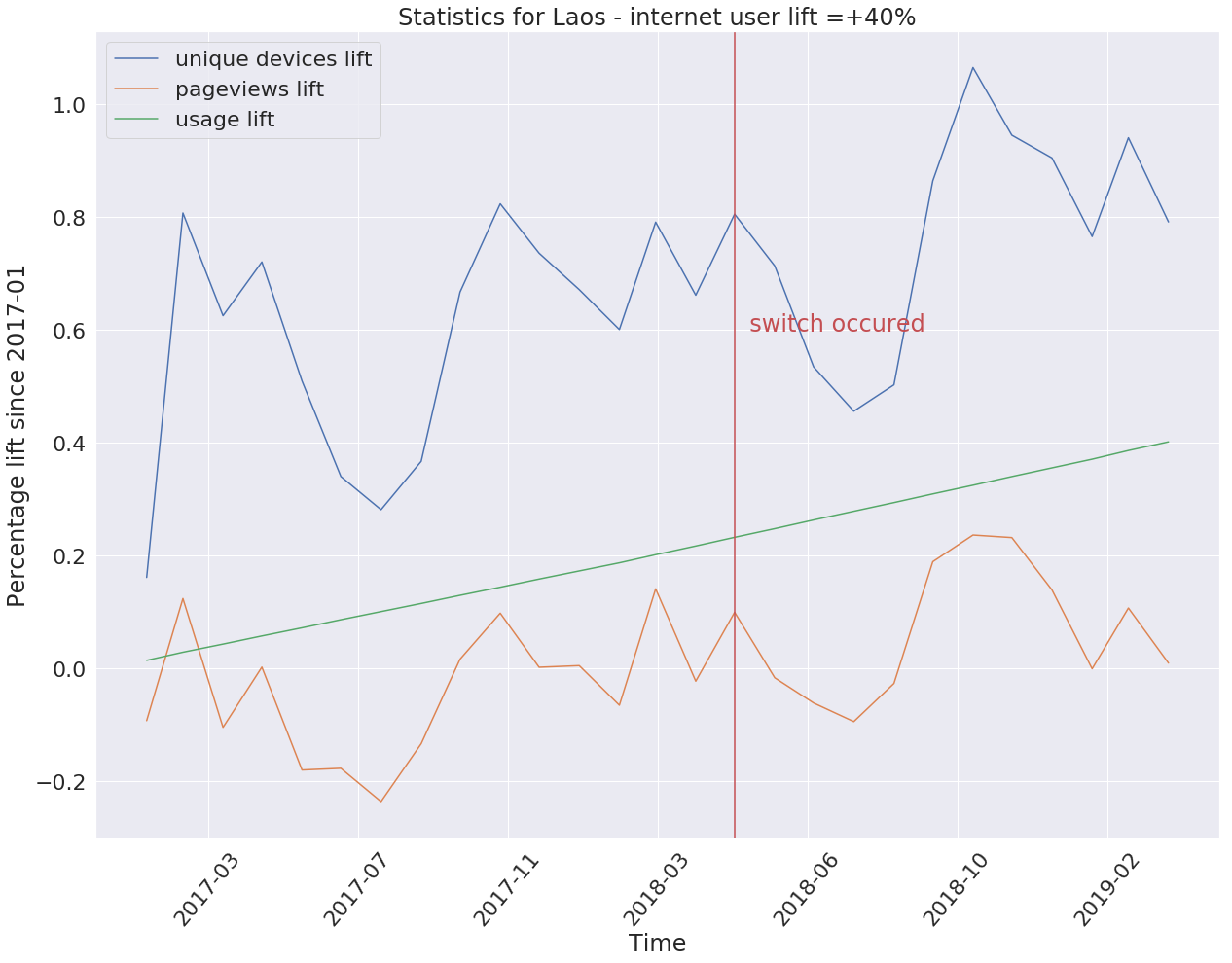 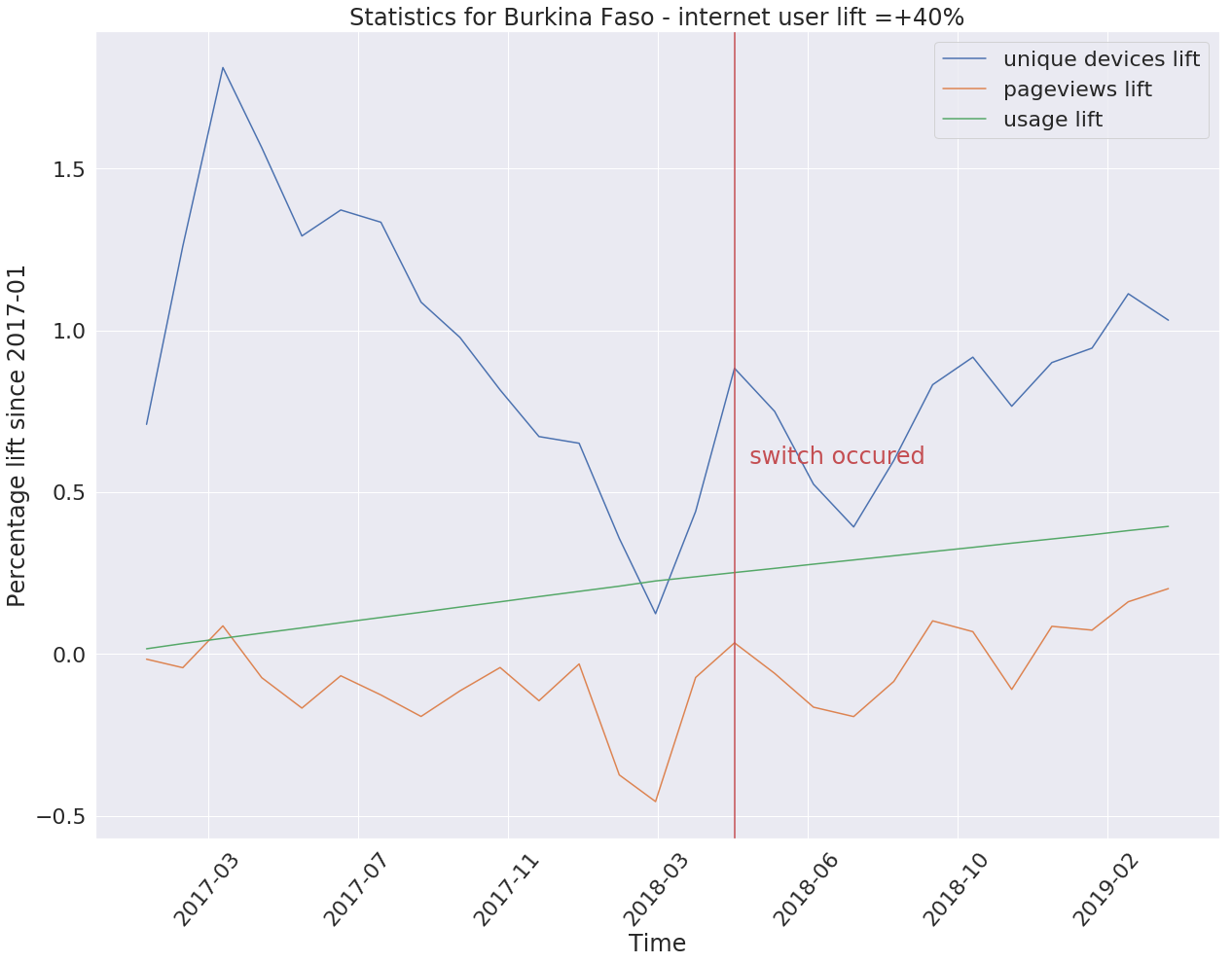 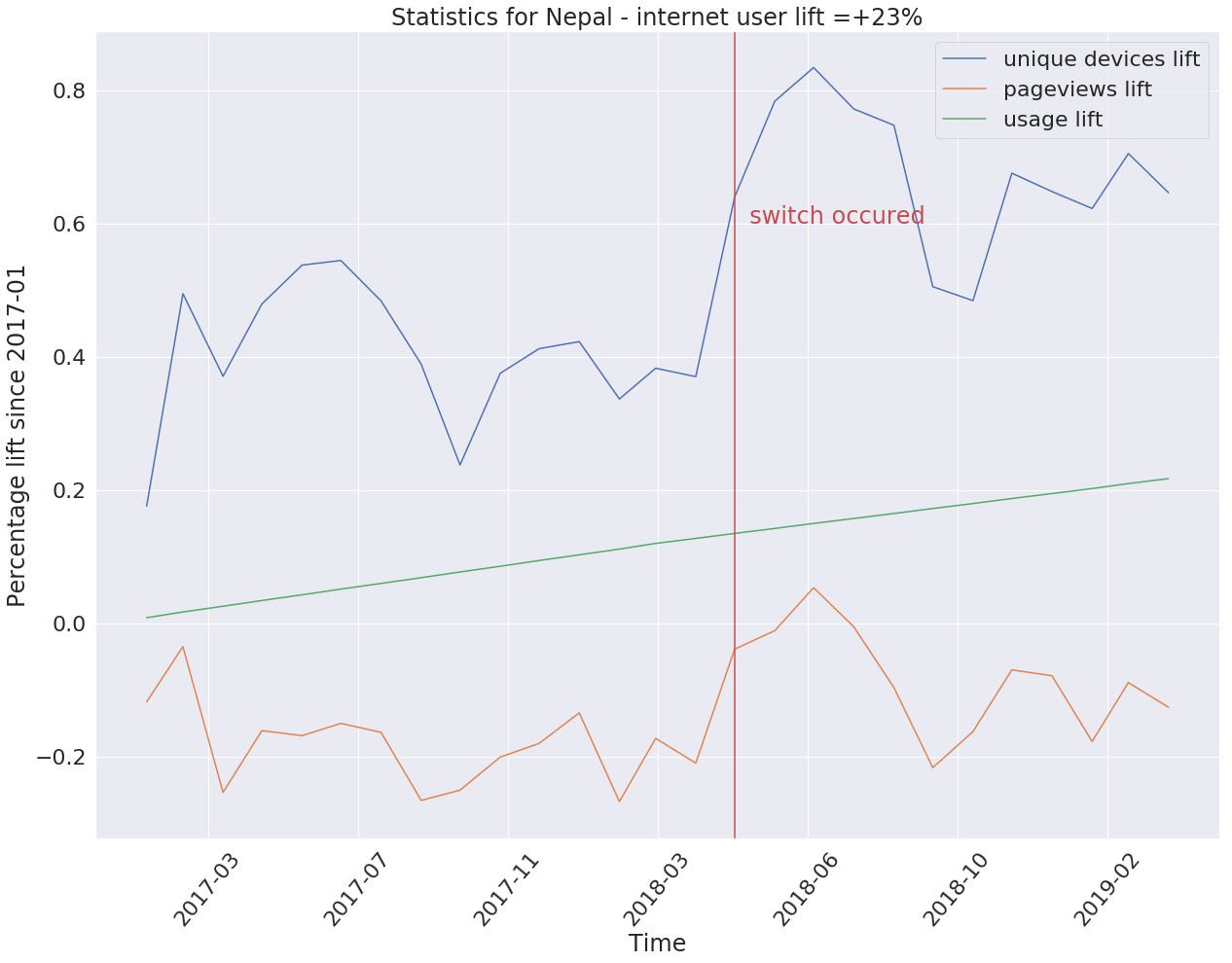 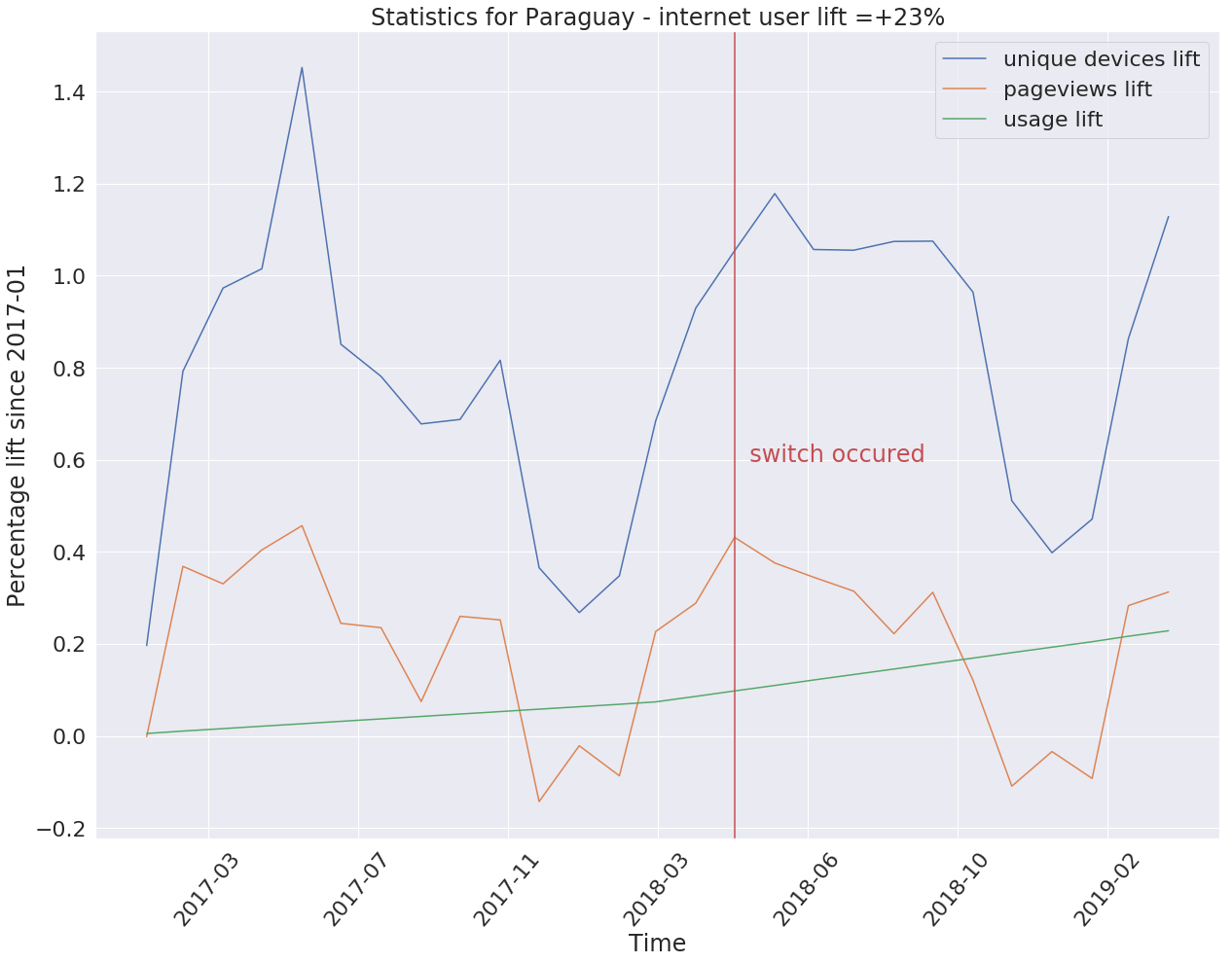 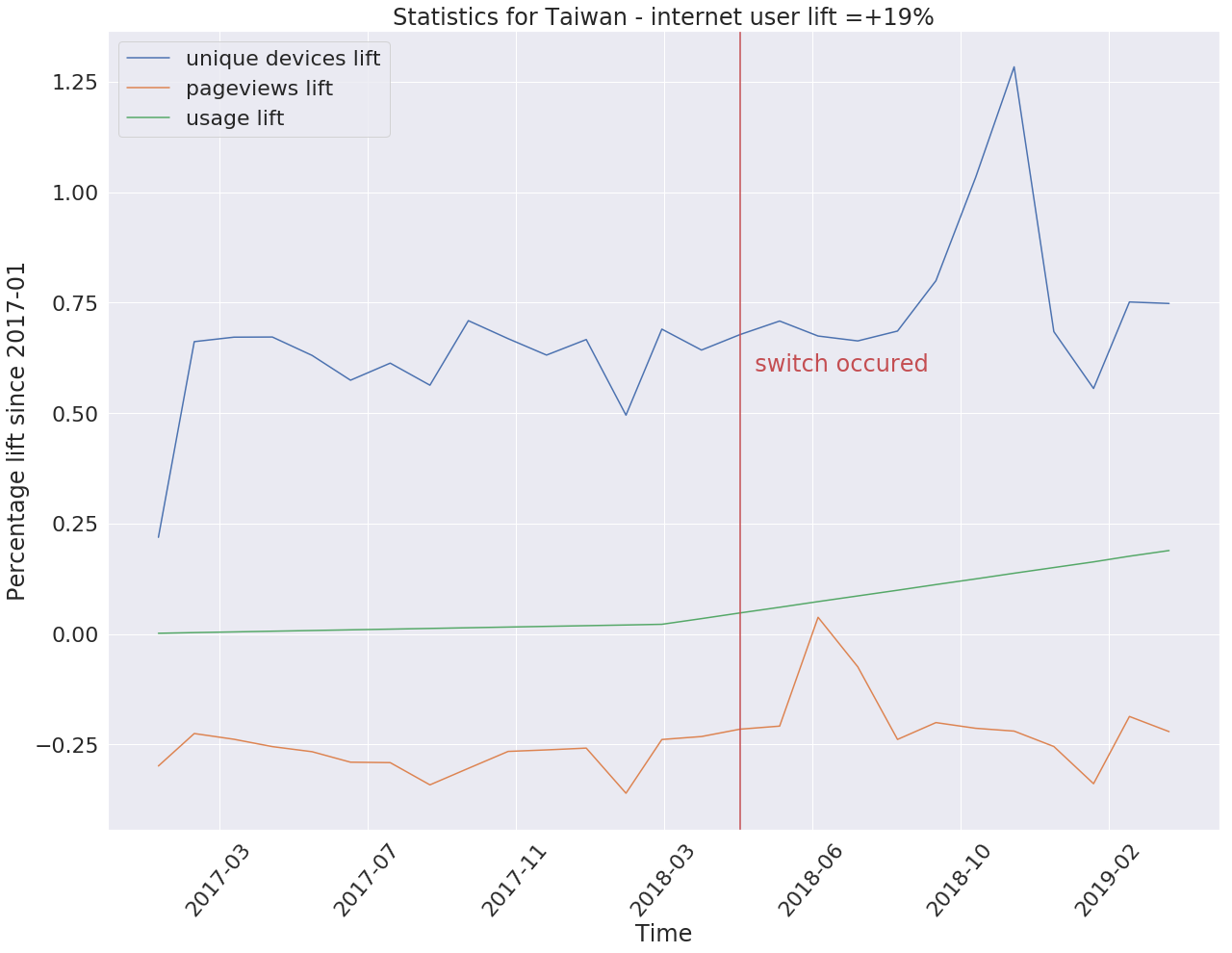 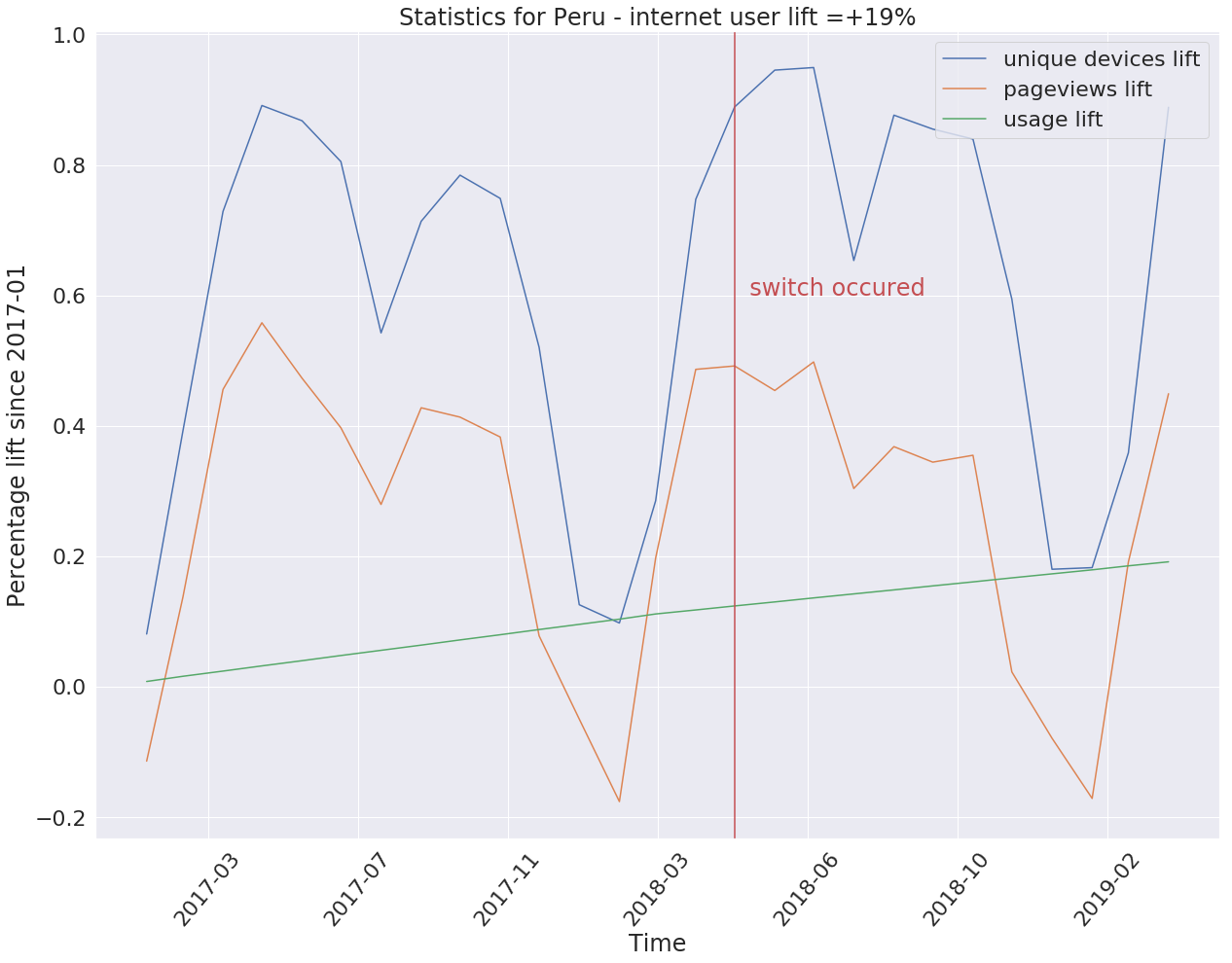 Other than looking at seasonality I cannot think of any further suggestions.

@Miriam, thanks for expanding the analysis in T222078#5216328 . You and I talked about the results you have in this task and what recommendations we can have based on what we have learned from this analysis. I'll summarize them below:

@BBlack I'm going to move this task to Done on our end and will Resolve it in a couple of weeks. If it's resolved on your end, feel free to close it earlier. If you have pending questions, let us know by 2019-06-15.

@leila and @Miriam - Thanks for all the hard work here, it's truly outstanding the depth to which this analysis already goes, and it puts some useful numbers on the impact of expanding our edge network into under-served regions.