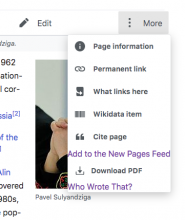 Here is the code that creates the link:

@Jdlrobson - Now that T231925 is fixed, what code should PageTriage be using to create the link? I was thinking that it would get fixed automatically by T231925, but it still looks broken as in the description screenshot.

@kaldari "who wrote that" is working for me and when I run the code in Pagetriage it also works.

I suspect there is a race condition here - either in the client side hook system or PageTriage not considering the loading of skins.minerva.scripts
mw.hook( 'util.addPortletLink' ).add( require( './addPortletLink.js' ) );

This extension is not maintained by reading web so moving to tracking.

I just ran into the same thing, also with a gadget/personal script of mine:

It doesn't happen consistently though. This is a race condition. Refreshing usually means a different one ends up unstyled. The PageTriage tool is unstyled most of the time, probably due to having less code behind it before calling (more prone to hit the race condition). Although every one in a while, it does get styled correctly.

This happens because we're using mw.hook() incorrectly. I should have realised this as part of T231925...

The mw.hook() interface is used for things like wikipage.content, wikipage.categories, and more. What they have in common is that they are considered better than a $() dom-ready callback because we can fire out hook a second time if they have been replaced. For example, during a live preview, or after publishing an edit with VisualEditor, after lazily loading a piece of content, or adding a gallery in VE.

This means the hook name is meant to refer to a single conceptual thing, not several of the same kind of thing.

In short: Only the last item added is seen by the Minera skin JS code when it registers its handler. This is required by the mw.hook contract and cannot be changed (doing so would break all its intended use cases, and also cause a memory leak).

Please reopen this ticket if it doesn't seem to be working.