Description:
Some people are reporting that kerning of Nimbus Sans L could be improved.

I did some testing myself in Firefox and Chrome, and I am not really seeing a major issue to be honest. (See attached screenshots).

Decided to upload screenshots to Commons instead. They're at...

Remember that, if you were getting DejaVu Sans before, this is going to look smaller in some respects. We talked about this in bug 63686 as well. DejaVu is a humanist san-serif with much wider appearance to the eye, but vertical x-height is more uniform in a Helvetica-like sans such as Nimbus. This gives us more consistent appearance and readability for large text blocks, which is why it was chosen. 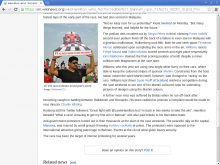 The additional screenshot I attached is from Chrome on Linux, looking at the same caption Brian reported on. I do not see the same kerning problem he did. Is this potentially browser-specific?

As I said in a follow up email, the issue is more pronounced in Firefox. Do you not see it in Firefox?

I measured both the fake kerning space and the real space. They were both exactly 3 pixels

I assume you downloaded Arial as part of a Windows font package? (Not sure what distro of Linux you are on, but this is somewhat common among Ubuntu users it seems.)

I have it. Possibly from wine. Or some other package i installed over the years. Distro is debian

We won't be overwriting the kerning to the font, as that would likely cause more issues than it resolves.