That makes sense to me, let's go with #2

@bmartinezcalvo will add a link to the Figma spec sheet for the MVP once she has refined it.

@zeljkofilipin and I spoke about this on June 1st, and we agreed that we would create a proof of concept for Cypress component testing in Codex

The above would also address T310399: [Select] Entering a long default label extends the component's maxLength, which happens because we don't set a max-length on Select at all currently.

This happens because we have min-width: 280px on the dropdown, to prevent it from being too narrow. This causes it to grow outside of its box if the box is narrower than 280px.

Catrope added a comment to T309722: Remove logic to display button on hover from TypeaheadSearch component.

Hey @Catrope. Great catch! I think your approach makes total sense. At the same time, it looks like the Vector 2022 TahS doesn't have any transitions applied to it, so we should make sure we get design approval on this: should we ping Alex Hollender to take a look at the Vector patch?

You're right, I missed the fact that the transition was disabled completely, because of what Anne explains in her comment.

Here's an example of a use case for ButtonGroup in GrowthExperiments. Note the groups of three buttons (1, 3, 7 and 1, 2, 6) under "Recent days" and "Recent months". 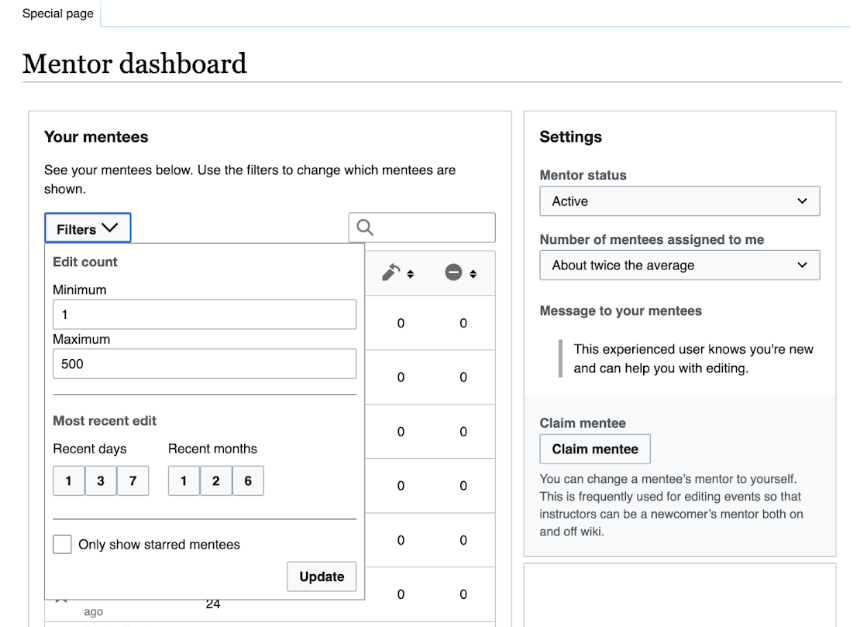 Fri, Jun 10, 4:12 AM · Epic, Codex, Design-Systems-Team
Catrope added a comment to T309825: Button text overflows the button's borders and does not have the correct padding.

I think that might be because the font Firefox uses is slightly larger/wider? I feel like we see subtle differences like that with Firefox pretty often. @Volker_E probably knows more.

Minor adjustment: I don't have Volker-vision, but I think the bottom-end border radius for the button will need to be set to 0 in this case

This seems to already be working on the test wiki for the current Vector patch:

One thing that I think we should clarify for ButtonGroup is what its function is. It could be:

We decided not to do this, and instead to migrate Vector from Vue 2 to Vue 3 and from WVUI to Codex in the same commit.

Catrope added a comment to T309722: Remove logic to display button on hover from TypeaheadSearch component.

Can you name a specific browser that we support but that doesn't support RGBA hex notation? I ask because the way to stop the CSS minifier from outputting unsupported things looks like this:

Catrope added a comment to T308170: MenuItems should lose highlighted and active states on mouseleave.

This happens in all cases where there's only one item in a menu. Here's the same issue in the Lookup demo:

Why is this a blocker for T297025? I don't see how this bug affects TypeaheadSearch, because it requires opening the menu while an item is already selected, which is not possible in TypeaheadSearch (because selecting an item also navigates away to a different page).

Fri, Jun 3, 10:58 PM · Design-Systems-Team (Design-Systems-Sprint), Codex
Catrope added a comment to T307030: Menu should be able to extend past the edge of its container.

I could not reproduce what Bárbara reported in Chrome, but I could in Firefox. @bmartinezcalvo were you testing in Firefox? Or in Safari?