Context
Recent observations suggest that the map from the language list in the ULS is not being used. It was removed as part of T64637.
Since the map is no longer present, the designs can be adjusted to make the selector more compact.

Tracked in GitHub as issue #128

Important: This card tracks the work to be done in iterations for ULS redesigns related to the language selector. This is the main card to be used for the design reference. Please don't close this without checking with the Language Engineering team.

Narrative
As a user, I can select languages without the map getting in the way, so that the main entry points (search and common languages) become more prominent.

Some mockups reflecting the final result under different conditions. 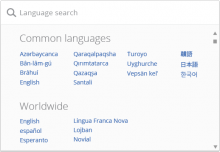 When the list is attached to an element (e.g., connected to the cog icon, or a button) a triangle points to the element: 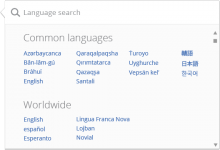 When the list is used as part of the ULS settings (note the option to go back, and the change in the search placeholder): 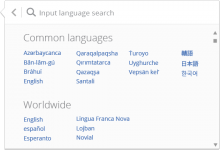 Deliverables
https://github.com/wikimedia/jquery.uls/pull/152 - Removes the map and reorganizes the code

Duplicates Merged Here
T85205: Text for input language selector wraps even though there would be space for the text

The graphical assets needed for the back arrow (SVG/PNG and LTR/RTL):

I am working on this as low priority.

I am submitting some small clean-ups to GitHub now, but no need to wait for that.