Currently suggestions saved for later appear in a separate section above the suggestions list. In order to avoid to create an additional section for personal collections (custom lists or campaigns the users join), we want to present "for later" as one of those custom collections: 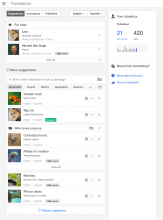 This i just one step to align with the future of personalised lists and campaigns. This prototype and the mockup below provide more details on the further direction: