Suggest a campaign for users to join
Open, MediumPublic
Actions

The suggestions list can include, in addition to individual items, suggested campaigns for users to join them. For example, a user can discover through their suggestions that a "Wiki loves science" campaign exist, and add this list to their collections.

A prototype supporting some of the ideas below is available: 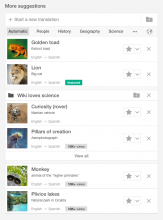 Mentioned In
T128174: Integrate "for later" as a personal translation list
T115006: Surface some manually curated campaigns for users to translate

I added some details, graphical assets and a link to a prototype.