See also https://meta.wikimedia.org/wiki/Grants:Project/Glrx/SVG_i18n when investigating. Could this help us achieve the goal?

Moving to backlog as Community Tech has several other projects in process at the moment.

Here's a screenshot of what the SVG Translate Tool Forge tool is supposed to look like (it's mostly broken currently):

What's the status of the existing SVG-Translate extension?

No development since 2015 though like everything in Gerrit it has received some drive-by maintenance related to making CI pass and fixing usages of deprecated core functionality. The extension requires a set of patches to Translate currently existing in a separate branch, that would require a manual merge into master.

How does the code look? What issues might we run into if we build off of that?

The code looks OK for standards of its time, it would require some modernization. My main concern is its dependency on Translate which has actively evolved since then. We would need to consult the Language team before deciding to take this road:

If we build another extension from scratch, can we reuse any of the code?

Yes, the SVG manipulation code can be extracted, though I don't know why we would want to create another extension here.

Seems like there are a few bugs, but the code in general is not completely dead. Without access to server logs, I can only tell that JS is broken because it's generated dynamically and there's a PHP notice in the middle of it; and that OAuth appears to be broken because it uses a shared version of Peachy and the code base hasn't been updated for its new version.

It looks like it's been not been updated in a long time. Does it seem like we can salvage any of it?

Yes, the most important part - SVG manipulation - is still there.

What are the pros and cons of using the toolforge tool versus the extension?

The extension is much better integrated with MediaWiki

What are rough estimations on time it might take to build either?

Regarding the tool the question is what do we want to "build"? If it's just firefighting without any modernization and improvements, one sprint might be enough.

As of the extension, any new extension is a complex matter, especially this one where actual development work is needed. Any estimation would be possible only after touching bases with Language team and defining scope, but such estimations should start with a couple man-months.

Are there other options besides these two that we can look into?

Don't see any around.

@MaxSem This question was not in the deliverables and I apologize - can you explain on a high-level how the extension and labs tool work (if you looked into that)?

In the tool, you select a file, translate strings in it and either download the translated file to upload it yourself, or use OAuth to upload under a different filename. 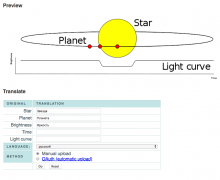 As of extension, since it doesn't work outta the box, you can only refere to the documentation: https://www.mediawiki.org/wiki/Extension:TranslateSvg/2.0#Preliminary_designs