As a PM, I want to know the recommended UX for messaging the previous reviewer in Page Curation, so that we can implement an intuitive messaging experience.

Background: The work that we did in T207442 removed some functionality for NPP folks, and we would like to restore that functionality. Basically, the work of T207442 required that we decouple two sections that were previously tied together: a) “mark as reviewed,” b) send a message to the creator process. When these two sections were tied together, they would adapt to one another. For example, if one reviewer unreviewed someone else’s work, the message would be sent to the reviewer (which would display on the user’s talk page). Otherwise, the default behavior was to send a message to the page creator. Now that we have decoupled these two functions, the process is different. The message section is now meant to notify the page creator. The message is also posted to article talk page. Meanwhile, if someone unreviews someone’s work, a general message (i.e. not customizable) will be sent to the previous reviewer’s user talk page. This change was determined to be undesirable by the NPP community, since they lost functionality that they once had.

For this reason, we want to bring back this functionality. In terms of UX, we need to determine how this will look & how this will happen. Now that there is only one basic messaging section, we'll need to determine if we: a) create two separate message boxes (one for page author & one for previous reviewer, if there was one), b) a drop-down to determine if you message page author of previous reviewer, if there was one, or c) some other option. It may be a good idea to provide a mock-up of both examples, if it's not too much work, along with any other ideas you have, so we can discuss the options as a team. Thank you!

Example of how it used to look (screenshot from video found on New Pages Patrol page): 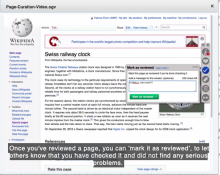 Example of how it looks now: 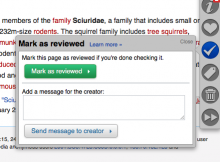 @MusikAnimal, we have some questions for you:

The old version screenshot (as posted above) is when the message is for the creator. If it had already been reviewed, what would the label have stated for the reviewer? ‘Add a message for the previous reviewer,’ for example?

Looks like the message still exists in the code base, though we are no longer using it. It reads "Add a message for the reviewer: (optional)".

If something has already been reviewed, how/why is it still in the New Pages Feed/Page Curation, and how does one reach it?

Some folks want to still check pages that were automatically marked as reviewed (e.g. created by autopatrolled accounts or sysops). There are also some who "review the reviews", to ensure new page reviewers are doing a good job. Those are the examples that immediately come to mind, but there may be other use-cases.

You can filter by review status by setting the "State" in the filters at Special:NewPagesFeed, towards the top-left.

Is there a case where something has already been removed (from any of the views available to NPP) and you’d still want to message the creator?

Yes, conceivably. For me it would depend on the age of the page. For old pages, it's probably best to just fix it yourself, rather than trying to school the page creator about mistakes they made years ago.

In my opinion, if the page is still in the queue and already marked as reviewed, I probably wouldn't blindly send a message to the page creator. I would want to see what communication already took place (this workflow was improved thanks to T207452). The "reviewed" state suggests the previous reviewer thought it was okay, and I'd like to know why in case I missed something, or maybe I saw something they missed. In both cases I'd want to first communicate with them, not the creator. So you could end up with a UI similar to before, where the message only goes to the creator if the page is unreviewed, and only to the previous reviewer if it is reviewed. Because it is a two-part form, the logic of where to send the message probably shouldn't change unless I close and re-open the flyout, otherwise you may end up in a scenario where you unreviewed a page, but your message goes to the creator when you wanted it to go to the previous reviewer, if that makes sense. This still seems not that user-friendly, but I don't have any better ideas, outside adding radio buttons to indicate where the message should go.

Thanks for all the clarifications, @MusikAnimal!

In this case, I think it'd make sense to have a dropdown that decides who the message goes to, and the default can be whatever people are used to (previous reviewer, I suppose). If we think it makes sense we could add a both field too, but from your message it doesn't seem that that would ever be the case.

So for now I am thinking of something like - https://codepen.io/prtksxna/pen/aboXYbR (ignore the lack of CSS)

Thank you so much, @Prtksxna (and sorry for any confusion in my explanation!). I have written a ticket for the team to Estimate. Let me know your thoughts when you get a chance: T233729.

The team will now take on this work in T233729, so I'm marking the design part as Resolved.