While debugging a user script I came across this bug, which may be responsible for some of the issues occurring in the last time.

Tested MediaWiki version is 1.18wmf1, browser is Firefox 10.0.1. The script doesn't call document.write anywhere directly, so all calls to document.write are done by mw.loader.load.

So mw.loader.load should pay attention not to load anything by document.write unless this definitely can be done without problems. In this case several scripts were just missing.

Mentioned In
T105872: ResourceLoader dependencies are not always reliable in debug mode

RL has really changed since 1.18 so I doubt this problem is still around. Could you test with SVN head or the 1.19 branch?

RL has really changed since 1.18 so I doubt this problem is still around.
Could you test with SVN head or the 1.19 branch?

The main change is that RL is now even faster, which means that document.write is used more often. The problem is reproducible on beta.wmflabs:

This gadget loads the real script with mw.loader.load. It should append an (A) to all usernames who are sysops.

Since most of the users are sysops you should see an (A) after many usernames (at least Umherirrender (A/B), and Schnark (A)). But with Firefox 10 they are missing, instead you will find the above warning in the log. In browser which don't implement async loading like Firefox 3.6 and IE 8 the gadget works as expected.

This bug seems to be the explanation for bug 34517, so I'll adjust milestone and importance to match those of 34517.

There is code in mediawiki.js that ensures that document.write() is not used after document ready. I don't know how we'd prevent this in a better way.

I am unable to reproduce the issue described in Comment 2 using FF 9. The "A" and "A/B" markers appear correctly.

nor can I reproduce it with Chrome 17

There is code in mediawiki.js that ensures that document.write() is not used
after document ready. I don't know how we'd prevent this in a better way.

Since no gadgets are working at the moment (probably some caching issues) I can't test the bug, but I'm quite sure that this really is a bug that needs to be fixed as soon as possible.

I can still reproduce the issue with Firefox 10 on wmlabs.beta. I changed the call to mw.loader.load to use three parameters. When I use true for the third parameter everything works, no matter how often you reload the page. See screenshot. 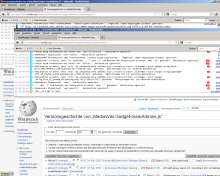 But when I use false for the third parameter I sometimes get the warning about an ignored document.write, and the marks are missing. See screenshot. 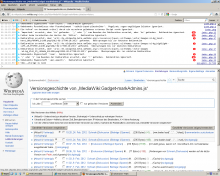 Fixed in r112533 by making the third parameter (async) default to true if a URL is specified, and to false otherwise. Will deploy this to the live site in a minute.