Screenshot of the problem

It would be beter to either:

Scope of the problem:

When users change input methods they are only able to chose from those languages for which input methods exist. This prevents users for selecting languages lacking input methods (preventing the reported problem to happen). However, initially input language defaults to the site language, which may lack input methods. Thus first-time experience of users of those sites may be affected. 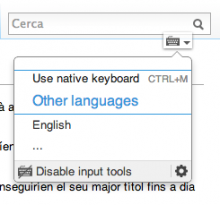 What do you propose we do to mitigate this? 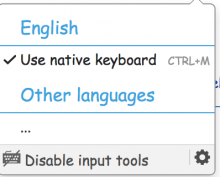 Should be fixed; Inconsistent UI can lead to confused users. Tracked for development at https://mingle.corp.wikimedia.org/projects/internationalization/cards/3652.

Change 80017 had a related patch set uploaded by Amire80:
WIP: Show an autonym for languages that don't have input methods

Change 80017 merged by jenkins-bot:
Show an autonym for languages that don't have input methods