As soon as your cursor is over the mw-notification-area (made visible in other screenshot), the dropdown closes.

Expected behaviour: Can move/protect page. Dropdown does not close out of the blue. 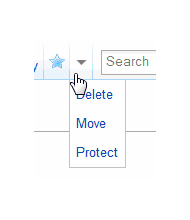 I suppose this regression was introduced by fixing https://bugzilla.wikimedia.org/show_bug.cgi?id=50870 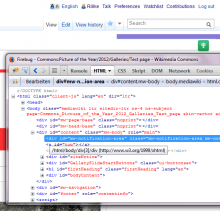 The culprit is this line:
padding: 1em 1em 0 0;
in mediawiki.notification.css. It causes .mw-notification-area to have a non-zero height and thus cover other elements, like the dropdown.

There are two obvious ways to fix it which don't work:

Unless somebody has a better idea, we should probably implement toggling 'display' in JavaScript.

So I was right that VE is *pushed* by the Wikimedia Foundation: https://bugzilla.wikimedia.org/show_activity.cgi?id=52659

So I was right that VE is *pushed* by the Wikimedia Foundation:
https://bugzilla.wikimedia.org/show_activity.cgi?id=52659

I'm confused. What are you saying?

Unless somebody has a better idea, we should probably implement toggling
'display' in JavaScript.

So I was right that VE is *pushed* by the Wikimedia Foundation:
https://bugzilla.wikimedia.org/show_activity.cgi?id=52659

It certainly is. While this regression outside of VisualEditor codebase is regrettable, and hopefully will be fixed soon, the VE team have pushed lots of great JS into core, and fixed bugs like bug 38081 which will benefit Wikimedia Commons.

I have bumped the importance up (but not wedded to it) as it is a regression caused by VE and affecting non-VE environments, and was reported two months ago, and the code change causing it was deployed in July.

In addition to impacting sysops with three ca-actions, it also affects non-sysops on every wiki, although not as pronounced. Non sysops only have the the 'Move' button in the ca-action dropdown of Vector, and it is partially inaccessible. If the user slowly moves their mouse cursor down into the dropdown, they can click the move icon if the click on the first few pixels above the word 'Move' - if they continue going down so that their mouse cursor hovers over the word 'Move', the drop down disappears.

jforrester: Should this really be highest priority (set in comment 7), or be kept as high (as you did in comment 4)?

jforrester: Should this really be highest priority (set in comment 7), or be
kept as high (as you did in comment 4)?

I am resetting this to high priority only as per the maintainer judgement in comment 4.

Ugh, I guess no one will do this if I don't.

Change 109124 had a related patch set uploaded by Bartosz Dziewoński:
mediawiki.notification: Hide #mw-notification-area when it's empty

Rephrasing bug title as it was cut-off.