Our client side error counting spiked from 3k errors a second to 10k due a regression likely caused by T205128. This broke RelatedArticles for some users.
The problem was likely due to the code in mediawiki.template.hogan loading before mobile.startup (which contained a missing webpack runtime module).

While this problem should not happen again it shed some light on the ResourceLoaderMuHoganModule that lives in RelatedArticles and QuickSurveys as being brittle. In fact, in Minerva desktop this code can lead to both Mustache and Hogan being loaded in the client.

I'm seeing this error when I click Special:Random (and land on a lesser used page)
On refreshing, I do not see the error.
I can only reproduce this error on iOS Safari 12.0 on old pages, which makes me think this is a cache problem.

The error triggers statsv, so I think could be contributing to this nasty spike: 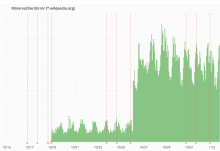 I feel like we should stop using templates in this repo.

@Jdlrobson When you pinged me about this (before the task existed) I found a couple of things that might be useful. It's inconclusive though, but it might help get you closer to the culprit.

Using the same browser configuration and browsing around the wiki, I was also able to reproduce this. For me it happened at https://en.m.wikipedia.org/wiki/Cathedral_glass. And I can consistently reproduce it there now.

For convenience, I also tried reproducing it on desktop and while it doesn't reproduce in Chrome (macOS), it does reproduce on regular desktop Safari 12.0 (macOS 10.13) as long as "Developer > User Agent > Safari - iPhone" is set. (In all cases, using the m-dot domain in the url.)

Which means it probably isn't specific to how iOS or Mobile Safari behave, but rather might be specific to how our code behaves when given a User-Agent string. Maybe that'll help you find the underlying cause?

Below are a couple of artefacts I captured that might help with debugging. The following modules queued from the cached HTML in Varnish for the above url:

Web server that served it in the last 24 hours and Varnish layers that cached and re-used it since:

This might be a red-herring, but I noticed part of the mediawiki.template.muhogan code might not be working as intended.

What I've got so far is that:

Based on this I would conclude that:

I haven't found the external factor, but I have confirmed the first conclusion. Inspecting mw.loader.moduleRegistry['mediawiki.template.muhogan'].script shows that its implementation contains the following:

Which means that implementing "mediawiki.template.hogan" basically just consists of the following two statements:

The transported code that calls mw.template.registerCompiler() is not executed! (It is only stored as a function inside an array.)

Presumably there is another piece of code somewhere that defines the real webpackJsonp and calls the pushed functions. However, that code is not a dependency of mediawiki.template.hogan.

Presumably there is yet another piece of code that, on desktop UAs and on most pages for mobile UAs, happens to trigger this earlier.

I'll leave it to you to investigate further. Good luck :)

Mmm interesting.. I wonder if https://gerrit.wikimedia.org/r/#/c/mediawiki/extensions/MobileFrontend/+/469153/ will take care of this when it gets deployed...

Mmm interesting.. I wonder if https://gerrit.wikimedia.org/r/#/c/mediawiki/extensions/MobileFrontend/+/469153/ will take care of this when it gets deployed...

New train rolled out with T208549 becoming unblocked. Already i am seeing a drop in errors so looks like https://gerrit.wikimedia.org/r/#/c/mediawiki/extensions/MobileFrontend/+/469153/ was likely cause.

Looking into Timo's description in T208605#4716965 I can see clearly now that load order is defined by ResourceLoaderMuHoganModule by abusing the targets system (loading a dependency based on the target).
One thing that is interesting to learn is that Minerva desktop is loading both Mustache and Hogan so we'll probably want to address this problem before dismantling that system.

Thus, the issue was happening due to a failure in https://gerrit.wikimedia.org/r/#/c/mediawiki/extensions/MobileFrontend/+/469153/ to load the Hogan compiler.
I think we're safe from this bug showing its face again, and there's not much we can do here, other than find a way to remove the need for ResourceLoaderMuHoganModule (ideally by standardising on one template library across desktop and mobile).

Switching these to jQuery would be pretty trivial.

I'm skipping QA for this one, as QA involves verifying the surveys are displaying and we have 3 tasks already in QA which will make sure that is true. Since I merged the code I'm looking for a developer that's not be to sign this off.