Set up a working instance of Argo Events/Workflow/UI to demonstrate/evaluate its feasibility as a CI replacement. It should at the very least: 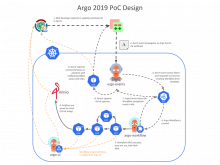 Argo comprises a few different projects that have well defined concerns and would work together to provide a fully functional CI system, namely Argo Workflow for task definition/execution, Argo Events for handling of events from external and the internal system, and Argo UI that surfaces details about workflow history and progress, and artifacts. Similar to other "cloud-native" systems (e.g. Tekton), it works by defining a number of Kubernetes Custom Resource Definitions (CRDs) and controllers installed to a k8s cluster that respond to CRD changes.

Three different systems were set up to complete the PoC, all installed to a single node Google Kubernetes Engine cluster:

Argo would make for a flexible/powerful/reliable CI system for WMF projects granted:

Watch the asciinema tty-cast to see how a user might interact with Argo on the command line. (See Argo documentation for web UI examples.)

I'm still working on a thorough summary of this PoC setup, but here's a quickstart on how users might interact with it—on the command line.

Transcript (without CLI output of course):