NOTE: This task should be taken on when max-width and search have been implemented (T249363) and deployed for at least 2 weeks across test wikis and the A/B test has completed (T265333). Current test end date: Nov 4

As part of the max-width layout work (T246420), a layout-max-width.less file was created containing all the styles relevant to the max-width work along with a VectorLayoutMaxWidth feature flag to make the deployment less risky. While the feature flag is helpful in the short-term, it has a high carrying cost [1] and will be difficult to maintain in the long-term. The max-width design should just be part of the modern Vector experience (non-configurable) and the feature flag removed as soon as possible following its deploy.

Similarly as part of T249363 a feature flag was added for the search in the header feature.

Most of these styles should be easy enough to merge into layout.less or Sidebar.less, but there are several pending questions:

Load Vector modern on https://en.wikipedia.beta.wmflabs.org/wiki/Main_Page and compare with en.wikipedia.org looking for any visual inconsistencies.

Given the max-width is disabled on certain pages, many of the styles currently found in layout-max-width.less and the file itself will need to stay

Thanks for creating this @nray. Have expanded the scope to include search (I believe these two are very closely tied) and will move back to backlog for now. Will talk to Olga about prioritization. There is some benefit to keeping the flags until we have community acceptance but agreed about the cost of its existence.

This is blocked on the end of the A/B test in T261648. I can't analyse until that has happened.

This task should be pulled into the sprint immediately after the A/B test is completed. No point in this hanging out in "blocked on others"

Given the train delay, this can be worked on next week. Even if the changes are merged on Monday the A/B test will have concluded, before this code has ridden the train.

Load Vector modern on https://en.wikipedia.beta.wmflabs.org/wiki/Main_Page and compare with en.wikipedia.org looking for any visual inconsistencies.

The only inconsistencies that appear are at narrow width resolutions. 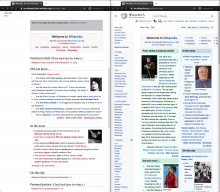 The only inconsistencies that appear are at narrow width resolutions.

The color formatting of the sections goes away at narrow width resolutions in beta.

This is intentional and a decision made by the editors so this is fine.

the Welcome to Wikipedia section doesn't wrap around in production but does in beta.

Thanks for flagging this. @sgrabarczuk not sure if we have a process here for notifying community of problems with content at lower resolutions, but this would need to be fixed in the main page via the edit button.

This can skip QA in production as there's nothing to compare with when this rolls out. Editors will let us know if there are any edge cases we may have missed.