Mentioned In
T75364: Run subset of Wikidata browsertests on every commit on Gerrit.
T59560: browsertests: triggers for MobileFrontend

Assigning to myself per an e-mail thread with Antoine, Chris, and Željko.

And I manage to get VisualEditor + Parsoid to be setup automatically using Jenkins. The related job configuration is pending in https://gerrit.wikimedia.org/r/#/c/100800/ (need to be polished).

Sorry I wasn't able to get to work on this bug quickly Antoine - let me know if you want me to work on creating a new browser test that will succeed in this scenario (the existing anon test will fail since it presumes the existence of a User page in the target wiki).

Jeff : sure, if you can get a test that roughly does:

That would be a nice first step that would validate the Jenkins job and VE/Parsoid is properly setup :-)

I went ahead and amended the existing Gerrit ID:

…with an additional anon test case that edits a random page (which will likely always be the "Main Page" for a fresh wiki install).

The test case currently does not work with PhantomJS, so I'll spend more time tomorrow trying to figure out why PhantomJS can't click into Visual Editor editing mode.

The test case currently does not work with PhantomJS, so I'll spend more time
tomorrow trying to figure out why PhantomJS can't click into Visual Editor
editing mode.

In phantomjs, "edit" link is not visible by default, see attached screen shot.

In any case, we're getting closer step-by-step, so I'll continue to work on this.

Could it be that phantomjs lack some javascript functionality that would cause VisualEditor to disable itself ? Might be a browser whitelist as well. Honestly, I have no clue how it is handled in VisualEditor.

Looks like it's not a problem with PhantomJS being blacklisted, per the VisualEditor browser blacklist which begins at line 890 of this file:

…so I'll spend some more time tomorrow to see if I can figure out why PhantomJS doesn't seem to work as intended even when navigating directly to an "editing mode" URL.

Looks like phantomjs is blacklisted (or not whitelisted). There is no visual editor edit option (see screen shot). 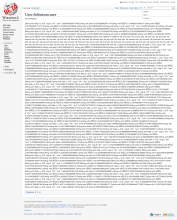 Ah, I believe Željko is correct - looks like VE has a whitelist in addition to a blacklist. See section beginning on line 169 in this file:

Will talk to the VE dev team and see if we can get PhantomJS whitelisted.

If a browser is not on the blacklist, and meets the functionality criteria, then the edit tabs for VisualEditor should show up. A browser not being on the whitelist just means the user gets a warning when they edit. Adding PhantomJS to the whitelist will not make VisualEditor appear if it doesn't already.

(Also, you can bypass the blacklist with ?veaction=edit&vewhitelist=1 which should trigger VE even if you don't have a functional browser, as long as it has JS.)

Strange. I am pretty sure PhantomJS has JS. :)

But, this simple script takes screen shot that shows it can not load visual editor. 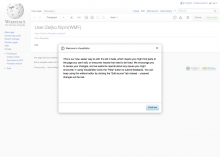 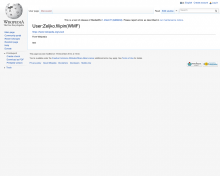 Timo pointed me in the right direction:

Turns out PhantomJS is built with an old version of JavaScriptCore that is missing the "bind" implementation, which is needed to satisfy Visual Editor's es5 features check:

…but a workaround is available:

…so I'll investigate the workaround next.

After a pairing session with Željko, I went back to basics and tried to get Function.prototype.bind injection working directly with PhantomJS (ignoring the rest of our test infrastructure for the time being).

Per the attached scripts, I tried all of the relevant methods noted in the PhantomJS API documentation:

...and still no luck. The Main_Page loads fine, with the exception of the VE editing link/tab, which is available to other browsers (Chrome, Firefox, etc) at the same URL.

Per a suggestion from Antoine, it might be time to investigate using Firefox in a headless mode as a potential substitute for PhantomJS.

Reason:
Abandoning this patch since we have implemented support for headless browser testing in the mediawiki-selenium Rubygem (rather than implementing it in each individual repo).

Change 110468 had a related patch set uploaded by Jhall:
[Browser test] WIP Headless test for VE verification on a fresh Mediawiki install (as on Integration server).

Reason:
Abandoning this change since I'm going to start fresh with a slightly different approach.

Reason:
we are using something different than the ciwmf profile.

Basic test is merged and in place, so marking this bug resolved.