Today I observed a user who was trying to load an article that was in progress of translation. It failed, and the article's content couldn't be seen. JS console showed an error:
Uncaught Error: Syntax error, unrecognized expression: #.D7.9E.D7.A7 ... etc.

This happened in translation of "פתח תקווה" from Hebrew to Spanish.

This comes from ext.cx.translation.loader.js line 311.

jQuery probably tries to parse #.D7.9E.D7.A7 as a selector, and it's a non-ASCII string from article content that was encoded in a way that jQuery cannot parse.

This causes apparent data loss—the data is probably stored in corpora, but cannot actually be loaded. Non-ASCII strings are very common in Wikipedia, so it's an important issue to fix.

There were many similar complaints on Talk:CX lately about such problems, and this is probably the reason.

An article has been requested by the devs as an example of this problem. Thanks.

I'm not sure this example is exactly this bug or not but you can check Biological network from English to Persian (fa) which is being translated by User:Z.navidi

I don't have much details as this is report from other user.

The issue is caused by a CSS query selector that starts with #.. That is invalid and throws an error. In other code we long ago avoided doing $( '#' + random_input ) just because of this issue, but in the loader code there were still calls like that.

And the reason why the CSS selector starts with #. is that for non-ascii headings, MediaWiki uses this .DE.AD.BE.EF type hex encoding for legacy reasons.

And one more issue is needed to trigger this error: the cxc_section_id column is varbinary(30). On production sites the ID's get truncated to length of 30 bytes (and giving the encoding takes ~6 bytes for each non-ascii character... that means most of the headings. On my wiki I get SQL errors that prevented the article from being saved, because I have strict mode enabled.

After fixing the CSS selector issue with a patch, to avoid the JavaScript error, this is what I got: 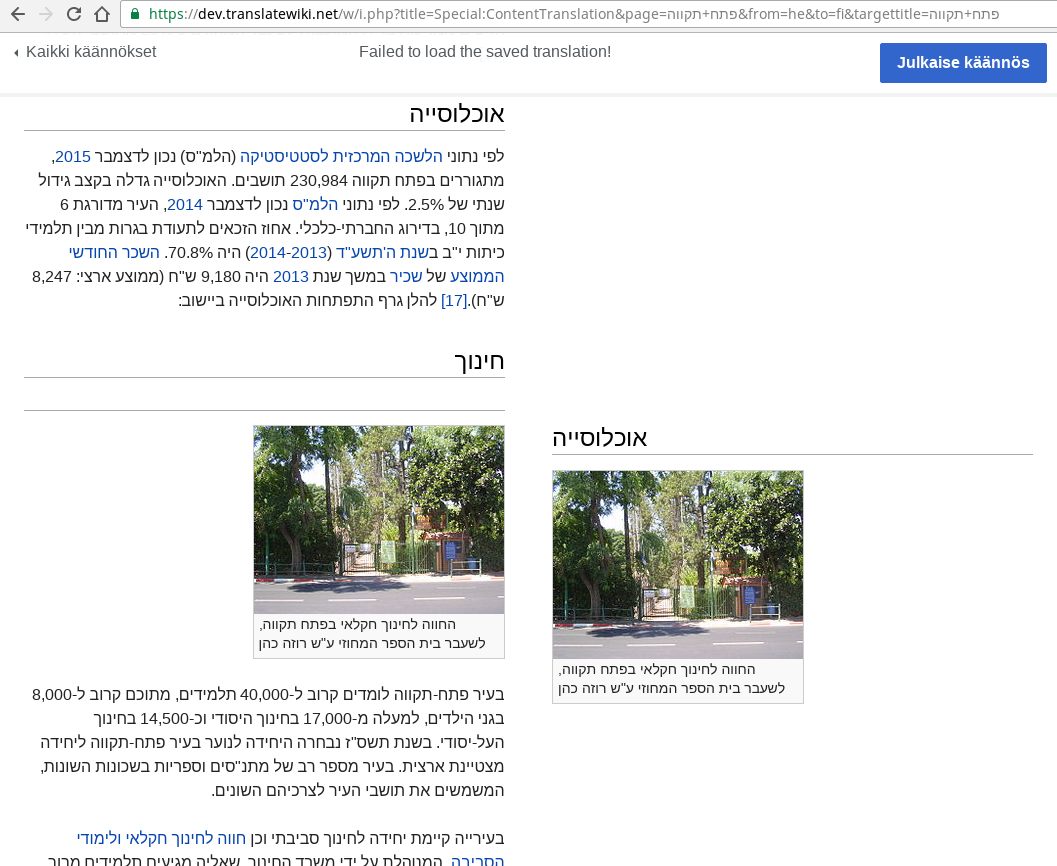 I had three translated sections:

*חינוך (now completely disappeared!, but has corresponding empty section in the source column (the line without text)

[1] Which is still associated with the correct heading, just mis-aligned. Curiously I can re-translate this heading now, so I have three sections which are connected:

This leads me to conclude, that unless my change broke the section alignment code (which is highly unlikely, as the only change is using document.getElementById instead of querySelectorAll), the restoration code is borked and causing data loss.

Curious, this may also resolve some alignment bugs such as T152098.

I don't have much details as this is report from other user.

The <h{1,2,3,4,5,6}> tags used to have parsoid style ids(Example: mwAy) and we did not had this problem. Recently parsoid changed the ids of header to match the section anchors produced by PHP parser. See the change : https://github.com/wikimedia/parsoid/commit/082ea420cf73e53a855e5503e4f4fd0f04b5ad74 based on T102209: Derive heading ids from heading name, the same way MW core does

I tested, and this seems to work now in production. Leaving it open in case more work is needed.

Another instance of a very similar issue, which still appears today, so it's not entirely fixed. I have a reproducible example; sorry it's silly, but that's what I have ;)

Could you post file and line numbers, or rather the whole backtrace with debug mode enabled?

Could you post file and line numbers, or rather the whole backtrace with debug mode enabled?

Change 331674 had a related patch set uploaded (by Santhosh):
Change the h1,h2.. ids to fixed length md5 based ids

The fixes were done by @Nikerabbit and @santhosh. Waiting for deployment.