Fedorovsk Unicode is designed to mimic the typeface used by Ivan Fedorov, who produced some of the first printed books in Moscow. It is intended primarily for reproducing publications from that era, either in an academic setting, or as modern Old Rite liturgical texts.

Monomakh Unicode is a Cyrillic font implemented in a mixed ustav/poluustav style and intended to cover needs of researches dealing with Slavic history and philology. It also provides Latin characters in a similar typeface, which is useful for working with multilingual academic editions.

Menaion Unicode provides both Cyrillic and Glagolitic characters and is intended for representing text from Ustav-era Church Slavonic manuscripts.

Any progress here?
@Amire80 can you help?

Please! It's really useful not only for Russian but for Ukrainian also. In our languages Church Slavonic texts usually citing in modern texts without additional styling, we distinguish modern text from cites by font only. It's common tradition since beginning on 18 century while modern font (гражданский шрифт) was designed. So now, without these fonts we are not able made adequate copies of many sources in Ukrainian and Russian Wikisources and we do not able made Church Slavonic (i. e. Church and all pre-18 century) cities according to our typographic traditions in Russian, Ukrainian and possible both Belarus Wikipedias.

Apologies for delay in addressing this. UniversalLanguageSelector project is under maintanance so we could not give much attention.

This is amazing, thank you!
Will this also works on Wikisource by T219065?

I did not quite understand. Now fonts will be downloaded automatically for all readers? Or will each reader required to register in WMF, and then manually enable font autodownloading in the ULS interface (by clicking on the gear icon near the list of interwiki)?

UniversalLanguageSelector project is under maintanance so we could not give much attention.

@santhosh: That sentence implies that when you maintain something you do not give it much attention... :)

Checked in enwiki and wnwikisource (wmf.24). There is still some incomplete rendering for cu lang option. @santhosh - something else should be done in terms of downloading fonts or something? 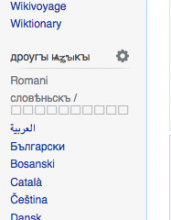 @Etonkovidova we have not mapped these fonts to cu by default. So people need to choose one of these other than "System font" option.

can be verified at these test pages:

Thx, @santhosh - yes, everything is in place.