T195477 changed the way anchors for forms on lexeme pages are structured, now not containing the lexeme part any more.
The lexeme page history shows all revisions of that page incl. the change summary. If a change happenend that added a statement to a lexeme form as property, a link to said form is rendered.

Due to the change of format there seem to be history entries which still contain links using the old anchor format. 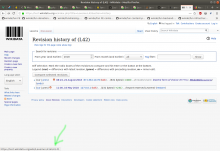 It seems this is only a problem with historic entries. New ones are fine-ish: https://test.wikidata.org/w/index.php?title=Lexeme:L42&action=history

Turns out the wikitext for the comment from the summary is directly in the database as wikitext. Thus is seems not savely possible to fix the old entries.

Screenshots are from system recreating the problem:

I actually noticed a different problem on L42’s history on testwikidata:

In the older edit (below), the link [[L41#L41-F1]] is rendered as a link to the L41-F1 entity, using the representation of that form (MediaWikis – plural: the lexeme’s lemma is MediaWiki, singular). In the newer edit, however (above), the link [[L103#F1]] is rendered as a link to the L103 entity, using the lemmas of that lexeme, instead of the representations of its first form (which would be just merge sorce). So that’s two related things:

Unfortunately, I don’t remember where that component actually is right now, and I can’t find anything relevant in WikibaseLexeme’s wiring files.

Results of the investigation so far:

The relevant pattern is in WikibaseLexeme/src/Domain/Model/FormId.php:

However, simply removing the first part of the pattern breaks \Wikibase\Lexeme\Domain\Model\LexemeSubEntityId::extractLexemeIdAndSubEntityId, which relies on the two-part form.

I looked a bit into this as well, and I think LexemeHandler::getIdForTitle needs to be updated. It currently tries to “parse” the fragment as an ID; in addition, it should also attempt to parse text + fragment as an ID.

The first part of this is fixed with the above change, I’ll try to do the second part now.

It’s not the nicest thing in the world, but I think it’s acceptable. Alternative suggestions are welcome, though.

Related but independent is another fix in WikibaseLexeme.

Change 473587 merged by jenkins-bot:
[mediawiki/extensions/WikibaseLexeme@master] Fix the fragment of old-style links to forms

Tarrow moved this task from Peer Review to Test (Verification) on the Wikidata-Campsite (Wikidata-Campsite-Iteration-∞) board.Nov 19 2018, 9:56 AM2018-11-19 09:56:38 (UTC+0)
Lydia_Pintscher closed this task as Resolved.Nov 21 2018, 10:21 AM2018-11-21 10:21:25 (UTC+0)
Lydia_Pintscher moved this task from Test (Verification) to Done on the Wikidata-Campsite (Wikidata-Campsite-Iteration-∞) board.
Log In to Comment
Content licensed under Creative Commons Attribution-ShareAlike 3.0 (CC-BY-SA) unless otherwise noted; code licensed under GNU General Public License (GPL) or other open source licenses. By using this site, you agree to the Terms of Use, Privacy Policy, and Code of Conduct. · Wikimedia Foundation · Privacy Policy · Code of Conduct · Terms of Use · Disclaimer · CC-BY-SA · GPL