This is a Wikipedia mobile app for KaiOS. It is built with web technologies but is installed on the phone like a native app.

It is rather easy to run it locally in a browser. Just clone the repo and run npm install and npm run dev. Set your browser resolution to 240x290 for a realistic experience.

Which code to review

Please initiate the performance assessment by answering the below:

We're not looking for "best possible performance" but best possible time to market with adequate performance. We expect the features that don't require fetching data to feel snappy and those that do to feel responsive (not frozen). However, we have yet to design the article loading screen.

We've found the css engine (Firefox 48) to be the main weakness. Laying out a large article can take 10 seconds or more. For this reason we only keep a single section in the DOM at a time and try to keep reflows to a minimum.

We transform the article API output quite a bit. This can take 250ms or more or very large articles.

Breaking down large components into as many pure components as reasonable will greatly reduce the amount of rendering preact has to do.

Removing or memoizing calls to getBoundingClientRect() or other expensive DOM APIs could help.

We have to rewrite useNavigation so it doesn't renumber all the nodes all the time. We don't need it anymore.

Maybe include the i18n files in the bundle instead of fetching individual <lang>.json files on startup.

We use the console's time/timeEnd functions for ad-hoc measurements but nothing is in place permanently.

Note to self: Look at our previous "Wikipedia for FirefoxOS" and "Wikipedia for Windows 8 Metro" apps that were previously developed and abandoned (and were also web-based apps).

@Krinkle We are planning to release this app in the next couple of weeks. Would you please give us an indication of when this is likely to be reviewed by you/your team?

Hi @AMuigai I want to check if its ready for testing?

I don't have a Kai os phone at the moment (@Krinkle has one) but I tried locally in Chrome and all content don't generate for me, for example going to Barack Obama, scrolling to the next page after the top image is empty? I can see the small scroll bar is changing when going to the following pages but they are all white. Or is that a Chrome thing where it doesn't work as expected? 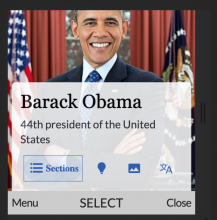 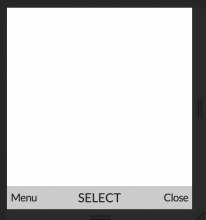 I got three things:

I'll be on leave early next week but back on the 27, I can start whenever then when one of your team mates have time. At that time I'll make sure I have an Kai OS phone.

I'm happy to do that, there isn't a proper development guide in the repo yet so it's better to do it together, and let's schedule a day time when you back.

Great lets do it @hueitan ! I'll work on a short list of things that I will add on the task tomorrow, so you have some time to read through.

Ok, there a couple of things I want to start with:

Please use firefox and see if it works. If it doesn't please let me know.
Since the OS is based on FirefoxOS we optimise for that browser since the experience on the phone is similar.

Great lets do it @hueitan ! I'll work on a short list of things that I will add on the task tomorrow, so you have some time to read through.

Assuming this task is about the KaiOS-Wikipedia-app project, hence adding that project tag so people who don't know or don't care about random WMF team tags can also find this task when searching for projects which they are interested in.

I've had two meetings with @hueitan and @Jpita and will summarize what we've been talking about here. For me there has been two things that makes it harder to test the performance on Kai OS and get realistic numbers:

I've gone through the application and tested in on my Nokia 2720. I have one more thing I want to do and that is have a closer look at the API cache in the application and see if there's an easy way to still keep the cache simple but have some kind of limit in the cache.

There's one thing that I think is the most important thing and that is collect performance data from real users. We can do that with the User Timing API and beacon back the data. From my point of view the interesting metrics are the time it takes to get data from the API and the time it takes to parse the result on the phone. The parse time is interesting since the phones running Kai OS usually is low on CPU and memory compared to other phones. The API is interesting since if the API call hasn't been cached on the server, the call can take a couple of seconds (or more). Here's an example when the call to get the media for the Obama page takes 1,8 s. I've seen faster but I've also seen slower. If you hook devtools you will see the same thing as me, when the API call isn't cached.

At the moment the page is rendered after all the three API calls has finished and are parsed. One idea could be async load the media api call and start to render the page without it (T246681) since it looks like that API call is the one that takes the most time. However I would wait with that and first make sure we collect data from our users.

I really like the approach of the API cache that it is implemented, its super simple and simple code, great! I'm a little worried that we could reach the limit of memory for users on Kai OS. I haven't got around to crash the app yet, and maybe its not possible but I would feel a little better if there's a limit of cached API calls. I'm thinking splitting the cache for pages and the rest and then set the limit of X cached pages and still trying to keep the cache simple. I'll try to do a PR up for discussion and then you all can decide how you wanna do it with.

We send a request for every key stroke. That means when I cycling through each key, we send a request to the backend. @hueitan told me you have multiple ways of solving that and you could add the task numbers just to keep track of them that would be great!

I also not sure about the pattern of sending search result for just one or two characters, I know we do that on desktop and mobile today but I think Kai OS is most used where you have slower connection speed and I feel unsure if you as a user would actually get the result before you entered the next character? I haven't been able to simulate a slow connection to verify it, but maybe someone in the team have?

For me the important thing is to get metrics from real users, that will give us a better picture of how the application is doing in the wild.

I also have one non-performance related feedback. I think in future versions we should aim for beacon back errors, or at least number of catched errors. Since we fully run on the users phone, we should make sure that we get information back if things aren't working. I don't mean the same as T226986, just lightweight collect errors so we can see how we are doing. Right now the only way we will know if the application works correct is when we get a new page view right?

Thanks for the summary @Peter

We send a request for every key stroke. That means when I cycling through each key, we send a request to the backend. @hueitan told me you have multiple ways of solving that and you could add the task numbers just to keep track of them that would be great!

It's here T246786: Trigger search only for confirmed characters

@Peter when I need to control the network behaviour I use a tool like Charles, it allows you to create a proxy and funnel the network calls through that proxy.
You can filter calls and change the speed of the connection.
That one is not open source and I haven't found a good open source one (or user friendly).

@Jpita yes but can you set Firefox on the phone to use the proxy? I didn't find a way to do that but maybe there's a way, the documentation isn't super detailed. I can have a look again.

Yes, you change the wireless settings on the phone to go through the proxy
created on your computer.

Given that the first review was completed, and tasks related to improving performance created, I am closing this as resolved.