There are many classes of reliability issues (e.g. failures/misconfigurations in intermediate networks) that we only find out about via direct, manual reports from users, or (for very widespread cases) we notice because traffic is 'missing' and below expected rates.

Some sort of 'external' monitoring is the usual solution to such blind spots, but of course such solutions come with their own false positive errors and other limitations (requires agreements with commercial providers; sometimes limited APIs for scraping result data; often reliability problems that are specific to the monitoring provider's infrastructure rather than something 'real'; generally such a provider's probes run within datacenters instead of on Internet edges / from within residential ISP networks; geographic distribution of provider's probes don't match userbase geographic distribution; characteristics of synthetic traffic doesn't necessarily match characteristics of real traffic; &c. &c.).

There's another option, which is asking browsers to send you an error report some fraction of the time when they can't fetch from your site. This is a W3C draft technical report, the Network Error Logging API, part of the broader Reporting API. Currently the NEL API is implemented and enabled by default in only Chrome >=71 and Edge >=79, but that's still a large fraction of all traffic and users.

Asking browsers to enable NEL is implemented by serving HTTP response headers Report-To and NEL, which together define a set of endpoints that can receive reports, sampling fractions for each of failures and successes, and a TTL for this entire definition to be stored in the user's browser. See Sample Policy Definitions.

See Sample Network Error Reports
Error reports are full of PII. They're sent from user IP addresses, contain the URL that the user was attempting to fetch, any Referer: from that original request, and in the future could optionally include specific request or response headers from the original request. They require TLS over the wire and deserve all the same protections that our logs data gets at rest.

v1: Improvements that aren't too hard

e.g. it might be useful to also have them in their own table in Hive.

If we do all the EventGate stuff right, importing them into Hive will be natural (and soon more automated).

Attempt some sort of alerting based on receiving NELs.

The simplest version of this could be just throughput monitoring on the NEL topics in Kafka:
https://github.com/wikimedia/puppet/blob/e936a98f2aebe559eab6777d3b712af1079e3350/modules/monitoring/manifests/alerts/kafka_topic_throughput.pp

Determine whether or not we want additional stream processing to split apart NEL responses into their component events, as each POST made to the reporting endpoint is potentially a batch of multiple error reports.

Determine whether or not we want additional stream processing to split apart NEL responses into their component events, as each POST made to the reporting endpoint is potentially a batch of multiple error reports.

Looking at the spec, I think that's how they're reported: https://w3c.github.io/reporting/#sample-reports

There's three degrees of freedom to play with here:

I'm also thinking that TTLs should initially be short: let's say 1 hour to start with, and later on increasing up to something on the order of a week? The tradeoff to be made with TTLs is:

We could probably do some analysis to figure out the per-user distribution of pageview inter-arrival times (or maybe that's already known? # of 1-day active users vs 7da vs 30da gives you enough of an idea), but I was thinking to keep it simple and just say "1 hour TTL to start, 1 week TTL when we're confident". The sampling fraction matters much more, anyway.

As for setting a sampling fraction, that's where things get really tricky.

I'm still not sure how best to resolve all the tensions here, and certainly not how to do so in a principled way. Thoughts are appreciated!

For now I think it could be okay to empirically set a sampling rate that seems reasonable, starting off low and then ramping up (but not too high).

We could probably do some analysis to figure out the per-user distribution of pageview inter-arrival times (or maybe that's already known? # of 1-day active users vs 7da vs 30da gives you enough of an idea),

Let us know if there is any data we can get you.

Thoughts that come to mind:

For sampling ratios I think we want to look at user requests, not pageviews or devices.

The peak of pageviews last week was 27 million per hour. Say pageviews are made of about 20 requests in average, the peak of requests per second would be 150,000 for all domains for user traffic alone (this is an over estimate)

For last quarter Chrome (all versions) was about 22.2% and Edge (all versions) was 4.2%, of *all pageview traffic*. That makes 26.4% . Extrapolating to all traffic, that would leave us about 40,000 requests per second potentially affected by this protocol (all domains). That seems a lot of traffic that might be potentially affected. We can enable just a small wikipedia, like pt.wikipedia that represents 2% of traffic (800 requests per second of Chrome plus Edge requests ) at 1%, which will give us 8 request per second (again, an overestimate). That seems easy to try and not likely to cause problems with a TTL of 1 hour. Probably a 10% sampling is also easily sustainable. 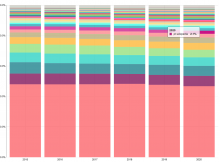 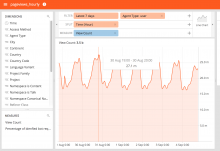 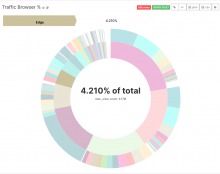 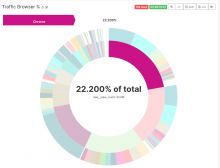 on a long TTL, if we also set the sampling fraction too high in a record that then persists for a long time, then eventgate and/or logstash could be overwhelmed in the event of a large outage.

There's three degrees of freedom to play with here:

I'm also thinking that TTLs should initially be short: let's say 1 hour to start with, and later on increasing up to something on the order of a week? The tradeoff to be made with TTLs is:

We could probably do some analysis to figure out the per-user distribution of pageview inter-arrival times (or maybe that's already known? # of 1-day active users vs 7da vs 30da gives you enough of an idea), but I was thinking to keep it simple and just say "1 hour TTL to start, 1 week TTL when we're confident". The sampling fraction matters much more, anyway.

As for setting a sampling fraction, that's where things get really tricky.

Thanks very much for starting this task and all your work on it so far!

Yep! I was planning on making the two TTLs equivalent -- I think this will be fine, and it's what the current users do (P12583)

I have only vague thoughts for how we might use success_fraction. Here's one thing I've imagined:

There's a lot of handwaving and open questions embedded in the above, though 😅

Ah, I think you got confused by the spec, which doesn't clearly differentiate between origin-provided configuration and user-agent-internal state. retry_after isn't something we publish; it's a value computed and maintained by the user-agent itself. (Same for failures.)

To address the stated assumption: I think it's incredibly unlikely that we could get so many NELs that we overwhelm the Traffic infrastructure itself*. I think we could potentially overload Logstash, but likely only temporarily, and finally I think we could easily overwhelm the eventgate-logging-external EventGate deployment running on Kubernetes, which at present is just a handful of replicas. But we can easily scale up that last piece, if needed.

(*: The rate at which NELs can be emitted by user-agents is naturally limited by the rate at which users can request pages; one NEL upload can contain many reports in its payload; NELs are 'cheaper' to serve than actual page fetches on most axes at most layers of the stack.)

As of about 13:30 UTC today, we started serving these response headers on group0 wiki domains.

There's a surprising amount of two classes of traffic:

There is a lot of the second kind of traffic. It's not tremendously diagnostic of anything for us -- well, unless we're seeing many such reports which also have a long elapsed_time, which might indicate latency/timeout issues somewhere in the stack. And there's so much abandoned that it will limit the sampling_fraction we can set on the larger wikis.

There's also a fair bit of phase=application, status_code=200, error type=unknown reports. I'm not sure what these mean.

(*: There's lots of hidden complexity here, because some of the error reports we receive are for requests that either the user and/or the browser later issued retries for, possibly after we also logged the original, failed request(s)! At the same time, there are error reports we received that correspond to requests we never received in the first place. We'll staunchly ignore this: it's very hard to model, and since our only goal in modeling is to pick a reasonable sampling fraction, we only need something approximate, we can tune it later, and finally, we can cross our fingers and assume/hope that the relative ratios of all these flavors of error will remain the same. 🤞)

Looking at the webrequest table for the past week, we receive about 128*81.4M requests/day (~121K/second). 52% of this traffic is Chrome or Edge (@Nuria I think your 22.2% figure didn't include mobile Chrome...? but as turns out mobile does send NELs). So, if we were to sample 100% of errors on all traffic, and the above holds, it would be somewhere in the neighborhood of 200 reports/second steady-state.

We don't want to hit Logstash too hard with new events. It receives approx 92M events/day (~1065/second). We should limit # of reports to be at most a few percent of that. We also want to leave headroom for when we or ISPs have outages.

For future rollouts I am going to begin with 5% sampling. An average of 10 events/second seems pretty workable for Logstash, we'll still get a fair bit of data, and this gives us plenty of headroom in the event of a lot of temporally-correlated failures.

I'll do group1 tomorrow, and will continue on to all domains (group2 plus non-wiki domains) after the weekend.

Correct, I did not included chrome mobile which is about 17.8% of pageviews for last month, that would mean that (pageview wise). The total amount of pageviews by browsers that would send us reports is 44.2%. It makes sense that this would be an underestimate cause usage of wikipedia content that is not a pageview also matters for this purpose.

With the current 5% sampling, we're getting about 30 reports/second at peak times.

Extending NEL to all domains is going to increase our traffic by about 2.5x (assuming the same ratio of requests recorded / errors reported).

That would bring us up to something like 75 reports/sec at peak, which feels like it should be fairly manageable for Logstash (adding something like 7% to its overall load).

I think this is acceptable, but I'll be keeping an eye on things. At 5% sampling we're already seeing more error reports than I anticipated, given the previous ratio of requests/reports, so it's possible 5% is too much and we need to tune downwards.

This is now live on all WMF domains.

In the event that it needs to be backed out, don't revert the patch.

Instead, continue serving the response headers, but modify the NEL: header failure_fraction to be 0.0.

This is because NEL-enabled browsers cache the response header for the TTL we specify (24h), and a missing response header won't affect the state of that cache in any way.