Check diffs where the change is at least one paragraph after the section heading, such as

We haven't really tested or reviewed this, or at least I didn't… Ed wrote some unit tests thought, so it probably works.

The parent task was 9th in https://meta.wikimedia.org/wiki/Community_Wishlist_Survey_2019/Results so commtech may want to announce it has been partially resolved.

Thanks, @Esanders! I have updated the 2019 results page and the project page for the wish with this update.

Hello, @Esanders. I'm keeping eye on this as original proposer. So I've tryed, and I can't see any difference:

Looks like there are still some issues with inline changes.

Checked on production (en.wiki) on some articles with the visual diff containing at least one paragraph of change.

Hello, @Esanders. It looks different now, but has a lot of problems. It shows dozens of irrelevant paragraphs, and also shows empty section names.

Sure, I'll try to find some. It can take time, because I use usually the wikicode diff.
Here is the first one: link. It has many problems, let's pick one: the line
הועבר לדף שיחה:חיסון#חיסון והתחסנות
marked in the section
אפשרות ב'
when it should be in the section
חיסון והתחסנות
much lower.

Thanks, I can see that.

It actually appears in the same way in the wikitext diff:

In this picture, I drew three boxes around the three parts of the diff. Each part contains the actual changes, and some context before and after. Only the one section name visible between the boxes is added as a result of this task; the other ones are included in the "normal" diff context. 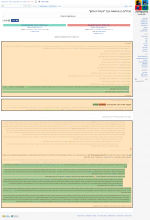 I think this diff looks weird because the "normal" context is so large (because it's a discussion page, which uses HTML lists for comments, and the entire list is included).

This is a bit ugly, but I think the diff is correct (and it's definitely not a bug caused by the changes to handling section names, it might be a separate issue).

Maybe we should display the "extra" section names differently, to distinguish them from the "normal" context?

I do not say if the first name should or should not be here. I do say the second name should be here for sure, the last header before the quoted line, and it's not here at all.

No. What I'm saying that if you display a part of section from any reason, you should not give her a wrong name. Nkw one can understand the line is the part of the wrong section. You can show both names, it will solve the problem. Or you can find another visualization.

Another possible solution: The line above was added for better orientation. Now, when we have section names, the line above the header is not needed any more.