I think that the default style of pre elements in Vector looks a bit deprecated. I noted that after seeing how Commons has customized the display of this, which I believe is worth consideration for the MediaWiki core IMO, too. In the Monobook skin, I think the dashed border is quite ok, but I believe that Commons' way of doing this fits better into the Vector skin than Monobook's implementation of this.

*Bulk BZ Change: +Patch to open bugs with patches attached that are missing the keyword*

Could you not have just removed the offending line?

This was reverted wasn't it?

That leaves the styling. Personally, I don't like the Commons styling anyway. Personally, I would change just the 'dashed' to 'dotted' and decrease the padding to 0.5em.

What is the status of this? You had some code already, going back and forth.

The overflow/scrollbar/wrapping part is bug 260.

The styles for the other part should now go into common/commonElements.css instead of vector/screen.css. Current styles are (still the same as in 2011):

The proposition here is:

This is closer to how Modern renders these:

I'm not sure if it's still a good idea to change these, given for how long they were there; I'll upload some screenshots in a while anyway.

The proposed looks good and matches the overall vector style.

+1. We've had this on Wikimedia Commons for a while, and it fits very well in the overal Vector design and even as a good default in general (so, Monobook as well).

The old style both has a too prominent border (dark blue) and grabs even more unnecessary attention by also being dashed.

The only thing we may want to adjust in the proposal is which shades of grey we use. Avoid introducing new shades that aren't used anywhere else that are almost the same as an already used shade.

I'd recommend we stick to #f9f9f9 for the background and not change it to the (darker) #f7f7f7. The difference is almost impossible to see, and this way it matches the background of the table of contents.

And for the border, #ddd instead of #ebebeb. Again, almost the same (#ddd is slightly darker) and matches (for example) the thumbborder of the common stylesheet used by both Vector and Monobook.

Comparison of the four styles (including Krinkle's proposal). 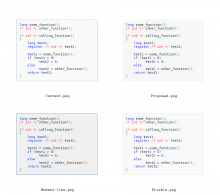 Reason:
Because Krinkle also fixed this