@WMDE-leszek @Jonas
Can you send me a screenshot of the current state? Does this need to have a full design, or is it, like I got from talking with Leszek mainly the edit mode and the language switching?

@Jan_Dittrich: this is how it would like now, if I try to make it look exactly as form representation (FTR: I am not saying it should look the same, e.g. glosses would most likely in general be longer etc than representation)

I just realized this screenshot actually is quite bad as it does not show the Senses section in the context of the whole page. OTOH the current looks of the page is not really something that is pretty in any way, and I guess it might not be the best idea to try to focus on existing stuff when designing new things.

Does this need to have a full design

I guess we could go with the above for the "read" mode for now, although I am quite convinced we agree this is not the way we want it.
There is no "edit" mode designed currently at all but we could say let's have a big enough text field for now.
What has not been designed so far, and I think there is nothing somewhat similar in the existing UI we could try to reuse for now is the fact that a single gloss would be available in multiple language (ie. there should be a "description of what a word means" in all language, not just the language the "word" comes from). So there should be a way to change the language of the gloss shown, or to show multiple language "versions". And also it should be possible to add/edit/delete glosses in multiple languages, not just my current UI language.

So I guess the answer to your question would be: at least "language switching" should be designed but if we could have all that would be amazing.

Here my first version for a design, with some questions attached: (@WMDE-leszek)

For instance, there might be more than single "Example" statements, translations will be modelled as statements, and there will plenty of other statements involved. Without a header that might be difficult to be rendered in a somewhat reasonable way, I guess.

I believe "Statements" header would be needed, unless we really want to make Sense look different than say Forms, or the "top" Lexeme in the regard of how they statements are rendered.

Yes, I was just thinking that it is a rather technical term and I wondered if we can get along without (since the hierarchy would still be clear)

For display, we shouldn't need a language selector here. The senses (glosses) would be shown in the user's UI language, with language fallback applied.
The selector only becomes relevant when trying to edit, or rather, when trying to translate a gloss into another language.

Hmm, OK, is there a scenario for it or something else that puts this into context? It is hard for me to understand what this is aiming for on a mid level of "what should the user be able to do with it"

After talking about it in the team:

So, next try with a table for the senses in different languages 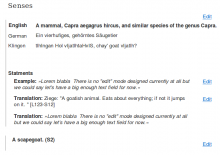 👍
Remaining small thing: The ID of the Sense 1 is not shown. Intentional?

Remaining small thing: The ID of the Sense 1 is not shown. Intentional?

No, was not intentional (though displaying IDs are a thing I tend to question) 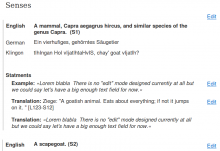