Reasons and blockers for SystemBlocks should not be stored as translated messages
Closed, ResolvedPublic
Actions

A SystemBlock (also a CompositeBlock) is created temporarily on enforcement, and is not stored in the database. These blocks are created in BlockManager::getUserBlock.

The block reason for this type of block is a message, which is translated in BlockManager::getUserBlock at the point when the block is created. If Block::getUserBlock is called before the user is initialized (e.g. T180050, T226777), the message is translated into the site language rather than the user's language, and a recursion warning is logged.

The block reason could instead be stored as a message key, and translated when it is needed.

(For some types of system block the same applies to the blocker, but the solution is a little more complicated - see T227005.)

It makes a lot of sense to set the message key as a property; the question is then when to translate it? A few possibilities:

Change 538448 had a related patch set uploaded (by Tchanders; owner: Tchanders):
[mediawiki/core@master] Allow block reasons to be stored on blocks as message keys

Note that I had to temporarily revert the patch above. It made AbstractBlock::mReason private without hard deprecation, and lots of extensions are accessing it directly. I apologize if this could seem an overkill, but better reverted than sorry. It can be re-applied without making the property private if it works for you.

Also, extensions will have to be updated to use getters/setters. I can try to give it a shot tomorrow-ish.

A reminder for something that puzzled me for a couple of minutes: tests where DatabaseBlock::mReason (note: NOT AbstractBlock::mReason) is accessed directly are likely not failing because a dynamic property is created instead. Nevertheless, this is not a good reason to make the property private, given the breaking change.

While I concur it shouldn't have been made private without updating callers first, I don't consider ~7 extensions "lots" ;)

While I concur it shouldn't have been made private without updating callers first, I don't consider ~7 extensions "lots" ;)

Everything is relative :) What I meant is, too many extensions to just push patches to any of them right now and hope that they land before the next wmf. branch is cut.

There's already https://gerrit.wikimedia.org/r/#/c/mediawiki/extensions/EventBus/+/544332/, I was waiting for CI to finish before giving a final approve.

when doing something anonymously at the autoblocked IP address, the block message is like:
Autoblocked because your IP address was recently used by "[[User:[INVALID]|[INVALID]]]". The reason given for [INVALID]'s block is: "Disruptive editing".

Change 545311 had a related patch set uploaded (by Tchanders; owner: Tchanders):
[mediawiki/core@master] Pass the target as a string to the reason Message for autoblocks

Change 545311 merged by jenkins-bot:
[mediawiki/core@master] Pass the target as a string to the reason Message for autoblocks

Change 545373 had a related patch set uploaded (by Tchanders; owner: Tchanders):
[mediawiki/core@wmf/1.35.0-wmf.3] Pass the target as a string to the reason Message for autoblocks

Change 545373 merged by jenkins-bot:
[mediawiki/core@wmf/1.35.0-wmf.3] Pass the target as a string to the reason Message for autoblocks

We have made a change to how we get and set block reasons. Therefore, I tried to test as many places where blocks get created or displayed, comparing beta with test (before the train, that is) or on my local environment (where I don't have permission on beta).

Testing creating database blocks and that the block reason is stored correctly in the database:

Display of block reasons (including creating system and composite blocks, which happens when the user's block is checked):

This included testing that the block reason is displayed correctly when using a non-default language (for blocks which have translatable reasons, i.e. composite and system blocks).

Also tested updating a preexisting block via Special:Block, and that the block reasons were/were not changed as appropriate in the database.

I tested most of the extensions we updated. Note that I was unable to get the block action working for the AbuseFilter extension. Nor did I systematically test the EventBus extension, although the fact that T227007#5590836 no longer occurs suggests it is fixed.

No longer occurs on test, the block message displays fine.

I no longer see the error on my local environment.

Note that I was unable to get the block action working for the AbuseFilter extension.

These are non-printing characters when viewed in HTML, but do appear literally in some API requests. For example, if your IP is blocked and you go to https://test.wikipedia.org/w/api.php?action=query&list=users&ususers=Drwpb5&usprop=cancreate, the output looks something like:

I think this behaviour was introduced more generally by the BlockErrorFormatter service in T227174 (which I did not notice at the time). I think this task has added it for a couple of new places (including Special:CreateAccount).

Note that I was unable to get the block action working for the AbuseFilter extension.

Thanks! So, I am attempting to get AbuseFilter to block a user when a particular condition is met.

However, when creating a filter, the actions section is just blank (see below). 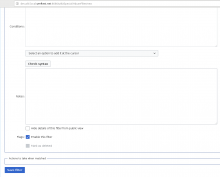 My user is a sysop.

However, when creating a filter, the actions section is just blank (see below).