As a Wikisource user, I want the WSExport gadget to be migrated to the Wikisource extension, so that I can access links to download books (via WSExport) on all wikis with the extension enabled.

Background: In the process of consulting with Wikisource users on the project talk page, we have learned that some users don't have the ability to click download links (such as "Download as MOBI") via the side panel and other places. This is the case on Czech Wikisource, for example. This is because they do not have the WSExport gadget enabled on their wiki. Rather than enabling it on each wiki, it would be more efficient to migrate the gadget over to the Wikisource extension. That way, all wikis that have the extension enabled can have access to the gadget. One important note about this ticket is that it overlaps with another wish (Migrate Wikisource specific edit tools from gadgets to Wikisource extension). However, it may make sense to include this as part of the ebook export improvement project, as many users cannot easily download books in their wikis at this time.

Pages to be updated

Gadgets removed
These gadgets have been removed, and only (optionally) need to be deleted by a sysadmin or local sysop:

stockText gadget
These apparently may not need any updates:

Mobile.js
These add a link to export to the mobile interface. The extension does not do this right now, so we have left these as-is:

Different Wikisources show different formats in the sidebar links. @ifried Should we make it configurable to match the status quo, or just have a set list? Also, which namespaces should the links be shown for? I was wondering if we should show it on all $wgContentNamespaces. I haven't actually checked them all, but it looks like lots of the 114s below are just because they copied the gadget code from enwikisource.

@ifried another question: should the extension prevent duplicate links from appearing? Or is it okay to have duplicates display for the short time between the new extension version being deployed and the old gadgets being turned off?

I'd thought to start with that we could look to see if the gadget is enabled, and if it is then not add the new links. But the links are not always added by a gadget (see full list below of every JS page that mentions 'wsexport'), and so we won't be able to prevent them all. I think it's probably okay to just not add them if either the WSexport or ePubDownloadLink gadget is enabled; sound okay?

We discussed this in our standup today, and we agreed upon the following:

The other text to finalize is that for the tooltips. At the moment it's:

Is 'Mobi' capitalized like that? Or should it be MOBI? https://en.wikipedia.org/wiki/Mobipocket

@Samwilson Thanks for bringing this up and apologies for the delay in response! While it seems like either Mobi or MOBI is acceptable, based on some quick research online, I think it probably makes sense to use MOBI (all caps). The other formats are capitalized in Wikisource, so it's better UX to have the same format. Also, I have found that some other online tools that deal with exporting or converting ebook file types use "MOBI" in all caps, so this would be a familiar user experience to many users.

Thanks @ifried I've updated the above patch.

Once it's merged and deployed we can go around and disable the gadgets in MediaWiki:Gadgets-definition on all the above wikis.

This is ready for QA now.

The Wikisource extension replaces the various WSExport download links in the sidebar, which were previously implemented via a gadget. E.g. 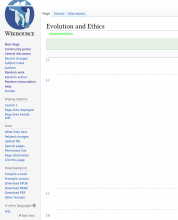 I have been able to use the sidebar links to export an epub on each of the wikisources in the "Pages to be updated" section above.

As far as I can tell we have removed the old gadget from each of the wikisources as well. If the old gadget is still in use on a site, the Wikisource extension will not add its own links.

I have briefly tested it on each skin. The links do not appear on Minerva, but they did not before on the gadget either.

The links do not appear on the mobile version of the site either, but many have custom gadgets/JS which add export links. We haven't touched these. E.g.

Some wikisources have banner which include wsexport links (the stockText gadget). We haven't touched this. E.g.

Currently, the sidebar links will only work for books in the main namespace. This will be fixed in T272038.

There are a few bugs I have raised:

I believe we should. It's the incubator for Wikisources and there was a wexport gadget their. I believe the Wikisource extension should be installed there too. I have opened T272163 about it.

@Samwilson First, many many thanks for the development of wsexport!
I would like to make two points. Have you considered adding a target = "_blank" attribute to the "Other formats" link so as not to "lose" the Wikisource page visitor? And ... do you consider selecting (configuring) a set of formats (links) for a given wiki?

One more thing - I think there should be no links to ws-export on non-existing pages, e.g. The Travels of Scarmentado.

Thanks for the feedback!

I would like to make two points. Have you considered adding a target = "_blank" attribute to the "Other formats" link so as not to "lose" the Wikisource page visitor?

And ... do you consider selecting (configuring) a set of formats (links) for a given wiki?

One more thing - I think there should be no links to ws-export on non-existing pages, e.g. The Travels of Scarmentado.

Good idea. The above patch does this and should be deployed soon.

Thank you, everyone, who wrote tickets to address the various questions and concerns that came out of this work, which we will individually analyze and prioritize as a team. As this work is now on production, I'm marking it as Done.