This task represents the work with estimating how the demand for Parser Cache storage could change over time.

The need for such an estimate emerged in the 1 July 2021 meeting between the Editing, Data Persistence, Performance, and Parsing Teams.

Marking as stalled for now pending parent task's being unblocked. I might still squeeze this in earlier, but it's not urgent right now.

One big takeaway here is that PC size is not correlated to the size of wikis or reads, it is mostly about Commons and Wikidata. The other half is other wikis. When it comes to records, 29.8% of all of ParserCache entries is commons. To explain how massive it is: It is bigger than the next eleven wikis combined (excluding wikidata, I'll explain below why).

You can basically assume something like this is could give a very rough esitmated number of records of the PC. The current total is 481M entries:

The 0.77 index is pretty consistent across wikis I checked. But A could be broken down to number of images in commons and number of pages (outside ns6). It would be something like 1.4 for files and 1.1 for the rest.

Commons is a big mess. We actually improved this with action=render clean up but it didn't have as good as effect as I hoped, for a funny reason. Each wiki is using uselang=, making it fragmented by language. So most of action render fragmentation now turned into language ones. It is good to have it anyway.

If you try to see the size instead of records, the percentage actually increases to 31%, it means average PC entry for example is slightly bigger than the average entries in ParserCache which I think is a bit surprising.

This seems to be combination of multiple factors here leading to this massive storage:

The number that should be in PC for this should be pretty low. We have made changes that avoids parsing and storing pages when a page is edited (assuming most of them are bot edits which don't need the parsed page) and yet still 10% of all PC records are from wikidata. In fact, if each edit still creates a record, it would account only for 15% of rows. Something else is in play here :/ Can it be dumpers? Can it be someone hitting HTML of our pages? I will dig in this.

In order to do a proper investigation on this (and possible improvements), I suggest we add logging traceback to parsing (sampled 1:128 maybe?). And dive into the data, How does that sound to you @Krinkle

This means we need to wait around a month and re-analyze everything.

After twenty days of the CirrusSearch change, now did a number check and number of entries in ParserCache has dropped by 5.6% which is around 27M entries. There are more work that can be done there and I will continue taking a look and work on that.

We have a decent redaction in PC save. Let's see how it ends up to be in a week or so:

I took a sample of read queries to ParserCache for a bit which gave ~36K read queries and given that I had the rough timestamp of query itself, I replayed it and collected exptimes. The result of distribution of exptime (per hour) is here: 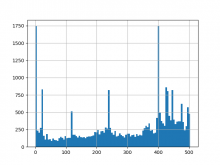 The first local optima shows up in around 40 hours (13%), so in extreme measures, you can set the expiry to forty hours and reduce the size of PC to 8% while still keeping 13% of hits.

One really interesting observation is the solid hit rate to expiry between 400 and 500 hours. While it's technically 20% of the PC, it provides 34% of the hits. This probably means we should increase the ttl to thirty days and revisit the value with new sampling. The optima seems to be somewhere above 21 days (but hopefully somewhere below 30 days).