Motivation
People should understand what they are looking it.

Mocks
No 2: Info i that brings back the info tour 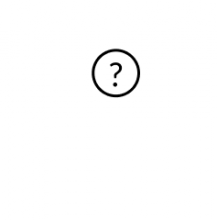 Texts for the info tour (with screenshots of the prototype's tour)

Some background on why I updated the texts for the tour:
It's quite likely that e.g. the other user changed a line in their version, but I didn't. So these two lines in particular don't show conflicting changes (as I didn't change anything in my line). "Diverging versions" or "difference between the two versions" is more fitting.

@Hanna_Petruschat_WMDE We need a RTL version of the first image ( colors flipped and ideally text right aligned ). Thanks :-)!

Here are svgs for the english and an example for arabic (as a RTL-version) for the tutorial pop up.

Edit: svgs are broken. So here are pngs in different resolutions:

There is something weird with the text underlying the search field 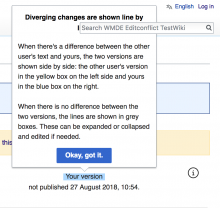 @Hanna_Petruschat_WMDE Can you have a look at https://tools.wmflabs.org/wmde-editconflict-test/core/index.php?title=Spezial:SimulateTwoColEditConflict and see whether the button pulse and the button disappearing once clicked + the rest is as you expected this to work?

The pulse is great.
The disappearing works as expected. One remark to the interaction though: When closing the popup, we enter the conflict handling page. If you don't know about the pulsating buttons it's relatively likely to not notice them or identify them as clickable. In a former version we had the behaviour of the first tour tip automatically being open when entering the page and when pressing "Okay, got it" being shifted to the next tour tip. Is that conciously being disabled?

There is something weird with the text underlying the search field

Oh yeah, that looks bad :-). Also it seems not trivial ( at least I did not find no way ) to make it display over the very top navigation and search field. To possible solutions for that:

Which one is more desired? @Hanna_Petruschat_WMDE

In a former version we had the behaviour of the first tour tip automatically being open when entering the page and when pressing "Okay, got it" being shifted to the next tour tip. Is that conciously being disabled?

Since you ask that now, I am not sure again, but have the feeling we talked it about it while estimating this task.... @Lea_WMDE do you remember what we decided there and what not? - Or: Do we want to reintroduce the "guided tour experience" as in the prototype?

@WMDE-Fisch for the overlapping talk to @Tonina_Zhelyazkova_WMDE @gabriel-wmde or @Tim_WMDE - they solved the exact same problem for AdvancedSearch :)
We did decide for the behavior described above, but that was when Hanna wasn't available. I'll discuss it with UX again, but let's keep the acceptance criteria for this ticket as is.

@Lea_WMDE @WMDE-Fisch Here is the change you are referring to:

Keep in mind it changes the position of the element and kind of throws it to the top of the DOM and positions it absolutely or something crazy like that, so double check that this does not break any behavior / styles for you (it was fine in our case).

FYI: I can not immediately reproduce the issue with the overlapping search field. In all my tests the popup window goes down, not up, and therefore does not overlap. This does not mean the bug is not there. It is, should be fixed, and will via T203066. But I don't like the idea of blocking a story that essentially asks for "having" an intro tour, when we clearly "have" that intro tour.

What I found instead is this bug:

Notice the mispositioned blue circles. To reproduce this all you have to do is to resize the browser window (e.g. make it fullscreen) before clicking the "i" icon. This is not far fetched, it can easily happen to regular users. Should this now also block this story from being done? Should I go on and find more bugs? I'm usually pretty good at this. What I don't like is that this boils down to timing: When individuals are fast enough to find bugs early enough before a story is closed as being done, we block it. But when I'm not fast enough, the bugs gets automatically prioritized a magnitude lower, because it now does not block a story any more, but is on it's own, competing with all the other open tickets. Typically this means the bug is not being worked on immediately, but months later, if ever.

This is not really a "process", but super unclear and confusing to me.

Also notice that the bullet point "The pulsating button that is on the editing box will disappear, if people start editing that box" is blocked on T195721, which we not started working on. Does this mean we need to actually block these two stories on each other? Or is it better to create a separate ticket to make sure we don't forget about this behavior?

This ticket is just about what is written in the description, not what is in the sub tickets. Current issues: The test does not run through yet, and we should have browser test.

Change 463106 merged by jenkins-bot:
[mediawiki/extensions/TwoColConflict@master] Make it possible to restart the tour once more