Overall, I'm quite satisfied with this internship. The project turned out to be very interesting and challenging (the way I like it!). I didn't finish everything that was planned, but the plan was quite ambitious from the start. Over the course of the internship I also stumbled upon many issues that we had not foreseen when scheduling the work, so overall I think I put a bit more effort in the project than planned. I will be finishing the work that I started in the coming months.

I have definitely learned '''a lot''', not only about PHP programming and testing, but also about software design, working with large codebases and more. Huge thanks to all reviewers of my code and my mentors, who were very helpful and gave me numerous hints.

This project affects many wikis in a significant way and it's quite satisfying to work on something that will be used by many. The best moment of this internship for me was finally deploying the finished manual reverts feature to Wikipedia and seeing it in action. Really cool.

Directly related to the project

Other things I may work on later

It would be valuable to be able to filter out or highlight edits that have already been "rolled back" or "undone". This task is about adding a "Reverted" filter to the Tagged Edits interface in MediaWiki-Recent-changes 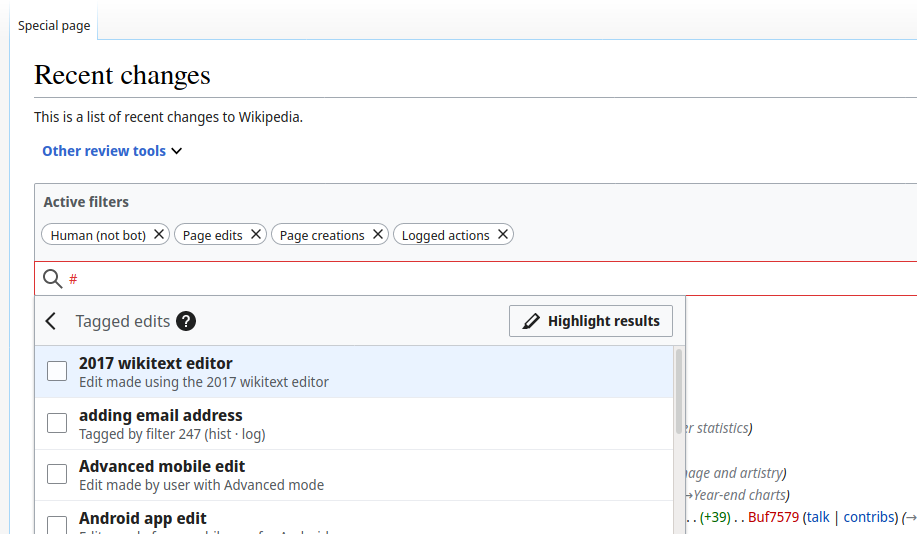 We will want to identify the edit that is being reverted and tag it with a "reverted" tag.

We'll need to detect when a revision is being rolled back / undone, and then apply a tag to the revision that it is rolling back. This involves defining a tag and implementing a hook which can apply that tag in certain conditions.

I think a lot of the logic for this can based on the discussion in T152434: Add method to Revision to check if it was a Revert, and whether an edit was Reverted. I want to implement this task as well, as a lot of the logic is overlapping, it's just the question of how we integrate these two functionalities together. I would propose this method to just check whether the revision has the reverted tag, as that would be present anyway. A useful addition may be a maintenance script for reprocessing all edits in the DB and applying the reverted tag retroactively.

I have worked a lot with MW (see section Past Experience), so I think a more ambitious approach to this project would suit me :)

@kostajh and @Catrope
I have not contacted them yet. I initially planned to do a completely different project and I focused on that. Unfortunately I didn't find anyone willing to mentor that (see T247406).

Note: due to the unexpected complexity of the reverted tag feature, I had to give up on implementing the maintenance script, at least for now. I hope the extra effort put into other parts of the project make up for it. :)

To schedule tasks, report progress and do most other dev things I will use Phabricator. The code will of course be in Wikimedia's Gerrit. As for communication I prefer IRC and email, but I can use any other means of communication, such as Zulip.

I study at the Warsaw University of Technology. I have a BSc in Computer Science and I am currently pursuing a MSc in Data Science (a CS equivalent). I think I stumbled upon the GSoC program accidentally while browsing mediawiki.org. During the summer I will not have any other significant commitments, I may be unavailable for a few days here and there, but I will definitely deliver everything on time :)

I'm interested in the idea of free culture and software, I currently lead a project dedicated to free humor (more in the next section). I think free culture and open-source software are vital for humanity and that is partially why I participate in MediaWiki-related projects.

I've been for over a year a system admin of a medium-sized wiki – Nonsensopedia, which is kind of like Uncyclopedia in Polish, but completely different in some regards, most notably it puts a much larger focus on proper licensing and making sure everything there really is free and funny. It also has much stricter standards regarding hate speech and controversial stuff.

I am also a sysop of this wiki, so I am very familiar with Special:RecentChanges interface and other MediaWiki moderation tools.

By being a sysadmin I gathered a lot of experience with installing and maintaining MediaWiki. Over the last year I also wrote a few MW extensions for Nonsensopedia that could be useful for other wikis as well, you can find them listed on my user page. All MW-related code I wrote is on our GitLab group, including some forks of extensions and other tools.

Two of the extensions I wrote use OOUI for their interface:

I also attended the Wikimedia Hackathon in 2019, which really got me interested in MW development. I met a lot of interesting people there that helped me do a lot of this stuff, thank you! During that hackathon I worked with Isarra on THICC, an extension that was supposed to utilize Multi-Content Revisions heavily. We never finished it, but I had to get an understanding of MCR in the process :)

As for other programming experience I wrote things in all kinds of languages (C, C++, C#, PHP, JS, Lua, Python, R, Matlab, Forth, 6502 assembly, yeah, I'll stop), but of course I am not proficient in all of them :) I did a lot of university and hobby projects and I also wrote a few commercial applications (databases, production management, webdev, office automation). No programming can of worms scares me :)

@kostajh @Catrope Though the deadline is in the next ~24 hrs, if you have any feedback to share here, please do! We tried to find mentors for a project proposal that @Ostrzyciel pitched. It was a promising proposal, I think, but we couldn't find folks to mentor.

I'm adding @Halfak to this so it can be on his radar, since he's been part of previous revert-related discussions in various places. He might also want to read through the discussion in T252366 to get a sense of how this project defines a "revert".

Google-Summer-of-Code (2020) is over! I believe you have already documented your project here https://www.mediawiki.org/wiki/Google_Summer_of_Code/Past_projects#2020. If not, I would encourage you to do so. Also, is there anything else remaining in this task to address? If not, please consider closing this task as resolved.

Google-Summer-of-Code (2020) is over! I believe you have already documented your project here https://www.mediawiki.org/wiki/Google_Summer_of_Code/Past_projects#2020. If not, I would encourage you to do so.

Also, is there anything else remaining in this task to address? If not, please consider closing this task as resolved.

There is still some work that was planned for the project that isn't finished yet. I plan to close all the remaining tasks in a month or two, when I manage to merge all this stuff.

Ah, right. Should have closed this some time ago. :)