The new ORES topic models have a more extensive ontology than what we originally implemented for the morelike version in T238610: Newcomer tasks: include topics in intro overlay and T238612: Newcomer tasks: topic filters.

In the morelike version we have 27 topics, and we show 12 by default, with the other 15 appearing when the user clicks "show more".

The way we will use the ORES ontology (as described in T244192: Newcomer tasks: ORES ontology mapping and score thresholds) will give us 39 topics, and we have broken them into four headers. Therefore, below are specifications on how we want to change the topic selection experience in both the topic overlay and the topic filter dialog.

This interactive prototype shows how the topic filter should behave with the new topics:

Though the prototype only shows the topic filter, the same changes should be made to the topic overlay, shown when the user initiates the suggested edits module.

And if we want to see how this will look in our target languages, there are also the analogous prototypes below, which are controlled by this spreadsheet (which initially has Google Translate translations, but can be altered by our ambassadors if we wish):

In T238610#5861323, @RHo listed visual design issues with the original topic overlay that contained morelike topics. That task has been resolved, and those outstanding issues are listed below, and should be addressed in the process to update the overlay and filters to contain the ORES models.

For Design review - the line spacing and font (?) for "We'll try to suggest..." subheading looks different from the mockup.

Yes, besides this item, there are other small visual design issues with the topic tags size and spacing.

1. Minor visual fixes to the topic ‘pills’
(i) Height of topic “pills” should be 36px (mobile and desktop)
(ii) More spacing around topic text is expected
(iii) When the topic is selected, there should be ore spacing between text and checkmark icon, and icon from RHS edge of pill

The above items can be fixed by changing a few properties on the following classes:

2. Desktop-specific items
(i) Dialog should not change height when “show more” is tapped
(ii) Add an extra 10px space between the topic intro text and the first row of topics
(iii) From T243365 - topic intro text should not wrap underneath the overlay illustration.

3. Mobile-specific items
It looks like the mobile version of the topic overlay was not covered in the review, and there are a few differences between expected vs actual. 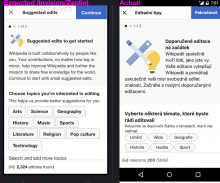 @RHo -- I'm putting this in your column for two reasons:

@RHo -- I'm putting this in your column for two reasons:

– Yes, we should still have the toggle select/select all topics under each header.

@RHo -- could you please also comment on how this overlay should work? Like should the messaging at the top scroll away? Or should it stay stationary as the user scrolls the topics below it? Also, right now, when the user clicks "show more", it changes the size of the overlay to accommodate. Should the overlay size not change once we have these ORES topics? 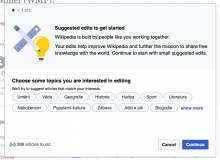 What exactly should be shown before the user clicks Show more? Or does that feature go away entirely?

Under each header, the relevant topic pills should be shown alphabetized, according to alphabetization of the language.

If we want to be serious about that, we'll need to support sort keys in the configuration; alphabetic sorting typically cannot be fully automated.

What exactly should be shown before the user clicks Show more? Or does that feature go away entirely?

In this new version with about ~10-12 topics per header, that is no longer needed.

Under each header, the relevant topic pills should be shown alphabetized, according to alphabetization of the language.

If we want to be serious about that, we'll need to support sort keys in the configuration; alphabetic sorting typically cannot be fully automated.

TBH I am not as convinced alphabetical sorting is super-necessary based on the small number of topics per heading, but wonder if we could support other sorting criteria (popularity of topics selected, # articles in each topic, or even randomized order)

@Tgr -- if we don't implement alphabetical sorting, what will the sorting be governed by?

Currently we use the same order the topics are listed on the configuration page; we could always keep doing that. That gives the community full control (and can be used for sorting alphabetically) but is not very convenient to manipulate, copy to new wikis etc.

We can add a sortkey field, that is fairly trivial. It was mostly just a note to myself to not forget that. (Or we can omit it; possibly it will be never needed. I'm only familiar with lexicographic sorting in Hungarian, there you only need the sortkey for compund words where the word boundaries combine into a fake digraph; that's pretty rare. And maybe for foreign words, which probably won't show up in a topic list.)

Sorting by random is easy but seems very confusing behavior to me. (Or do you mean random but non-changing? That's still easy, we can hash the names or something like that.) Popularity / number of articles is more work, we'd have to store those somewhere and update periodically. IMO not worth the effort unless we really think that way of sorting will make a difference.

Now that @RHo has created the interactive prototype that I've put in the task description, this is Ready for Development.

The main part of this (the new UI for ORES topics) is now in code review. Next, I'm going to work on separating the topic preferences for morelike vs ORES, so that when we switch to ORES, everyone's topic selections will be blank and they'll see a blue dot (per a conversation with @MMiller_WMF). After that, I'll work on the design tweaks that the task description asked for.

The topic pill buttons should be organized under four headers, in this order (regardless of language):

Because of how T246061: Newcomer tasks: Sort topics alphabetically was implemented, what happens instead is that the headers are sorted alphabetically, by (translated) header name. This means the order is not the same as what you asked for, and it will also be different in different languages depending on how they translated these names. If you still want to use the fixed order that you asked for, that would ideally be done in the backend. Right now, my frontend code just displays the topics and groups in the order they come from the backend, and doesn't attempt to reorder them.

The section order is configurable at the bottom of MediaWiki:NewcomerTopicsOres.json - apparently I misremembered the order and happened to end with one that's also alphabetically sorted in English. I'll update it.

Change 575752 had a related patch set uploaded (by Catrope; owner: Catrope):
[mediawiki/extensions/GrowthExperiments@master] TopicSelectionWidget: Do not resize dialogs when "show more" is clicked

Change 575752 merged by jenkins-bot:
[mediawiki/extensions/GrowthExperiments@master] TopicSelectionWidget: Do not resize dialogs when "show more" is clicked

@Catrope says that some of the design changes @Rita Ho asked for would cause our "pill" widgets to diverge from the ones in MachineVision. There's no technical issue with that necessarily, but we wonder if those changes shouldn't be made in both.

@RHo, do you have an opinion on this?

Also -- as of today, part of the design changes listed in the task description are merged, but the rest will be done next week.

@Catrope says that some of the design changes @Rita Ho asked for would cause our "pill" widgets to diverge from the ones in MachineVision. There's no technical issue with that necessarily, but we wonder if those changes shouldn't be made in both.

@RHo, do you have an opinion on this?

Thanks @MMiller_WMF and @Catrope , I agree that it would be ideal if the changes would be made in both. So looping in @AnneT and @mwilliams – I'd like to propose both teams update the pill/tag widget in the following ways:
(a) Taller height - particularly as the current height is smaller than ideal for tap targets on mobile devices. Proposal is for 36px height (same as buttons)
(b) More padding around text in selected tags - adding a tiny bit more breathing room between text and checkmark with the left and right edges of the pill.

Note that I have kept the spacing around each pill different on CAT vs Suggested edits as per the implementation. I would also suggest reducing the space between tags on CAT.

@kostajh is going to manage fixing the padding/margins on mobile this week before the train hits production. See issues below:

@RHo Makes sense to me! I'll update my mock ups and work with @AnneT to get that updated!

This looks good to me doing the design review on Chrome:

@Catrope @kostajh @Tgr -- @RHo brought up a good question around instrumentation. With the morelike version, we logged an event when the user clicked "show more". The ORES version doesn't have "show more" -- it has "select all" and "remove all". I just tried in beta, and I don't think we have events for those. If we don't, that's okay, but I'll file a separate task to add them later. Let me know!

Yeah, we don't have events for those.

Also the above the fold / rest differentiation when logging selected topic types doesn't make sense anymore and should be removed.

Checked in betalabs - all look identical to the screenshots @RHo added.

@MMiller_WMF - moving to PM review to let you know that the adjustments have been made and checked; the phab task can be markedas Resolved. I'll do additional checking after wmf.22 deployment.